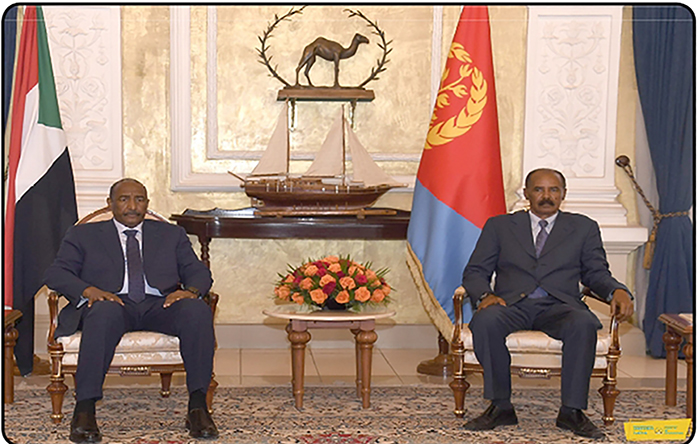 *Editor’s note: Around the world, 2020 was turbulent, challenging, and a year truly unlike any other. This article, reviewing the period from September to December, is the third in a three-part series that looks back at some of the important events and developments that unfolded in Eritrea during 2020. Parts I and II were published in earlier editions of Eritrea Profile.

Meskerem, the 9th month, began with Eritreans around the world observing the 59th anniversary of the beginning of Eritrea’s armed struggle for independence. In Asmara, events at Cinema Roma included cultural programs, musical performances, drama programs, and poetry reading highlighting the unity and resilience of the Eritrean people.

Days later, on 7 September, the President of Sudan’s Sovereign Council, Lt. Gen. Abdul Fattah al-Burhan, arrived in Asmara for a one-day working visit. During his stay, he held discussions with President Isaias about the progress of bilateral ties, and the two leaders agreed to intensify efforts to bolster regional peace. Osman Saleh, Eritrea’s Minister of Foreign Affairs, and Yemane Gebreab, the Presidential Adviser, also attended the discussions.

Other diplomatic activities included Eritrea’s participation at the annual United Nations General Assembly (UNGA). During the 75th session of the UNGA, FM Osman Saleh delivered a message on behalf of President Isaias covering a number of topics, including COVID-19, cooperation, and peace. As well, on 30 September, Tesfai Ghebreselassie, Eritrea’s Minister of Land, Water and Environment, delivered a statement at the biodiversity summit. His comments included a call for greater global cooperation. 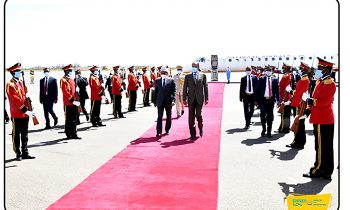 Regarding development, as part of the effort to expand educational opportunities and eradicate illiteracy, it was announced that eight elementary schools in Sel’a sub-zone, Gash Barka region, were under construction. Additionally, the Governor of Anseba region, Ambassador Abdela Musa, conducted a tour of inspection at the ‘Sutur’ dairy cattle breeding project in Hamelmalo sub-zone. Other events included: residents of Habero sub-zone conducting soil and water conservation activities; renovation of roads in Mai-Mine sub-zone, Southern region; extensive soil and water conservation campaigns aimed at redressing the environment issues and increasing agricultural productivity in the Northern Red Sea Region; the installation of audio-visual equipment and digital libraries in middle and high schools; and the continued development of a new dam in the Mihdaf administrative area, Afabet sub-zone. As well, on 28 September, the Ministry of Agriculture organized a workshop in connection with World Rabies Day.

September also saw continued efforts to combat the threat of desert locusts. Surveillance demonstrated that locusts had spread to different parts of the country. The response included communities, local and regional officials, members of the Ministry of Agriculture, and the EDF. On 4 September, the Minister of Agriculture, Arefaine Berhe, commended the public and the EDF for their efforts.

Notably, His Holiness Abune Petros, Plenipotentiary at the Office of the Patriarch of the Eritrean Orthodox Tewahdo Church, gave benediction on the occasion of Kudus Yohanes. In a public message, Abune Petros extended warm wishes to all, especially health workers and those safeguarding the nation’s sovereignty. Later, on 27 September, Meskel, which commemorates the Finding of the True Cross, was celebrated at St. Mary’s Church. The event was conducted in accordance with COVID-19 guidelines and restrictions.

The month of October featured important diplomatic activities. On 4 October, the President of the Federal Republic of Somalia, Mohammed Abdullahi Mohammed, arrived in Asmara for a two-day working visit. During the visit, President Mohammed and President Isaias held talks at State House focusing on bolstering mutual ties and increasing efforts for regional integration on the basis of the Tri-Partite Agreement signed between Eritrea, Ethiopia, and Somalia.

Less than two weeks later, from 13-15 October, President Isaias, accompanied by FM Osman Saleh, and Presidential Adviser Yemane Ghebreab visited Ethiopia. There, the delegation, which was joined by the Eritrean Ambassador to Ethiopia, Semere Russom, visited the Grand Ethiopian Renaissance Dam (GERD), various development projects, and the headquarters of the Ethiopian Air Force in Bishoftu. During the visit, Ethiopian and Eritrean leaders engaged in discussions on bilateral ties and the consolidation of regional cooperation.

Also, on 13-14 October, an Eritrean delegation led by Biniam Berhe, Charge d’Affaires in the Mission to the African Union (AU) and Economic Commission of Africa (ECA), participated at the 37th Meeting of the AU Council of Ministers. At the meeting, conducted virtually, the Eritrean delegation delivered a message outlining the country’s position on a number of issues.

Notably, the nearly month-long cultural competition organized by the EDF concluded on 10 October. At the awards ceremony, attended by General Filipos Weldeyohannes, Chief of Staff of the EDF, and Ambassador Zemede Tekle, Commissioner of Culture and Sports, various prizes were handed out to individuals and cultural groups in different categories.

Food security is a fundamental concern in Eritrea. During the commemoration of World Food Day, on 16 October, a statement from the Ministry of Agriculture outlined how the Minimum Integrated Household Agricultural Package aims to meet food and nutrition security. Such initiatives have been vital during the global COVID-19 pandemic.

Sticking with development-related matters, efforts continued to be taken to enhance the quality of service of Barentu Regional Referral Hospital, including through upgrading equipment, while community programs, such as soil and water conservation activities, road repair, and water diversion schemes, were ongoing in Anseba Region. Importantly, with locusts active in many parts of the country, Eritrea continued to take measures to ensure that damage was minimal.

Finally, October concluded with the celebration of Mewlid al-Nebi on 29 October. Celebrations at Asmara’s Grand Mosque Al- Khulafae Al- Rashidin, were conducted virtually and broadcast on Eri-TV, Dimtsi Hafash, Radio Numa, and Radio Zara. Mohammed-Seid Beshir, Chairman of the Awkaf in Asmara, discussed the historical background of the celebration, while Mufti Sheikh Salim Ibrahim wished a happy Mewlid to all and urged patience and resilience in the battle to control COVID-19.

As with the rest of the year, November witnessed many development-related activities. These included: soil and water conservation campaigns in South Denkalia sub-zone and Asheti and Sosona administrative areas, Barentu sub-zone; planting of trees in Shelab administrative area, Akordot sub-zone, and Foro sub-zone; seminars on agricultural productivity, use of pesticides, and animal health for locals in the Northern Red Sea region; workshops in the Southern Red Sea region on seed standardization; and efforts to increase provision of social services in Dahlak sub-zone. Additionally, efforts continued to be taken to control the spread of locusts, while in Mendefera and Barentu, citizens conducted voluntary blood donation drives.

Furthermore, the Ministry of Agriculture conducted a nationwide livestock vaccination program aimed at ensuring animal health. In total, about 1.5 million animals were vaccinated against various diseases. In Assab, it was reported that efforts were ongoing to upgrade equipment at the Assab Hospital. Reports also revealed that during the past several years, the number of medical doctors and healthcare workers had significantly increased, helping improve health service in the region. Finally, in Asmara, the Office of the Auditor General, in conjunction with the Eritrean Center for Organizational Excellence, conducted a workshop for civil servants and internal auditors from 9-20 November. The workshop, attended by 55 participants, focused on developing skills, improving efficiency and effectiveness, and preparing a five-year national strategic plan.

Also in November, the Intergovernmental Committee of Senior Officials and Experts held its 24th meeting. The meeting, conducted on 24-25 November, was attended by fourteen East African states. Participants gathered under the theme, “Economic and Social impacts of the Covid-19 Crisis on Eastern Africa: Strategies for Building- Back-Better”. In his opening speech, Eritrean FM Osman Saleh thanked the ECA for organizing the meeting and commended countries for tackling various challenges. In addition, Ambassador Tesfamichael Gherahtu shared Eritrea’s experiences during the pandemic.

Finally, PFDJ and NUEW branches abroad conducted meetings. The PFDJ branch in Germany had meetings via virtual format from 24 October to 14 November. Those participating in the meeting included Yohannes Weldu, Charge d’Affairs of the Eritrean Embassy in Germany, Head of the Public and Community Affairs, Kahsai Tewelde, and Head of Public Diplomacy and Media, Teklu Lebasi, along with numerous members. Similarly, NUEW branches in Italy conducted an annual assessment meeting and laid out plans for 2021 in relation to the unfolding era. Heads of the NUEW branches in the Italian cities of Genoa, Milan, Brescia, Parma, Bologna, Pisa, Pistoia, Rome, Napoli, Teramo, Pescara, Catania, and Florence participated at the virtual meeting conducted on 15 November.

The final month of 2020 began with the commemoration of World Aids Day on 1 December. In a public message, Ms. Nigisti Tesfamichael, Head of the HIV/AIDS and STDs Prevention Unit at the Ministry of Health, shared that Eritrea has made considerable progress in the fight against HIV/AIDS. Also on 1 December, the nation marked the 50th anniversary of the Ona and Besekdira Massacres. Commemoration events, which included laying wreaths, were attended by Ambassador Abdela Musa, Governor of Anseba Region, other government officials, village elders, and survivors.

Regarding development, the EDF was deployed to Tesennei sub-zone to support local communities in crop harvesting activities. As well, in Assab, initiatives were continued to expand water supply projects, while in Haikota sub-zone, tree planting activities were carried out to redress environmental damage. Additionally, in Gash Barka, the Ministry of Agriculture organized a seminar on the environmental impact of agricultural projects, while in Gelalo sub-zone, a seminar was held on health and traditional medicines. Finally, the National Agriculture Research Center in Sheib sub-zone completed a multi-year research project identifying select crop seeds.

Among the most exciting moments of the month was the graduation ceremony held at Orotta College of Medicine and Health Sciences in Asmara on 19 December. In total, 471 students graduated in various fields, including general medicine, dentistry, ophthalmology, pharmacy, public health, and nursing, among others.

Although Eritrea’s response to COVID-19 had been generally successful and effective throughout the year, there was an increase in positive cases late in the month. As a result, the High Level Task Force on COVID-19 issued further guidelines in order to curtail the spread of the virus and to guarantee the safety of citizens.

Finally, the NUEW conducted several activities to conclude the year. On 5 December, the European branch of the Union held its annual meeting led by Tekea Tesfamichael, President of NUEW, and Negisti Tsegai, Chairwoman of the NUEW Europe branch. Representatives of the Union from Denmark, France, Germany, the Netherlands, Italy, the UK, Norway, Sweden, and Switzerland also participated. Then, on 12 December, Tekea Tesfamichael conducted a seminar with NUEW members across Europe, covering a range of topics. Similarly, in Italy, Eritrean communities gathered for meetings to review the year’s activities, plan for 2021, and mobilize support for Eritrea’s campaigns against COVID- 19 and desert locusts.