Birth of a Lake Part I 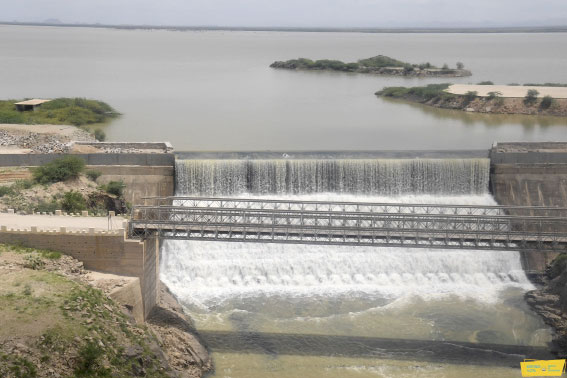 Eritrea’s resolve to develop and bring about social change has been seen in its Government’s determination to transform its agriculture hinged on building dams. The construction of Kerkebet dam, the largest dam in Eritrea, is a case in point.

Kerkebet dam was built along Barka River with a view to augmenting the water resources of Eritrea and changing the ecosystem of its surrounding. Barka River, the second largest seasonal river in Eritrea, flows from the highlands to the vast plains of the Gash-Barka region. Therefore, harnessing this river of a big magnitude required careful planning as any slight mistake could lead to flooding.

Before the construction of Kerkebet dam, extensive preliminary design and feasibility studies were carried out to explore and select a suitable site. An evaluation of the quantity of water that could be retained and its value compared to the cost of the project over the anticipated years of operation were carefully studied. A wide range of other factors that could affect the environment were also considered before deciding the dam’s optimal size and configuration.

The scoping, planning and engineering work of Kerkebert dam involved many parties and was done using local experts. The dam has become a fountain of life in the arid region where it is located, and with the construction of the concrete barrier, the river now retreats for about 14 kms.

The Engineering Support Task Force and the Eritrean Mapping and Information Center (EMIC), at the Office of the President, conducted an extensive survey that could help in the development of water resources around the vast and fertile plains of the Gash- Barka region.

Based on the studies, which included geological studies to identify the types and properties of rocks at the river bed, a suitable area at the narrowest bed section of Barka River had to be identified as the dam’s site. As a result the narrow gorge around Afhimbol became the dam’s site.

According to Eng. Kidane Berhane, head of Engineering Support Task Force at the Office of the President, although studies had been carried out prior to 2009, detailed hydrologic and geological studies were conducted to evaluate whether the foundation was prone to fracturing and to check the amount of sedimentation of sand and soil at the riverbed.

Highlighting the challenges encountered during the construction of the dam’s foundation, Eng. Kidane said that clearing the underground water and sedimentation and, generally, the excavation and cleaning process would have been not only demanding but the foundation would have been very shaky. For this reason, a decision was made to build the foundation through piles using a BG drilling machine that has a diameter of 80 cms.

Kerkebet water resource development project was initiated to make use of the vast fertile agricultural areas in Kerkebet sub-zone. Barka River, which has an annual flow of over 300 million cubic meters, flows from the central highlands to the northwest of the Gash-Barka region.

Mr. Getachew Merhatsion, general manager of EMIC, said that Kerkebet dam was constructed with a vision of cultivating around 26,463 hectares, which does not include the 2000 hectares of farm land in Afhimbol. So far, around 10,000 hectares have been leveled in Aamalait as a first step in preparation for the envisaged larger farm projects.

All infrastructures, including the building of the dam, that are needed for large scale farming, are put in place. Big water tanks that have a storage capacity of 20,000 cubic meters of water have been erected on high ground to pump water to the vast agricultural areas through gravity.

Kerkebet sub-zone is a very fertile area conducive for the cultivation of all kinds of cereals and oil seeds. Getachew said that around 18 species of sugar cane have been planted to multiply them for use in a variety of soils. The pilot project has shown a remarkable outcome of up to 21 brix of sugar content per hectare. Good harvest has also been obtained from cotton and groundnut plantations. Groundnuts cultivated in other areas of the country have a yield of 38 to 45 shoots while that of Kerkebet is 75 to 80 shoots, a testament to the fertility of the area. 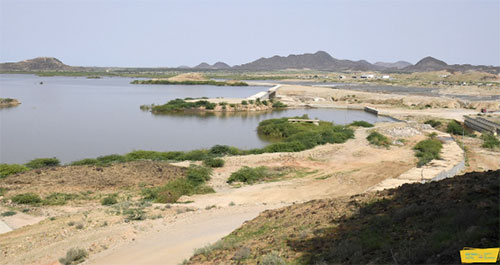 The 330 million cubic meters of water impounded in Kerkebet can transform Eritrea’s agriculture. Getachew said that by growing wheat alone, it is possible to grow the economy not only by saving foreign currency through import substitution but also by developing dairy farms through animal feed made from the byproducts of wheat. Similarly, cotton plantation will pave a way for the development of cotton processing plants while the cultivation of oil seeds will open a venue for the development of food processing plants. These will lead to agro-industrialization.

Teamwork and commitment of all who participated in the construction of the dam have made the birth of the enormous lake a reality.

(The contribution of companies and other partners in the construction of Kerkebet dam will be the subject of a follow-up article.)