Apprenticeship in Eritrean Families – the Cornerstone of Children’s Later Life 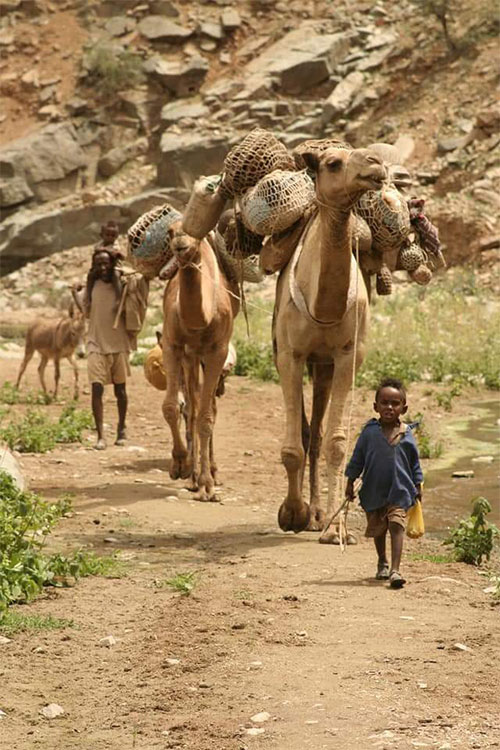 After months of hard-work, most Eritrean farmers start to relax in January. Their hard-work starts in May, before the beginning of the main, summer rains. By July they finish tilling their plots of land and sowing them, and sometime later, another activity begins: the weeding of fields. By December, they finish harvesting the crops and they are ready to relax. During these months, after school, the children of the farmer contribute their shares of labor and, through involvement, learn the knowledge and skills necessary for survival as farmers. Parents take special interest in the apprenticeship of their children.

Parents do not equip their children with skills and knowledge only but also with useful attitudes and imbue them with their values. Children start looking after their parents’ sheep and goats early in their childhood. Once they become a little older, Eritrean fathers teach their sons how to plough the field, and all the activities related to farming. They are taught how to yoke the oxen and plough the field without hurting the animals, the farmers’ golden goose. They are also taught the value of diligence and hard-work, and through the numerous stories they are told, they learn social-friendly behavior and acts.

Through the society’s proverbs, in which it has stored its experiences and wisdom and with which Eritreans grace their utterances, they learn what made the society as it is – its strengths, its attitudes to life, and its challenges.

The roles of the father and the mother differ, and they share their different experiences with their children. Work in Eritrean communities is separated along gender lines: some activities are only for men while others are strictly for women, and for this reason, men and women have different experiences to share with their children, fathers mainly ‘training’ their sons as mothers coach their daughters.

The mother plays her role and teaches her daughter cooking and brewing skills, and shares what she has learnt through years of experience, and what she, in turn, learnt from her mother. It is obvious that young women in towns can learn some of these skills in cooking and other schools. The daughter, as with the son, doesn’t learn only skills and knowledge but also the society’s attitudes: what makes a good wife, an attitude not always kind to women, which she doesn’t get from cooking schools. Later, the young woman realizes these do not reflect her abilities and ambitions, and cannot determine her destiny, or even her role in society. She also learns to challenge them and, through her work and determination, to prove the society wrong about the ability and capacity of women.

Eritrean mothers take these informal lessons very seriously because they are aware that if (in the eyes of the community) their daughters failed to prove themselves as skillful wives later in their married lives, people would not blame the daughter, but her. In other words, the views and attitudes of the society play such a crucial part that they influence the mothers’ efforts as they prepare their daughters for their later lives. They are aware of the significance of: “Ngual kitfelT, Ade reay.” (To understand a young woman, observe her mother.” The implied meaning is that mothers influence their daughters so much that the latter adopt the beliefs, attitudes, and values of their mothers to a large degree. It imparts the same meaning as “like father, like son” does to English language speakers.

Offered beauty or skills, a proverbial Eritrean woman chose beauty. “Melkie habeni ember WuHlnetsi kab gorebietay ElqHo”. (“Give me beauty,” the woman is reported to have answered, “for I can borrow skills from my neighbor.”) I have no doubt that, offered the same choice, a great number of women from around the world would have no different choice. This, however, doesn’t show that Eritrean women do not value skills. They are keenly aware that lack of such skills in their daughters would result in their disgrace because the possession of such skills is highly prized by the society. In the rural areas, for example, suwa, the Eritrean local drink, is part of the farmers’ menu most of the time, and his wife is expected to hone her brewing skills. Once she did, she passes it to her daughter. Similarly, a woman, who can’t cook properly is no woman. For this reason, the mother personally takes it upon herself to impart these skills and takes herself as her daughter ’s teacher, trainer, or coach.

In towns, parents start taking interest in their children’s future immediately after their children start going to school, especially if they want them to acquire skills the parents themselves do not have. If the children didn’t do well academically by middle school, many parents decide to attach their children to a garage, a bicycle repair-shop, or a place where they want them to get some technical skills. Many of the mentors do not pay the children (but give them only pocket money) because they are assumed to be giving the parents a favor by taking their children under their wings and teaching them the skills of their trade. Such apprenticeships, though not financially profitable to the children, provide them with skills, which they use to their advantage once their apprenticeship is over. Many of the carpenters, mechanics, and other technicians in our towns acquired their skills through such apprenticeship, under some experienced technicians.

In such apprenticeship sessions, parents give the first-born a special attention. It is believed among parents that if they trained and shaped the first-born well enough, his siblings would follow in his or her steps. I don’t think that is a wrong conclusion . Such attention on the first-born puts a lot of pressure on him or her, and causes conflicts with parents. If the parents successfully diffused the conflict, and are effective, the first-born, in turn, coaches his or her siblings, and in turn begins to influence them.

Successful parents use this approach in almost all areas, where they want their younger children influenced. For example, in academic matters, they busy themselves only with the first born (if they don’t have time for every child) and the first born, later on, does the same to his younger brothers or sisters. For this reason, except in rare cases, an academically successful first-born has other academically successful siblings trailing behind him or her, as long as the parents supervised their children’s progress, and aided them, which the first born cannot deliver.

An Eritrean story best shows how such sessions influence children, and why Eritrean children act the way they do. A man decides to burgle a house as quietly as possible and he decides to take his son along. They approached the house, the target of the father’s illegal act. However, before they got in the man checked his surroundings to see if anyone was observing. He looked to his left, to his right, and behind him.

The son, aware of the activities of his father and his intentions, told him. “Daddy, you have looked behind you, to your right, in front of you, and to your left. There is one direction you haven’t checked.”

The child reminded his father about an important lesson: a crime is still a crime, even if no human-being observed it being committed. Above human law, the child reminded his father, another law forbids people from committing acts that hurt fellow human beings, and people should listen to their  consciences before they commit themselves to an act of breaking the law.

Now, it doesn’t surprise any Eritrean that an Eritrean child (who could use the money in any way he likes, and no one would know he has that money) submits a wallet stashed with money to the police, which, the Eritrean Police magazine, Hizbn Polisn, often reports.

Eritrean parents give their children these stepping stones to a better enriched knowledge, and more pragmatic attitudes, which the children themselves must develop, test, and use during the rest of their lives. These steps are laid in the children’s lives during their impressionable age, form the foundation stones of their adult lives, and continue to influence them long after their parents, their first teachers, are dead and buried.