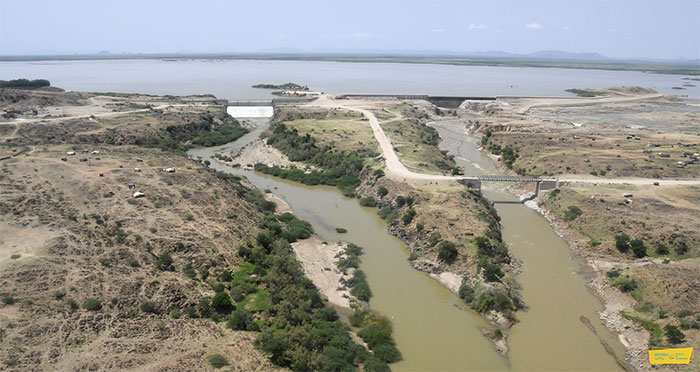 The assignment given to Keyih- Bahri Construction Company to build Kerkebet Dam was the first of its kind and, therefore, quite demanding which included the installation of piles for the foundation and erecting concrete panels in the construction of a 23-meter high dam. But the company’s competence in the construction of bridges proved useful for such an exclusive opportunity.

Before moving to Kerkebet, Keyih-Bahri Construction Company was engaged in the construction of major bridges in Alebu and Tokombia, Gash-Barka region, and other parts of the country using a newly introduced BG 22 drilling machine, which was instrumental in the construction of the dam’s foundation.
In 2009, a team consisting of Mr. Mebrahtu Mael, Manager of Keyih- Bahri Construction Company, along with other construction experts moved from Massawa to Kerkebet to carry out a preliminary assessment of the suggested dam’s site. At that very time, the team came to understand the challenge of building a dam in an arid zone that is characterized by a hot climate and sand ridge which needs deep drilling of over 20 meters to get to the inner most part of a metamorphic rock at the riverbed.

Work on the dam’s foundation was to be completed before the rain started flowing from the highlands. So, BG machine operators and members of the Eritrean Defense Forces worked day and night to speed up the construction and help make the project a reality. While the construction of the foundation was underway, extensive preparations were made in mobilizing the needed machinery, including around 25 heavy trucks, crushers, loaders, bulldozers, excavators, and construction materials to the dam’s site.

The foundation of the dam was constructed 22 meters below the surface, penetrating the sand ridge accumulated in the riverbed; this increased the underground water resource. “This development increased the underground water level of the areas 20 km away from Kerkebet,” Mr. Mebrahtu said. “Residents of Kerkebet sub-zone and other localities reported that their surrounding has been transformed to wetland owing to the construction of water retaining structures.”

Mr. Salah Ahmedin, a member of Adi-Halo Infrastructural Projects and former member of Keyih-Bahri Construction Company, said that the first phase of the construction of Kerkebet Dam, especially the finalization of the foundation, attests to the project’s success in boosting both underground and surface water of Kerkebet sub-zone. “Once the piles for the foundation were erected, we were able to harvest water after drilling just one meter, which is indicative of the site’s richness in underground water,” Mr. Saleh elaborated.

The challenge the company encountered due to an early start of the rain season in the highlands was quite worrisome as water filled the construction site. This challenge required exceptional expertise of the company’s young engineers who worked day and night, including on holidays, to come up with a remedial solution to the heightening threat that could wash away everything along the site. Mr. Saleh said that amidst such a challenge President Isaias’s frequent visit to the construction site was a great motivation for them, boosting their capacity to move forward for a better accomplishment.

The construction of concrete dam along Barka and Aliet rivers and an earth embankment around Amalaiet had to go simultaneously to get rid of possible flooding through any of the embankments that were under construction. “We had to construct the reservoir and the three sections were to be finalized as soon as possible. The construction of this massive dam required over 70,000 cubic meters of stone, 20,000 cubic meters of mortar and over 600 quintals of steel, and all these were carried out against wind, hot climate and freezing nights,” Mr. Saleh explained.

The company had also to prepare floating water pumps to be used in the distribution of water to the farms through the active engagement of skilled general metal workers and plumbers who played an instrumental role in the installation of pipe lines for the development of large farms that transformed Kerkebet sub-zone into a green area, giving livestock herders easy access to animal feed.

By 2013, major infrastructural works, including the construction of the dam, installation of water pipe lines along with other facilities were accomplished. After achieving the set out plan, the team that participated in the construction of the dam moved to Adi-Halo to launch a vocational training center to train the youth in a variety of disciplines with a view to boosting the number of skilled human resource in the fields of agriculture, general metal works and operating heavy construction machineries among others.

As Barka River flows for more than six months in a year, the construction period was seasonal (mainly January to April). Applauding the concerted efforts made to build the strategic dam, Mr. Mebrahtu said that the construction of a 17-meter high wall of the dam was completed in just five months with active participation of members of the Eritrean Defense Forces. Machine operators, construction workers and technical experts had to work from 16 to 18 hours a day while others were assigned in four shifts, and each shift had 250 workers. The construction work continued at night which shortened the construction period and minimized the operational cost.

In the period between 2015 and 2020, the trained youth from Adi- Halo moved to Kerkebet to do additional work such as the installation of concrete panels of six meters to raise the overall height of the dam from 17 to 23 meters, bringing its capacity to 330 million cubic meters of water. As excessive water changed the dam’s structure, in March 2020 another team from Adi-Halo engaged in the 4th and 5th phases of the dam’s construction which involved an expansion of the spillways, installation of extra water tanks and pipe lines and other construction work.

Eng. Mohammed Ata, Deputy Manager of Bidho Construction Company, said that the company’s prior experience in the construction of dams and roads contributed to the successful completion of the earth embankment section of Kerkebet dam. “Rain was the main constraint we experienced during construction which forced us to speed up our pace with the deployment of adequate machinery and around 200 diligent workers,” Mr. Mohammed explained.

In 2014, Bidho Construction Company built a 3.4 km-long earth embankment to ensure that water flow from Aliet and Barka sections of kerkebet dam is retained in the expanded structure, leveled over 10,000 hectares of farm land and built roads linking the farm area with the dam.

Mr. Mebrahtu finally said that Eritrean and expatriate visitors expressed their appreciation of the construction of this massive dam by relying on local resources and expertise and the ingenuity in modifying machineries to suit particular construction needs. He added that the encouragement and tour of inspection from the leadership was quite motivating for the workers, and the experience gained in Kerkebet has transformed Keyih-Barhri Construction Company and boosted its con-fidence in building similar dams, including Gahtelay Dam.

Through integrated team work of construction companies, local communities, members of the Eri-trean Defense Forces, regional and sub-zonal administrative bodies and other partners, and at a total cost of around one billion Nakfa, the birth of this massive dam became possible.

Apprenticeship in Eritrean Families – the Cornerstone of Children’s Later Life