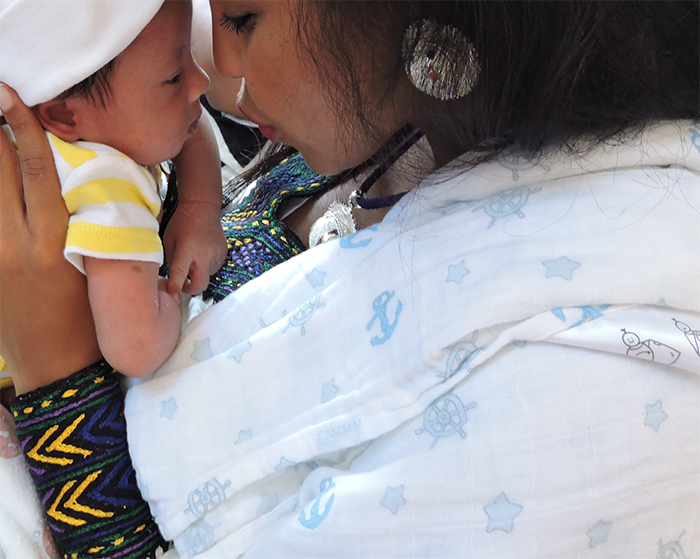 In rural highland Eritrea, when a woman gives birth, another woman passes titiqo (boiled beans, wheat, or chickpeas) door to door throughout the village. Through this act the family announces the birth of their baby to the village. As a result, everyone in the village comes to know about it on that day. In some places, the titiqo is passed only to the neighbours and the family’s close relatives.

I had no idea why such a custom is necessary. After all, if its purpose is to inform the village of the birth of a baby, sooner or later the village will come to know about it. So, why waste food and trouble someone and send her on an errand to inform the village? I didn’t see the reason behind it until a friend, an older man, explained it.

“You see,” he said. “People were not well-off in the past. And a woman who has a child needs many things. One is milk. Most probably many women’s families had no sheep, goats, or cows. In short, no animal that could give them milk.”

“The woman that has cows,” he explained, “understands the lactating woman’s needs, and also knows who can provide milk and who can’t. In a village everyone knows everyone, and few things remain secret.”

At nightfall, carrying a jug of milk the woman (who owns cows, sheep, or goats) visits the woman who had a baby. She delivers the milk and returns to her house secretly. No one knows about this except the receiver of the gift and her family. Neither does the benefactor’s husband; and if he does, he doesn’t say anything against her action. She doesn’t talk about it to anyone, not even to her close friends. She understands this as her obligation, and not as something to crow about. It is a taboo for Eritreans to speak about their good deeds, including their bravery, their intelligence, and even the favour they do other people. It is thought indecent. Other families offer injera, yoghurt, or whatever they think is useful to the woman.

The birth attendants welcome the baby with ululations. If the woman had her baby in a hospital, neighbours welcome her and her baby in the same way when she comes home. In the Tigrigna, the baby-boy is more preferred, and is welcomed with seven rounds of ululations. Baby-girls get only three rounds.

Girls experience such prejudice at birth, which continues throughout their lives. (Incidentally, in the Kunama culture, which treats its females with respect, males and females are treated equally.)

These days, the custom is being challenged as women are practically demonstrating they are not dependent on men, and they don’t need to be males to serve the society. Now, they take responsibilities reserved in the past for males and accomplish them successfully. However, as customs do not die so easily, and they can’t be decreed away, this and other customs, such as female genital mutilation, though weakened considerably, still continue to be practised.

After the birth of her first baby, the woman doesn’t return to her house from the hospital but goes straight away to her parents’. Immediately, she assumes a number of new and difficult responsibilities. She has to learn how to wash the baby, which is not an easy feat for a woman who had her first baby. She has to fathom what ails him and be his doctor, until she takes him to a doctor, if he is sick. She has to breastfeed him and look after his other needs. And she is expected to learn all these immediately after delivery, because the baby’s needs cannot wait.

In addition, she has to meet her needs, which are not few and not easy to meet taking her circumstances into account. In these circumstances, the presence of her mother is indispensable. She becomes the baby’s maid and nurse, and her daughter’s tutor about baby-care during the first few months. The mother’s knowledge, experience, and the role she plays during these days is so big that if young people try to reverse the order of things and acted as if they are more experienced than their elders, they are admonished with a saying related with this circumstance: “This is the daughter teaching the mother about labour.”

Of course, the woman’s mother-in-law can assist if she lives with her in-laws, a circumstance not uncommon in Eritrea. In fact, in rural highlands the newlyweds start their married lives in the compound of the groom’s parents. The parents build the couple a hut or a small hidmo in the parents’ compound, and they live there until they have a house of their own. However, despite the parents’ goodwill to the newlyweds, the bride and the mother-in-law develop mutual ill-feelings to each other. This happens partly because the groom shifts his love from his mother to his wife. Moreover, now that he is married, his parents do not have access to his services, a loss his mother keenly feels. A Tigrigna saying explains this feeling best: When is a child loved best? When he starts talking. When is he disliked? When he starts a family.

It becomes all the more necessary for a woman to have her first baby in her parents’ house if she lives alone, or in a compound with ‘complete strangers’ and, therefore, do not want to be bothered by the worries and problems of other ‘complete strangers’. Many Eritreans in towns live in such places though their neighbours can hardly be called complete strangers, as some become their best friends, though a few also become their worst enemies.

Child-birth is a difficult time for a woman, a time when she wishes to have relatives, especially her mother, close beside her. (Ironically, the closest person to a woman during this time, her husband, is not wanted. Neither does the culture encourage him to be beside her bed, as she gives birth to their child. According to the culture, child-birth is a women’s business. The man is told the news, whether it is good or bad, after it has transpired.) Psychologically, due to the uncertainty of how it would unfold, coupled with the pain and lack of experience, the circumstances leave the woman tense and very worried. If unassisted medically, it could go wrong and may even cost the woman her life. For these and other reasons, she needs someone that reassures and encourages her so that all her troubles would be over soon.

Therefore, a woman has her first child at her parents’, as the custom requires. As the custom also requires, the husband should buy a sheep and have it slaughtered, for her benefit. Such food, it is believed, helps her replace the blood she lost during child birth. In fact, this food is specifically hers, and she is not supposed to share it with others.

He also makes sure that his wife has butter and flour to make porridge, the food served to visitors. Often she is fed porridge, which is believed to help her regain her strength because porridge is carbohydrate-rich food.

The rationale behind many birth-related customs is not apparent. Some do not seem to serve any real purpose. But, if one digs a little, one sees the needs they fill, and how they serve a useful purpose. In fact, some pass some useful knowledge to the young generation, which young women (could not in the past) get in any other way.

“My Success is an Outcome of Everyone Who has Supported me”, Dr. Lidya