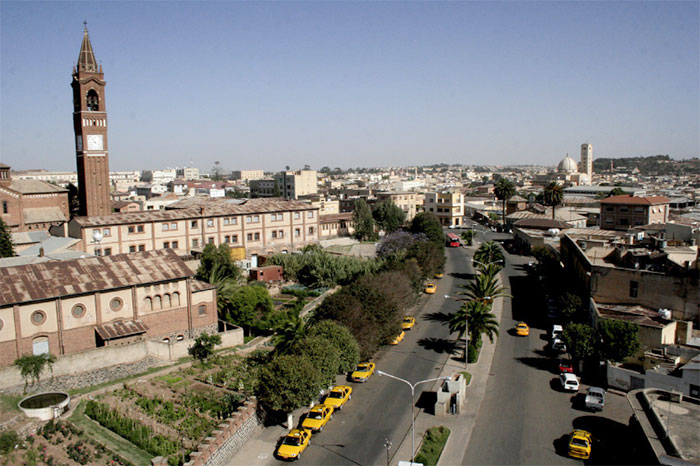 Asmara, at an altitude of 2325 meters above sea level, and its modernist architecture have received worldwide recognition, especially after it was included in the UNESCO world heritage list. Although its master plan was designed and the city constructed by Italian colonizers, it had been inhabited long before the advent of the Italians.

Towns and trade centers have been significant features of the Eritrean society for a long time. The ancient port city of Adulis and Dibarwa, the political center of Bahri Negaasi, are just two examples. Archaeological research carried out in the Greater Asmara area is giving important new insights into the development of sociopolitical complexity in the northern Horn of Africa. Archeological findings show that the earliest settled highland agro-pastoral communities known in the Horn of Africa were established in central Eritrea, around Asmara.

Asmara is now known both by its rich archaeological assets beneath and by its unique and distinctive architecture above. The biggest mosque, the church, the elaborately designed streets and the outstanding buildings give Asmara a unique and uncontested beauty.

In its modern form, Asmara was primarily built during the Italian colonization. Throughout the fifty years of Italian colonization Asmara underwent a major transformation and rapid growth in terms of population, size and socio-economic development. But after the defeat of Italy in 1941, the British Military Administration dismantled significant infrastructural assets that were laid down throughout the country, including Asmara. Britain followed a policy of destruction and looting which had a negative impact on the direction and momentum of Eritrea’s journey in the succeeding years. The urbanization and modernization of Asmara was halted.

Under the British Adminstration and Federation, Asmara was haunted by riots and demonstrations against foreign domination. The Association of Love of Country, Mahber Fqri Hager, the first political organization in the history of Eritrea, was established in 1941 in Asmara. The one time industrial and administrative center of the Horn of Africa turned into the hot bed of movement that called for independence. After the annexation of Eritrea by Ethiopia, Asmara was deindustrialized deliberately. Modernization was replaced by outright stagnation and destruction. Factories were dismantled from Eritrea and moved to Ethiopia, and this aggravated the condition. But from its establishment into Eritrea’s independence, Asmara was able to withstand all the difficulties.

After independence, the Government of Eritrea made a prudent decision to preserve the architectural heritage of Asmara. To that effect Asmara Urban Forum was organized in 1995 to discuss and find ways to preserve Asmara’s architectural heritage. After serious and meticulous efforts an application for the city’s inclusion on the UNESCO world heritage list was submitted in 2016. These initiatives were finally rewarded by the inclusion of Asmara in the UNESCO world heritage list the following year. The inclusion of Asmara into the world heritage list is a great success for the promotion and preservation of Asmara’s architectural treasury. Architecturally, Asmara has no parallels in Africa. On many occasions many observers have described it as ‘Africa’s secret capital of modern architecture’, ‘Piccolo Roma’, ‘an ideal modernist city’ and ‘breathtaking city with a modernist layout’. Asmara has, without doubt, a beauty that can fill visitors’ hearts with amusement.

The peace, serenity and harmony of Asmara are rare and exceptional in the region and in Africa. Many expats and tourists frequently acknowledged the unique nature of Asmara. One of these expats once said: “The most dangerous thing that could happen to you in Asmara after dark was to stumble on a piece of broken paving. Ironically, a capital that had witnessed so much violence [during the war for independence] was blessed with an extraordinary tranquility; it breathed peace in time with the cicada’s rhythmic rasp. Asmara was certainly the only African city in which not only was I regularly offered lifts by strangers, but I accepted them without hesitation”. Indeed, Asmara is the most beautiful and peaceful capital on the continent.

Compared to the capitals of other countries, Asmara is small and has a relatively small population. But it’s a city of diverse cultures. On the streets of Asmara it is common to find people who speak different languages. Asmara is a city where churches and mosques are constructed side by side and Muslims and Christians live together in harmony.

The architectural beauty of the city alone does not make Asmara popular. It is the social harmony of the people who live in Asmara and the architectural beauty of its buildings together that embellish the city. In the same vein, the city center, which is home to most of Asmara’s modern buildings, is incomplete without the periphery in making Asmara the beautiful city that it is. The renowned Eritrean writer and historian, Alemseged Tesfay, has very succinctly brought this idea home in his article ‘A Short Note on Aba Shawl’. He wrote: “One cannot speak of Asmara’s unique heritage without giving due credit to the zone that helped it acquire its exalted status… Inclusiveness and tolerance to ethnic, religious and cultural diversity, traits that Asmara still holds dear as its special heritage, were bred in Aba shawl.” In short, the social interaction and cooperation of the communities in Asmara is in itself a heritage that 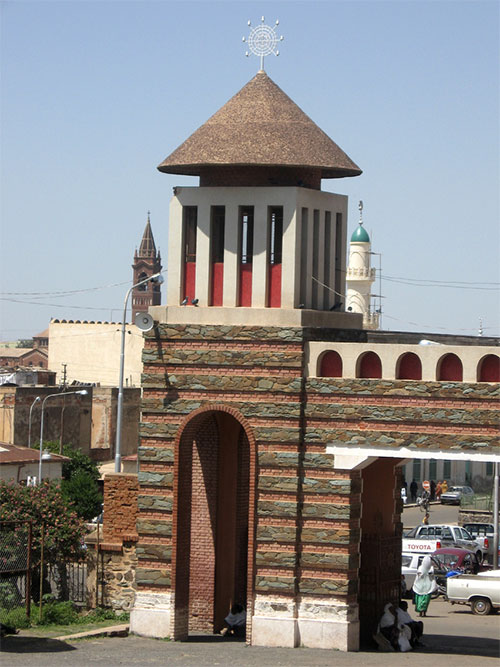 Asmara is not just a city in Eritrea. It has a central place in the social construction and national psyche of Eritreans. Asmara is home to all Eritreans. An intense feeling of belonging to Asmara is demonstrated by every Eritrean. Asmara carries great buildings and great history. The names given to the buildings and streets of Asmara reflect the past and future aspirations of Eritrea. Edward Denison highlights the symbolic meaning of Asmara during the struggle for independence in the following words. He said: “Asmara became an object of love and longing that found various forms of cultural expression… through the thirty year war of liberation. Asmara became synonymous with the final act of liberation”. Asmara is by far the most praised city that attracted the attention of artists in Eritrea. Artists use their talents to praise the social and physical beauty of Asmara. Many songs have been dedicated to Asmara. The thirty-year struggle for independence was concluded with the liberation of Asmara. In his novel ‘Towards Asmara’, Australian writer, Thomas Keneally, who visited the liberated areas in the late 1980s, reflected the longing of the EPLF freedom fighters to control Asmara and thereby liberate the whole country.

To accommodate its ever rising population, Asmara may be expanded and modernized, but care must be taken to preserve not only its physical beauty characterized by its modernist architecture but also its human and social beauty characterized by its people and their way of living. After all, even if urbanization may be a precondition for development, if cities and towns are left to develop without control, it can have negative effects.