Indian National Day and the Indian Embassy in Eritrea 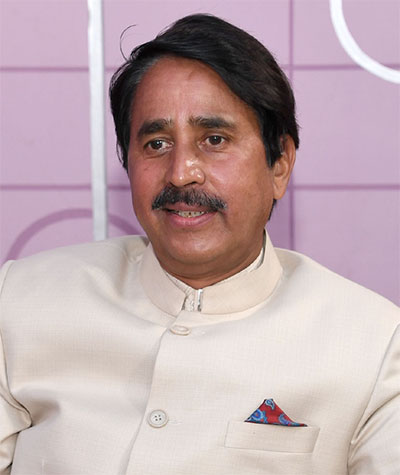 It has been a year since India opened its Embassy in Eritrea. This time last year, we interviewed Mr. Subhash Chand, India’s Ambassador to Eritrea, regarding the bilateral relations of Eritrea and India. On the occasion of the 72nd anniversary of the National Day of India, which was celebrated last week, we have interviewed the Ambassador to get an account of his past one year’s work in Eritrea.

My pleasure and thank you for inviting me for this interview; it’s an honor.

The Republic Day is the day India became a republic and adopted its own constitution after an intricate exercise of about three years after Independence Day. It is celebrated on 26th January and is mostly marked as the adoption of the ideal constitution of India. This year in Eritrea, we celebrated the 72nd Republic Day of India at the Embassy. I, as the Ambassador, unfurled the tricolor, which was followed by the National Anthem. Then I read out the Honorable President’s address to the Nation. I hope things will go back to normal soon and we will be able to celebrate the holiday in a grand manner next year.

The year 2020 seemed to present a great deal of suitable ground for the growth of the Indo-Eritrean relations. But not so long after the year started, things turned bad due to the outbreak of the Covid- 19 Pandemic. Since then, it hasn’t been easy to do or say much without the outbreak getting on the way. It led to total lockdown of almost the whole world by March. The pandemic has infected more than 100 million and killed two million people. As we speak right now, reports of infections and deaths are soaring all over the world. This outbreak has had severe impacts on all countries, including India and Eritrea. Luckily, India is on its way to recovery, but I can’t say the same for many other countries. 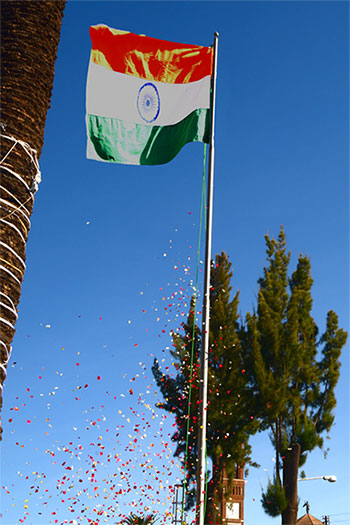 As I mentioned earlier our march towards achieving great things has been halted due to the onset of the pandemic. Before things went wary in March, we had been able to set the pace by sending about 20 Eritrean professionals for a variety of capacity building courses in different parts of India. We had three of them stuck in India due to commercial flight ban but we managed to bring them back home in August 2020 when the lockdown was a bit relieved. In the meantime, we have six Eritrean scholars already selected for post-graduate studies in Indian Universities. They are waiting to join as soon as the lockdown is relaxed in India. Since most universities have started accepting International students, I believe they will be leaving soon. 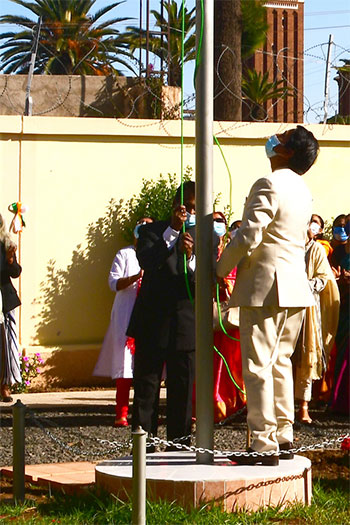 On the level of cultural interaction, we were able to give a glimpse of Indian cultural diversity by organizing an event that showcased Indian ethnic clothes on our National Day at Asmara Palace on 26th of January last year. Students of the Indian Community School, who are of different nationalities, entertained the guests with Indian songs from different parts of the country. Few youngsters from the state of Punjab charmed the audience with a Punjab traditional dance called Bhangra. In addition, we had two Eritrean artists perform that day. One of them sang an old Indian song and Mr. Barnebas, a famous Eritrean artist, sang a song which was very dear to Mahatma Gandhi, the Father of our nation. Moreover, we were about to celebrate the festival of colors Holi in March when the whole world went into lockdown.

On 21st June 2020, the International Yoga day, we roped in a few young Eritrean yoga practitioners to participate under the Covid-19 guidelines. Similarly, I have observed an enthusiastic participation of Eritrean Children and adults in other cultural events organized by the embassy from time to time. One of the advantages we had has been the presence of Indian teachers, professionals and construction workers in Eritrea, all of whom have been the building blocks of our sound relationship with the nation. It was based on the trust that we have built with what we have so far.

You are right; there has been a nearly complete lockdown in Eritrea with only essential and emergency services running. With significantly few cases and no deaths till December, we were feeling safe thanks mainly to the Government of Eritrea’s strong preventive measures and wholehearted participation from the people as a whole. Naturally, we humans find ways to adapt ourselves to shifting situations and new realities. Hence, when physical interaction was no more normal, many events in India turned virtual. Our Prime Minister and other dignitaries started interacting through virtual modes of communication. Many business events were held online. The Embassy started online streaming of those events with the participation of Eritrean experts in various disciplines. We have been able to organize 15 events with the same patterns so far and continued to do so until today, with fresh enthusiasm every time.

Well, many positive steps have been taken. The Embassy has been working on being a responsive place for our Eritrean friends to come over and interact with us. We have happily received many visitors in our Embassy and their queries have been well answered. Moreover, I am happy to inform you that in few days’ time, we will be ready to issue Indian visas and there will be a flow of visitors to our Embassy premises, which is located at the heart of the city next to the iconic Cathedral building. 2021 seems to have started on a positive note with the vaccine being rolled out and the world coming to grips with the pandemic. We now look at health, education, agriculture, mining, renewable energy, vocational education and training and capacity building as sectors where immediate and mutually beneficial cooperation is possible.

Like many other countries, India has also been affected by the pandemic. However, the government of India took immediate prevention by enforcing strict lockdown, commercial flight ban and many other measures by which the virus’s impact can be curtailed to a limited range. Predictions noted serious calamities in India but nothing of that sort happened. In fact, we have observed a recovery rate of 97%; death rate has been comparatively low and the infections have been continuously decreasing. Soon enough, we expect to reach a full recovery rate. We have resumed inter-state travel with strict guidelines. We have arranged flights for foreign nationals, including Eritreans, and diplomats who were stranded in India, and brought in more than 3 million Indians from all over the world to their homes. As for the vaccine, we have manufactured a large amount of Covid-19 vaccines, undertaking a mass vaccination drive and we are supplying medicines and other healthcare items to several countries to alleviate people’s suffering and lack of access. India is a major producer of all vaccines, filling 60% of vaccine demands globally.

As I mentioned last year, this Embassy has been opened to give a concrete shape to our relations with Africa, in general, and Eritrea, in particular. During his address to the Ugandan Parliament in July 2018, our Prime Minister enunciated ten principles of our engagement with Africa, and the opening of the Indian Embassy in Eritrea is a step in that direction. India and Eritrea have had close relations for centuries and it is now time to further strengthen the ties. On the cultural front, Indian movies have been popular in Eritrea for a long time now and as I observe, it is very common to see older people humming old Indian songs, which ties the knots.

Thank you very much for your time!