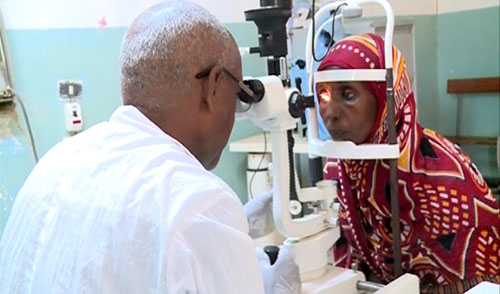 A couple of days ago, it was reported that health facilities in the Northern Red Sea region of Eritrea have been providing important eye treatments and conducting blindness prevention programs for citizens across the region. According to the reports from regional and national health authorities, the prevalence of trachoma within some parts of the country has either been significantly reduced or almost eliminated in recent years.

As with several other development-related announcements in the past several weeks, including those concerning dams, maternal health, child mortality, and the containment of desert locusts, the recent announcement about eye treatment and blindness prevention is extremely positive and encouraging. It also offers a timely and useful opportunity to take a deeper look at eye health, which is an important health and development issue.

Since independence, Eritrea has been confronted with a number of health and development-related challenges. Through a tremendous amount of hard work and substantial investment the country has been able to make significant progress, notwithstanding its relatively modest resources, nearly decade-long illegal sanctions, and highly challenging regional socio-political and environmental context. One of the clearest testaments of Eritrea’s improvement and progress is the fact that it was one of the few countries that entered the United Nations Sustainable Development Goals period having achieved most of the Millennium Development Goals targets on health.

Over the years, an area of special focus for the country, albeit one less discussed, has been visual impairment and eye health problems. One particular challenge is cataract, which is a medical condition where the eye’s natural lens which lies behind the iris and the pupil is clouded. Globally, it is one of the leading causes of vision impairment and blindness, with approximately 65.2 million people afflicted with the condition.

Another eye health challenge of note has been trachoma. The leading infectious cause of blindness worldwide, trachoma is a devastating eye disease caused by infection with the bacterium Chlamydia trachomatis. It is spread through contact with infective eye or nose discharges, either directly from person to person (e.g., through personal contact via hands, clothes, towels, bedding, etc.) or mediated by flies that have been in contact with discharge from the eyes or nose of an infected person. With repeated episodes of infection over many years, the eyelashes may be drawn in so that they rub on the surface of the eye, with pain and discomfort and permanent damage to the cornea. Trachoma is common among preschool-aged children, who harbor the principal reservoir of infection. As well, women are blinded nearly four times as often as men due to their close contact with infected children.

According to data from the World Health Organization (WHO), a specialized agency of the United Nations, trachoma is a public health problem in 44 countries and responsible for the blindness or visual impairment of nearly 2 million people. Based on estimates for 2020, across the world about 137 million people live in trachoma endemic areas and are at risk of trachoma blindness, with Africa being the most affected continent.

In Eritrea, cataract is the main cause of avoidable blindness, while trachoma poses a risk in some parts of the country. Importantly, a number of measures and interventions have been undertaken in order to address these issues and ultimately improve people’s lives.

In terms of cataract, screening programs in health facilities throughout the country have been expanded in order to better determine if people require surgeries. Also, training and skills development programs have been provided to local health workers to improve their skills and provide critical experience. The outcome has been that more people suffering from cataracts in the country have been able to receive necessary surgical procedures and experience the restoration of vision.

Importantly, the barriers that often serve to stop people from accessing eye health services have also been targeted. There have been numerous public education and community campaigns to raise awareness of the symptoms, risks, and availability of help for cataract, while expansions in road infrastructure and transportation services have led to greater access, particularly for the socioeconomically disadvantaged and rural populations. As well, many facilities have provided vision rehabilitation, including assistive products such as glasses or white canes, to patients.

Similarly, there have been multifaceted efforts to address the scourge of trachoma. Since risk factors influencing the transmission of the disease include inadequate hygiene, access to water, and access to and use of sanitation, improving access to water, sanitation, and hygiene have been at the root of the response. For instance, the country has made great investments in improving access to water and sanitation, both in households and communities, while the topics of sanitation, hygiene, and facial cleanliness have been featured and promoted within community events, schools, and health education programs. Notably, the number of people living in areas that warrant treatment with antibiotics, facial cleanliness, and environmental improvement for the elimination of trachoma as a public health problem has been reduced significantly – about 70% – in less than a decade.

Furthermore, during the past few years, thousands of patients have undergone operations to treat trachomatous trichiasis (which is the late, blinding stage of trachoma), while Eritrea has also mass distributed antibiotics (such as azithromycin) to prevent and treat trachoma. (At risk individuals in trachoma-endemic communities older than six months are offered an annual single oral dose. In the last decade, Eritrea has acquired about three million packages of antibiotics.)

It is well worth noting that treatment, services, and medications are provided free of cost. This demonstrates the nation’s deep commitment to the right to health and ensuring that all are able to receive care, regardless of socioeconomic status or other distinction. Another important feature of Eritrea’s comprehensive response has been its partnership and close cooperation with international partners and organizations. For instance, through a longstanding partnership with the Fred Hollows Foundation, Eritrea has been able to produce cost-effective intraocular lenses for cataract surgeries. Moreover, local ministries and educational institutions have collaborated with international partners to improve the capacity of local eye health systems so that they can deliver high-quality services. Moreover, the partnership with the International Trachoma Initiative has been important in the distribution of antibiotics.