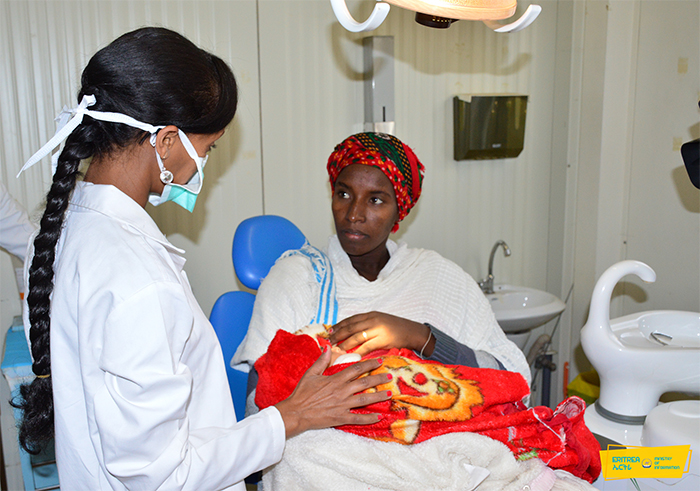 Throughout the course of history, women have been an indispensable part of the provision of healthcare. From midwives to herbalists, from nurses to surgeons, their contributions and achievements have been vital to health and medicine. A study conducted by Langer et al. in 2015 states that women deliver health care to around five billion people globally and contribute about 3 trillion USD annually to global health. Many of the global health milestones reached over the past half-century wouldn’t have been possible without the involvement of women. According to the World Health Organization, in 2013 women accounted for 70% of the health and social care workforce worldwide while in Africa, they accounted for 54%.

Looking back at our own history, women made up almost one-third of the liberation army during the struggle for Eritrea’s independence, and many of them worked as health care providers in various areas of health and medicine. Nurses, physicians, pharmacists, lab technicians and first aid workers (both male and female) worked side-by-side to provide healthcare to freedom fighters and civilians in liberated areas. There was no gender discrimination, and there were no gender differences when it came to getting the job done. In fact, it was an era marked by female empowerment, where women were active participants in the decision-making process. This period of our history ascertained that gender equality is not a faraway aspiration, but an attainable goal.

The level of competitiveness the women have exhibited in their academic performances is impressive. Overall, 85 students graduated with special mentions in the class of 2020 (earning a distinction, great distinction or very great distinction status), and of these 46 (54.1%) were women, outnumbering the men with the same status. In fact, in the Department of Public Health, of the 12 who graduated with special mentions, 10 were women. Similarly, in the Department of Nursing, 9 out of the 14 graduates with special mentions were women; and in the Department of Optometry, 3 graduates had special mentions and all were women. When it comes to the award of medals for students who graduated with the highest cumulative GPAs from their respective departments, women excelled. The medals for the departments of Medicine, Dentistry, Public Health, Pharmacy and Optometry were all given to women; only the medals for the departments of Clinical Laboratory Sciences and Nursing were awarded to men.

Colleges are doing their duties in producing competent and competitive female health workers, but what happens after graduation? According to Sheryl Sandberg, CEO of Facebook and author of Lean In: Women, Work and the Will to Lead, “The pipeline that supplies the educated workforce is chock-full of women at the entry level, but by the time that same pipeline is filling leadership positions, it is overwhelmingly stocked with men”. In fact, according to the World Economic Forum, seven out of ten global health leaders are men, meaning that globally, there is still a long way to go to achieve equality.

Once women finish their education, they are faced with the pressure to marry and have children by a certain age. And once they have settled down, women are usually the ones that take care of the household and the children, at which point they find themselves having not one, but two full-time jobs. This often leads women to opt out of their careers — they either quit their jobs to become stay-at-home mothers, or they settle for lower job positions or part-time employment, and this hinders them from achieving high-level jobs. As for those who manage to balance their competing demands, there may be the possibility of suffering from burnout. A study conducted in the US found that women physicians are 60% more likely to experience burnout than their male counterparts. This may explain the fact that while women constitute a great deal of the healthcare workforce, there is still great disparity when it comes to high-level jobs. On the other hand, researchers Sharon Meers and Joanna Strober found that “children, parents and marriages can all flourish when both parents have full careers”.

It is perfectly fine for a woman to be a stay-at-home mother if she so wishes, but what about those who want to strike a balance between motherhood, marriage and their careers. These obligations that women face should be carefully considered by their employers and possible solutions should be put forward. For instance, policies giving women paid maternity leave – a policy upheld in Eritrea since Independence — is one of the best ways to help women keep their livelihood and their jobs while fulfilling personal milestones. There are also other factors that can help women advance in their work, in this particular case, women in the healthcare field. One of the most effective actions is to utilize associations. The National Union of Eritrean Women (NUEW), the Eritrean Medical Association (ERIMA), the Eritrean Pharmaceutical Association (ERIPA), the Eritrean Public Health Association (ERIPHA) and other similar organizations could prepare a forum for women, where they can come together, share their experiences and help tackle gender-specific problems. These meetings can also help them find mentors that guide them towards success in their career and network with other women in their fields, vital steps for career advancement.

More women reaching high-level jobs will have an impact that goes beyond their own personal achievements. Watching self-sufficient women shine in their respective fields serves as a motivator for younger generations of women to do the same. Young girls begin to identify with successful women and strive to become just like them, and in the process, they learn to take charge of their careers, to not shy away from challenges and to excel in all their endeavors, resulting in a society filled with empowered women. And where there is female empowerment, there is a prosperous society.