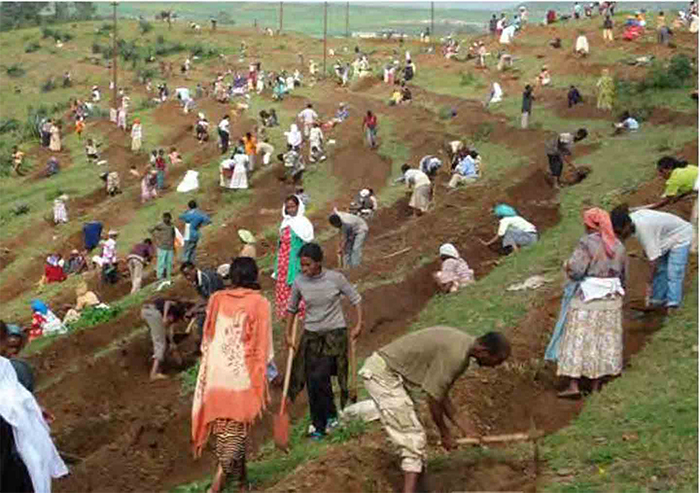 About 500 years ago, wild animals roamed the district between Asmara and Debarwa, the then capital of Midri- Bahri, Eritrea’s ancient name. Francesco Alvarez, a member of a Portuguese expedition, left his observations of the culture, the flora and fauna, and a number of other things, of what is now Eritrea, including wild animals now impossible to find in Eritrea. Less than one hundred fifty years ago, the district between Keren and Gheleb, a big town in Anseba, was rich in all kinds of trees. A Swedish man, Professor A. Kolmodin, who visited the area in November 1908, wrote:

“On Friday, November 27 we started from Mehelab. The way up to Geleb is the most beautiful stretch of the country through which one can travel. For a good part of the way, we followed the bed of the River Godmer, now dry. We moved now to the right, now to the left, and now again along the middle of the river bed, and across the river itself. The mountains kept rising, to the right and to the left. Here and there, out of the crevices of the mountains, big trees emerged. Among them was the beautiful candelabra tree. How these trees could cling to the almost sheer faces of the mountains was a source of wonder for me. Often, giant trees cast their shadows on our way.”

“… At times our path went through what appeared like a rich green park. Add to this the songs of all of the strange birds, reaching us from different directions. Imagine how it feels when even streams and rivers begin to sing. …”

A story has it that Mendefera, the capital of Southern Region, was a thick forest. Nobody dared enter it because it was full of dangerous wild animals. People took circuitous routes and avoided the shortcut through it as they visited other places and returned to their home villages.

One day, some travelers on their way home saw the flickering of some fire at the edge of the forest. They were surprised to find out that some brave-hearts dared to make their home there.

The travelers who happened to be from a neighboring village asked in Tigrigna, “Men dea defera?” (Who dared to make his home there?). Those people, who lit the first fire, the story concludes, became Mendefera’s first dwellers.

Eritrea’s forest began to diminish with the coming of the Italians. The Colonial Government invited Italian investors, or even poor Italians, to come, clear, and cultivate virgin land in different parts of the country. To this end, the Government gave out big tracts of land in Filfil, Selomuna, Agordat, and many places. It continued its policy of allocating land until Degiat Bahta Hagos’ revolt in 1895 that spelled doom to it. The revolt, however, didn’t succeed in ending Italian colonial rule, as Bahta had planned it, and was, therefore, unable to halt the progress of urbanization, which affected Eritrea’s forests significantly.

In his autobiography, Dr. Sebahtu Ghebremichael, an Eritrean scholar, narrates the commercial aspect of such destruction. He tells how an Italian man approached, convinced, and went into an agreement with his family for the latter to cut down and collect trees in the latter’s native district, near Segeneyti, for an agreed amount. Immediately, the Italian drove a truck, loaded the wood collected, and transported it to Asmara. He kept coming to Sebahtu’s family, who between his trips gathered enough wood for the Italian’s truck.

The autobiography explains that such an activity was unknown in the district before (the mid- 1940s). The arrangement provided the Italian with a secure source of income for the regularly came back for more wood. The activity kept the whole family busy and Sebahtu out of school (though not on a regular basis). However, the family earned enough only to keep body and soul together. Dr. Sebahtu doesn’t show how the villagers reacted to the destruction of their forest, and how long the Italians continued to ‘buy’ wood. In any case, the damage to the environment and the community undoubtedly was incalculable.

For centuries, Eritreans had very environment-friendly attitudes but had to balance these attitudes with their construction and energy needs. Before the introduction of corrugated iron sheets, past Eritrean generations built hidmos and huts for shelter, both of which depended on the availability of big trees.

A regular hidmo, the traditional highland house, is about 6 metres by 12.5 metres. To build such a house was no easy feat, and an Eritrean farmer can’t accomplish it on his own. A man planning to have a hidmo built, first and foremost, informed the villagers that he intended to do so on such and such a day, and invited them to help him cut down trees and transport them to the village. On this and the day of construction, the man’s family was obliged to prepare food and drink (usually suwa) for the entertainment of the villagers involved.

A man needs at least about 12 big pillars, carved out of thick trees, and about 10 long planks, similarly curved out of big trees. After the pillars are firmly installed and the planks, known in Tigrigna as gemel, comfortably laid on them, shorter cross-planks, traversing from one gemel to another, are laid. In addition, hundreds of harkems, 3 metre beams, are similarly laid from one gemel to another so that the roof is like a mesh of gemels, harkems, and branches, properly built and reinforced. All sections of the roof are prepared in the same way. This structure is further reinforced with twigs and leaves so that it can support a big amount of soil, the roof of the hidmo. In short, to build a single hidmo no less than twenty to thirty big trees and many more trees are needed. The damage to the environment can be calculated, taking the fact that an average Eritrean highland village has no less than a hundred hidmos, and that these are the most common houses in the highlands, the most densely populated part of the country.

An agudo, the typical building in rural lowland areas, requires plenty of trees though not as much as is required in making hidmo, which is bigger. The central pillar is a tall and strong wood. Other planks are made to reach the top part of the pillar from different parts of the circular wall. The making of the roof is then finalized by placing thinner and smaller pieces of wood, which should be as long as the planks, and firmly tied to the planks attached to the pillar. The construction is finalized by placing suitable grass on the roof, in such a way that no rain soaks into the floor.

Such a practice may suggest that the Eritreans were oblivious to the effect of their actions on the environment. But contrary to this, they were and still are keenly aware of the effect of the cutting down of trees, and through their customary laws tried to mitigate the damage to the environment. The following articles from the Logo Chiwa Customary Law is a good example. “Any tree intended for the purposes of a pillar or a plank should be cut down from … mid-June to the end of August. The reason is a tree cut down at this time can’t die. In fact, it sprouts again, and never dies out.” Similarly, the community forbade people from cutting down some kinds of trees because they were usually used for the construction of churches, and people were fined if they violated this injunction.

The Logo Chiwa Customary Law gives recommendations only on when trees may be cut down. It doesn’t make a reference to the replanting of trees for a tree cut down, which is what environmentalists recommend. But it is important to note here that the Customary Law was written when plants and trees, and wild animals were in abundance in the highlands. Therefore, it is highly probable that they didn’t worry much about its depletion though they were aware that the environment should be protected. They were aware that unless people cut down trees indiscriminately, nature would take its own course and replenish itself. Later, when they realized that humans could destroy nature faster than it would replenish itself, Italian colonialism was in full swing and the Eritreans had no control over their lives. In short, it was pointless to ask people to replant. Eritrea’s colonial masters now owned the land, and their subjects were deprived of their land. Eritreans no longer owned the land.

Despite such oppression, however, the Eritreans’ understanding of the role of the environment and the fact that people are responsible to protect it persisted through the years. Eritrean villages continued to elect one of their members, a zeraai, an environmental warden, who made sure their crops were protected, no green trees were cut down, and environmental resources were equitably used by villagers. After independence, an official government office has assumed the responsibility. In other words, environment-friendly attitudes have crystallized into official law. The environment has assumed so much importance that it is now protected by state law.