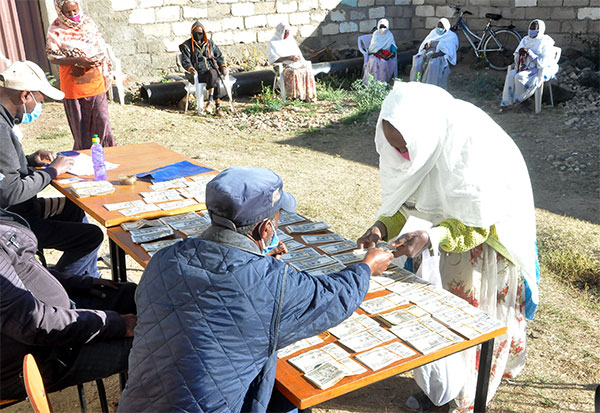 Several days ago, the Ministry of Labor and Social Welfare (MLSW) branch in Laelay Gash sub-zone reported that financial and material support had been extended to disadvantaged citizens in the sub-zone. In particular, eight families in Awdaro, Boko, Debero, and Meflech administrative areas each received support in the form of livestock and materials worth about 10,000 Nakfa. The MLSW report also went on to explain that in Gerenfit administrative area an additional 96,600 Nakfa, which was contributed by nationals, was extended to disadvantaged citizens, while several families received livestock worth over 50,000 Nakfa.

Not only was the MLSW’s recent report positive, it was deeply heartwarming. It is always nice to see people coming together, showing generosity, and demonstrating solidarity for one another. When we see examples of generosity and solidarity in action it can only help to restore and reinforce our faith in the goodness of humanity. As well, the recent extension of support is very significant and extremely timely. This is particularly important since a number of individuals and households in the country have been confronted with some considerable challenges in recent months due to the COVID-19 pandemic. Beyond these direct observations, the recent report of contributions in Laelay Gash sub-zone also offers a useful opportunity to take a brief look at the general topics of giving, generosity, and support.

A large body of work exploring various contexts and different settings around the world has shown that people give to others, show generosity, and extend support for a variety of reasons. For instance, some people are motivated to give because they strongly identify with a specific cause that they feel passionate about, while other individuals may be motivated to give as a result of experiencing significant or life-changing events (e.g., undergoing a hardship or suffering a loss of a loved one due to a disease). Still others may be influenced to give because of the fact that people within their social circles are doing it (for instance, when friends or relatives give, we often feel encouraged to do so as well), while morality, faith, and religion are all strong drivers of why people give. Regarding the latter, for many, helping others and giving support is a moral obligation, while giving and offering charity is a fundamental part of many spiritual and religious belief systems.

According to analysts and researchers, many people may be drawn to give by the multiple benefits that they may receive in return. These benefits include the fact that giving can: improve health and increase longevity; make people feel better about themselves and increase happiness or self-satisfaction; enhance social networks; stimulate empathy and the ability to understand or share the feelings of others; and increase the likelihood that others will give to them in return. Interestingly, a lot of empirical work also shows that there are some individuals who may be driven to give by guilt over privilege, egoism, beliefs in superiority, or a desire to gain attention (for example, in order to “show off” to others about just how rich they are).

As a final point, it is worth noting that not only are the reasons that drive people to give and extend support to others extremely diverse, individuals who give and offer support can be driven by more than one single reason.

In Eritrea, generosity, giving, and extending support to others are very common and they are deeply rooted in society. One prominent factor is faith and religion. Eritrea is a highly religious country and the nation’s major faiths, particularly Christianity and Islam, call upon their followers to be generous and give help to the less fortunate. (The Christian tradition has considered giving a key religious practice, while for Muslims, giving [“Zakat”] is one of the five pillars of Islam.)

Furthermore, the country’s various ethno-linguistic groups place social value and deep significance upon the group and community. The latter are regarded as the basic units and fundamental building blocks of society. From early on, children learn that while communities and groups consist of individuals, there can be no individuals without the broader support, backing, and platform of groups and communities. Additionally, there are an array of social traditions and popular proverbs in Eritrea attesting to the great value and significance society places upon generosity, sharing, giving, and supporting others.

Moreover, every single day, in small villages and communities up and down the country, individuals and groups readily demonstrate their generosity and selflessness. Just last year, representatives of the United Nations Development Program in Eritrea explained how the strong sense and value of community in the country, coupled with generosity and solidarity, played an important role in the fight against the spread of COVID-19.

There are numerous other examples. When they come together to support one another in the grieving and mourning of someone who has passed away, Eritreans offer not only sympathy and condolences, but also food, financial support, and other resources to families who have lost a loved one. Similarly, during the celebration of a marriage, graduation, birth, or baptism, neighbors, colleagues, and coworkers offer financial support or give their time and energy to cook food, arrange tents, and prepare areas for celebrations. In urban areas, young people regularly go shopping and deliver groceries for the sick, elderly, or otherwise physically immobile, while in agricultural areas people work cooperatively to meet the needs of everyone in the community: collectively working the fields, planting seeds, and harvesting crops. Neighbors and community members also devote their time and resources to construct homes or develop community projects.

Along with the motivations outlined above, another one of the key drivers of generosity, giving, and support in Eritrea is the strong sense of duty and obligation. On one level, as humans and neighbors, many regard it as a basic duty and obligation to support one another and help the less fortunate: it is only right and appropriate. However, the sense of duty and obligation also applies to and is particularly evident in the support extended to veterans, contributions to families of those who have fallen, and contributions to the country from nationals living abroad. Over the years, many Eritreans shed blood and gave life or limb, making great sacrifices in order to bring independence and defend the sovereignty of the nation. Thus, it is a special duty and obligation to demonstrate our appreciation, preserve their legacy, and support them or their families in any way.