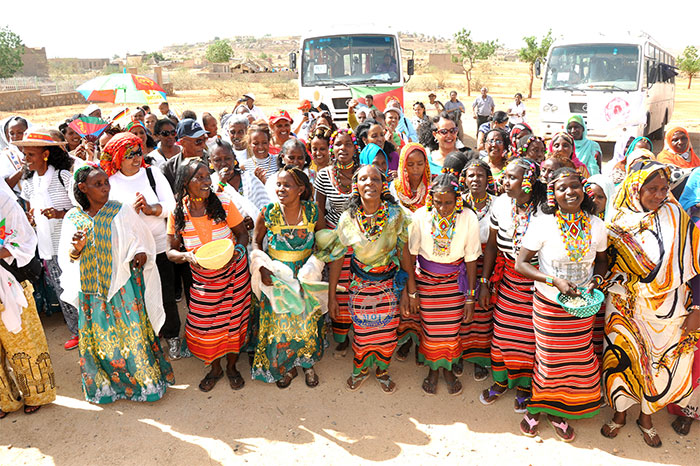 Despite international conventions and national laws prohibiting harmful traditional practices, Female Genital Mutilation (FGM) and child marriage continue today throughout the world. These harmful traditional practices are carried out mainly because of negative attitudes about girls and women and have devastating and long lasting health, psychological and emotional consequences. They ruin women’s body, mind and spirit.

The first step taken by the EPLF was to raise the consciousness of the society. As a result, for the first time in Eritrea’s history harmful traditional practices were questioned and outlawed, social barriers that limited women to realize their full potential were removed and women’s voice was raised. In 1979, representatives of Eritrean women from all walks of life gathered in Arag, a liberated area at the time, and had a founding congress of the National Union of Eritrean Women (NUEW) under these slogans: “Emancipation through equal participation in the struggle” and “A revolution cannot triumph without the conscious participation of women”. 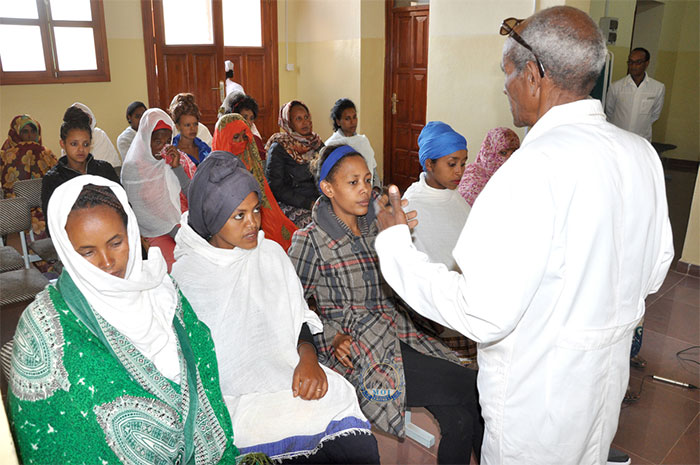 Following Eritrea’s independence, the Government issued legislations that criminalized the conduct of harmful traditional practices, and conducted campaigns to raise people’s awareness of the harmful practice. Efforts were made to create an environment, where women and girls can comfortably and safely live, play, work and learn. The elimination of the harmful traditional practices is seen as vital for women’s physical and emotional safety. Coordinated efforts are made to expand the space where Eritrean women feel comfortable and enjoy the freedom to express themselves without the fear of judgment or harm.

Female circumcision is performed on infants that are a few days or months old. The reasons for the practice are many, including, but not limited to, psychosexual. Reducing or eliminating the sensitive tissue of the outer genitalia, particularly the clitoris, is widely believed to weaken the sexual desire in girls. Therefore, by lowering their sexual desire, the society felt it could increase the probability for girls to maintain their virginity, which is highly valued by the society, before marriage.

Eritrea has made great progress in ending harmful practices against women and girls. In an interview this week, head of the NUEW’s Socio-economic Department, Ms. Senait Mehari, said the women’s union has made strong efforts to eliminate harmful traditional practices. At independence 95% of Eritrean women underwent female circumcision. But the number went down drastically according to a study conducted in 2010. For girls aged 6-15 years, 33%, and for girls under 5 years, 12% underwent female circumcision. Although the result is encouraging a lot remains to be done to bring the number to zero.

Child marriage is another harmful traditional practice which deprives women of their right to health, education, and safety. It increases the risk of complications during pregnancy and childbirth due to the physical immaturity of the girls. Globally, many such young girls die during pregnancy and childbirth. To discourage the practice, child marriage has been criminalized in Eritrea and campaigns have been carried out.

A number of the international human rights instruments address child marriage and other harmful traditional practices. The ‘Convention on the Elimination of All Forms of Discrimination against Women’ states that “betrothal and the marriage of a child shall have no legal effect, and all necessary action, including legislation, shall be taken to specify a minimum age for marriage and to make the registration of marriages in an official registry compulsory.” The ‘Convention on the Right of the Child’ considers any marriage of a girl younger than 18 years old a child marriage. In the same vein, the Civil Code of Eritrea states that “a man and a woman who have not both attained the full age of eighteen years may not contract marriage.” 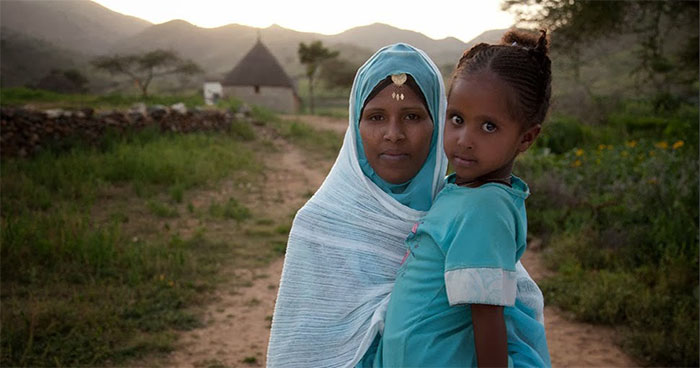 Globally, girls who are not enrolled at school are at high risk of being married early. If girls can stay in school and complete their education, they are less likely to marry at a young age. The expansion of education in Eritrea has definitely contributed towards reducing underage marriage of girls, and the social transformation in the country has helped women to raise their status. The Government is working to protect and promote human rights of women by fighting against FGM, child marriage and other harmful practices.

Harmful traditional practices have a high cost to national security and prosperity. Any physical and psychological damage done to girls creates additional burden to the national healthcare and social welfare services. It is true that the harmful traditional practices are deeply rooted in the culture of the society, but their elimination cannot be left to the whims of the society. Their elimination can only be guaranteed through a careful enforcement of a legislation and on-going awareness raising campaigns.