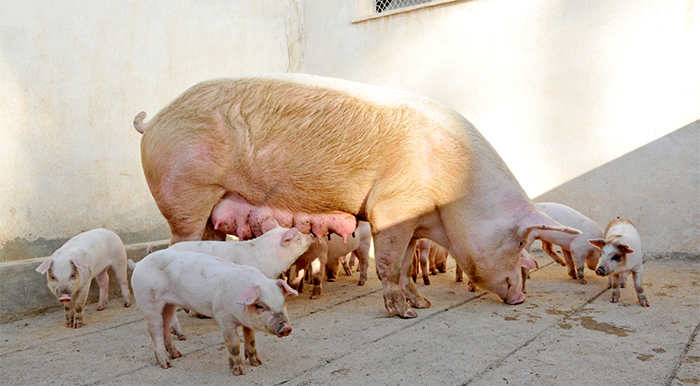 The Ministry of Agriculture (MoA) is engaged in promoting swine and rabbit production in its breeding centre located in Paradizo, Asmara. The initiative aims to increase the production and diversity of meat sources in the country. 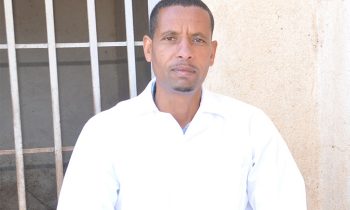 According to Mr. Hienok Ghebrehiwet, General Manager of Horse, Swine, and Rabbit Breeding Centres, the MoA began the process to improve breeds of rabbits and swine in 2012 by undertaking necessary technical and infrastructural preparations. In 2015, some pure breeds of swine (large white and droc varieties) and rabbits (New Zealand white and Californian varieties) were imported through cooperation with the International Fund for Agricultural Development (IFAD). This not only helped to improve the existing swine breeds in the country but also introduced rabbit production at the household and semi-commercial level.

In Eritrea, swine and rabbit production was first introduced during the Italian colonization period, mainly within Asmara and Elabered. Although swine production has continued since then, the productivity of the breeds has declined over time due to inbreeding. As a result, the MoA began importing swine in order to help improve local breeds.

Currently, eight commercial swine production farms and numerous households in the country are beneficiaries of support from the Swine Breeding Centre. As well, more than 500 piglets have been distributed to commercial piggeries in various parts of the country. Regarding rabbit breeding and production, a total of 180 farmers and households have become beneficiaries. 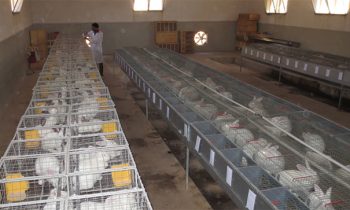 When discussing the importance of promoting swine and rabbit production, Mr. Hienok noted that globally the major sources of meat for humans are increasingly poultry, swine, and rabbit. Currently, Cattle, sheep and goats, due to their low prolificacy rate, can’t meet the increasing global demands for meat. Accordingly, Eritrea’s introduction of these meat-production initiatives and support to small and medium-sized commercial farmers is timely.

The Rabbit and Swine Breeding Centre, which covers over 2 hectares, is run by animal science, agronomy as well as veterinary experts, managers, and sanitation and green feed production workers. 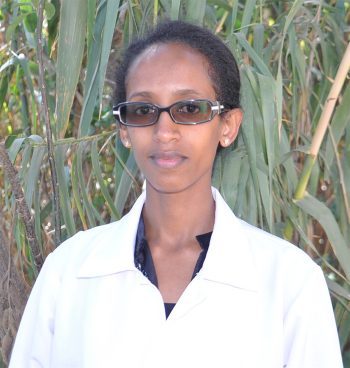 Question (Q): Can you tell us a bit about the swine breeding section?

Answer (A): The swine breeding section is part of the larger Rabbit and Swine Breeding Centre located in Paradizo, Asmara. To date, the Centre has kept a number of pure breeds of adult male and female pigs, as well as a number of piglets. The Centre was established to be able to appropriately house pigs and piglets. There are a total of 9 rooms, out of which 4 are farrowing rooms. The other rooms are for pregnant sows, gilts, and boars. Moreover, there is about 1.5 hectares of foraging land which is shared with the rabbit breeding section.

Q: How is their productivity?

A: Generally, swine are farm animals that are very prolific. The average litter size per delivery is around 12 and they give birth about twice per year. In this Centre, even though the average delivery at a time is about 12, there were times that some of our sows farrowed up to 21 piglets! The first generations of the pigs gave birth for 9 rounds and were replaced with their offsprings which have so far delivered for 3 rounds. We closely observe and record everything during mating, furrowing, weaning, and sales.

Q: How and what do you feed the swine?

A: We feed them both concentrated and green feed. These are produced within the Centre. Generally, they are fed according to their body size, age, sex, and physiological state.

Q: What are the advantages of swine production when compared with sheep and goats?

A: Generally, sheep/goats give birth to 2 offspring annually. However, a pig can give birth to more than 24 offspring per year in just 2 deliveries. In addition, swine meat possesses adequate protein, vitamins, and minerals. Moreover, a pig has a very high feed conversion capacity in that it can gain a kilogram of meat from 3 kilograms of feed. This important comparative advantage has made swine production one of the top 3 sources of meat globally. In fact, some sources estimate that about 50% of the meat consumed throughout the world comes from swine.

Q: Who are the main beneficiaries of the Centre?

A: When piglets are about 2 months of age they may be sold to customers. So far, a number of livestock farmers and individuals in the regions of Maekel, Anseba, and Debub, have benefited from pure breeds of swine from the Centre. Though the production of swine in the country is relatively low, the customers who received breeds from the Centre report that they have improved their breeds in terms of productivity and offspring.

A: I would just like to remind everyone that the Centre is ready to provide an adequate number of piglets for potential swine producers. If farmers or others wish to upgrade their breeds, they can take the large whites, while for the male swine, the most efficient is the droc breeds. After cross-breeding, the piglets grow very fast. Finally, I wish to announce that the Centre can provide the necessary information and technical support to farmers and swine producers in the country.

Mr. Kokob Haile is an animal science expert who began working in the Centre in 2012. Since 2015, he has been in charge of the Rabbit Breeding Section (RBS). He provided us with an overview of the section. 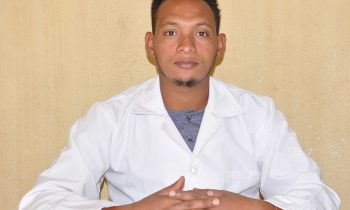 Question (Q): Can you provide a general description of the rabbit breeding section?

Answer (A): The Rabbit breeding house is situated within an area of 168 square meters and has around 400 cages for rabbits. The cages are of two types: the first 96 cages are designed for dows, while the remaining cages are meant for bucks, weaning, and fattening litters.

Q: What are some of the activities of the RBS?

A: There are a lot: routine inspections, caring, feeding, cleaning, sales, and other management practices. We also offer advisory services.

Q: What types of rabbit breeds does the RBS possess?

Q: When did the RBS start to reproduce the rabbits?

A: A rabbit reaches maturity at the age of 4 months. The rabbits in the Centre started reproducing in May 2015. So far, we have produced more than 5000 rabbits, with 1000 distributed to 180 beneficiaries for breeding. The remaining were sold for meat. 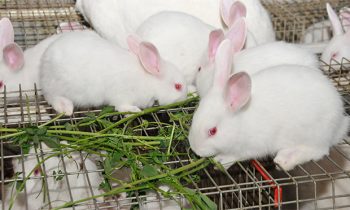 Q: What can you tell us about rabbits?

A: Rabbits are very docile animals that can be reared by anyone at any age. The size of a mature rabbit is about 3-5 kg. Females reach their mating stage at the age of 4 months and are very prolific. They remain productive for about 2 years from the time they began mating. They can give birth about 4-6 times per year.

Q: What kind of feeding systems does the section use?

Water is available for 24 hours at this section and is designed in such a way that it is easily accessible to the rabbits.

Q: What has been the response or perception of beneficiaries towards rabbit production?

A: Even though it is improving, public awareness about rabbits is still low. For this reason, the Centre conducted some awareness-raising activities, including distributing informational materials and conducting interviews with various media outlets.

Q: What are the benefits of rabbit production?

A: A rabbit has many advantages. They are very prolific and their gestation period is very short – about only a month, and they give birth to about 8-12 offspring at a time. Rabbit meat is also lean and cholesterol-free, with high protein and energy content.

Additionally, they are docile and easy to manage. The cost of managing and raising them is relatively low: you can feed them household leftovers and housing them is quite simple. 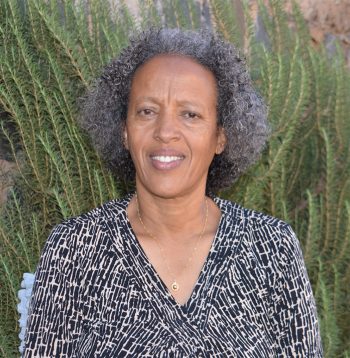 Ms. Genet Bokretsion is a well-known farmer in the country, who has been active in various areas, including poultry and other livestock production. Recently, she developed an organic liquid herbal pesticide. A few years ago, alongside five other members of the Eritrean Women in Agri-business Association (EWAA), she began rabbit production. However, the venture had several challenges which meant it was not as successful as initially hoped. However, last year, amidst the COVID-19 pandemic, Ms. Genet received 4 rabbits from the Ministry’s Swine and Rabbit Breeding Centre in the hopes of reinvigorated her rabbit production initiative.

During the first weeks of the national COVID-19 lockdown, she bought 2 female and 2 male rabbits. She fed them alfalfa, which is cultivated at her farm. Currently, she has over 30 rabbits. 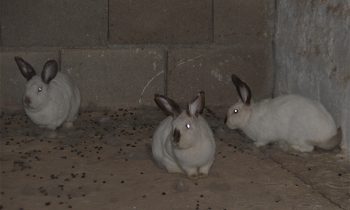 According to Ms. Genet, the rabbits are fed with 65 percent green feed and 35 percent concentrates and legumes. Discussing some of the advantages of rabbit production, she explained how they are prolific, calm and easy to manage. Additionally, their waste products can be used for organic fertilizer, while their skins can be used to produce leather. Ms. Genet also explained that rabbits have been a healthy source of meat for her family. Some challenges that remain, however, are that rabbits and their various benefits are still not widely known in the country.