Avoiding the Doctor: church mass a day keeps the psychiatrist away….Sort of! 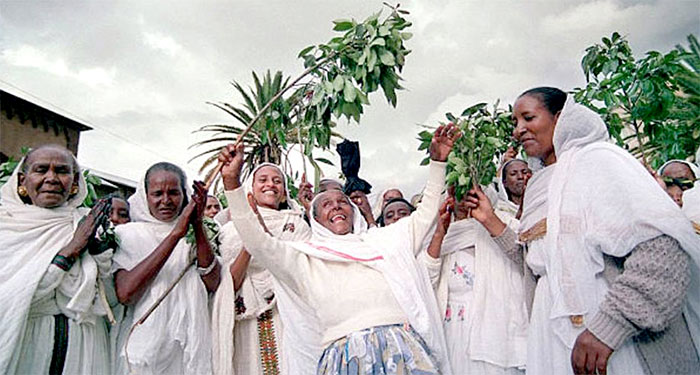 Eritreans do not keep the doctor away by eating apples a day like in old time Europe. We can’t afford to eat an apple a day. Perhaps we can do it with beles (prickly pear), but that’s during summer only. By the way, do you know that beles is good for the kidneys. It cleanses the urinary ducts. That’s good news for those who suffer from blocked bladder.

But we have many other ways to keep the doctor not only away but far enough to make him close his private clinic and enroll Military Medic Services.

People like Addey Tekea are in this world just for that.

Addey Tekea is a widow who seems to lead a life of quiet desperation. In her tiny and darkened hole, she gives one the impression that she is an endangered species. Perhaps a vanishing breed.

Her husband, who led a life of genteel poverty never accepted defeat and died a proud man at the age of sixty five. Addey Tekea never forgave him for leaving her in the lurch.

As far as I know, Addey Tekea has never been to a doctor. She is her own doctor. Sort of.

“Why doctor when St. Mary is around,” she wonders.

That’s why she goes to church every day at dawn. When people sit up in their beds brooding about having to face their bosses and handling their unfinished jobs the next day, Addey Tekea commutes with God and his angels whom she believes are capable of putting her heart to rest and vanish every trace of worry and stress from her soul every time she enters the church. Using mekomia (a staff or cane for leaning on during the long and sometimes boring liturgy) and listening to the Yared chants (the Orthodox Church’s Gregorian Chant) she gets in a trance and unites with the Universe. Zen buffs eat your heart out where ever you are!

It is, as it were, a church Mass a day that keeps the psychiatrist away. Blood pressure and stomach ulcer are unknown to Addey Tekea. After all, what you don’t know won’t hurt you.

Once, Solomon, Addey Tekea’s only son, took her to a doctor in spite of herself. When they returned home, the son told his mother that she had hypertension and that she should stop drinking coffee.

“Nobody is going to stop me from enjoying my coffee!”

“But the doctor says you have blood pressure.”

“Tell him to mind his own business.”

You can call it mind-over-matter or faith or blissful ignorance, whatever you like, but in spite of her high blood pressure, Addey Tekea is still brewing her black coffee after mass. The worst that can happen to her is sudden death and she is ready for it. She seems very sure about getting to heaven.

Only once did Addey Tekea mention pills and tablets. She couldn’t stop the pain in her stomach.

“The red ones with yellow stripes are good,” she sighed. “They have cured my friend Zewdi with similar stomach complaint in the past.”

After taking pills, she stops taking more. Once cured, stop the treatment, she likes to say.

In Eritrean medical tradition there is no cure ‘safer’ and more ‘effective’ than Mahgoma (bleeding the patient to get rid of ‘sick and tainted blood’).

In Eritrea the procedure is simple: bring a horn, open on both ends, make a slit on the patient’s affected body part and suck with all your might.

As every blood that come out from the body coagulates in contact with air and turns brownish red as a result, the ‘bleeder’ thinks that the blackish blood was the cause of the suffering of the patient.

“Thanks God, Creator of the world, I have been spared,” sighs the patient.

Whenever Addey Tekea is suffering from minor ailments (mostly psychosomatic) the neighborhood women gather in her house and brew coffer for her and for themselves. No psychiatric couch. No hypnotism to find the cause of the suffering. Just chatting at full throttle and off with the blues.

All kinds of disease are downplayed during the non-stop discussions.

“But my son told me the doctor said I have gastritis; I can’t eat berbere.”

“Don’t pamper your stomach. Give it what it most dislikes. It will learn the hard way.”

But, sometimes one comes across very strange remedies.

Let us see how Addey Tekea treats her merzen (Migraine). Very simple: tie a red ribbon around the head or puck up a dead chameleon by its tail and swing it around the head. What is the explanation? Don’t explain things. Only the devil asks for explanations.

When the ancient were young and walking bare foot, they used to urinate on a fresh wound caused by butting the toe against a stone. They thought that fresh urine was a sure remedy against infection. So much so that they always saved some of their pee in their bladder for a rainy day.

“Would you please urinate on my fresh wound as I have finished mine?”

“I am sorry, but I may need my urine for myself in case I trip and hurt my big toe.”

For Addey Tekea the heart occupies the whole chest cavity and way down below. Some stomach cramps or heartburns are wrongly identified as heart conditions.

“My heart has slipped away. My heart is turning inside my chest. My heart is exploding or imploding inside me…..” The cure is cold milk or, nowadays, a glass of Coke. And it works all the time. Probably it was a case of acute indigestion.

Some of the words of wisdom of Addey Tekea: If a piece of bread falls, flip it off the ground, kiss it and bring it to your forehead three times and eat it.

“What about the germs?”

“They have been blessed and won’t cause any harm anymore.”

Sudden stomach crump? Bend over and touch the ground three times with your right hand. The pain will go away.

Red Shot eyes? Shove a very thin twig up your nostrils toward the eyeballs. The blood that caused your eyes to get red will flow down your nose. Now be a good boy and go and play outside.

A mixer of art and science