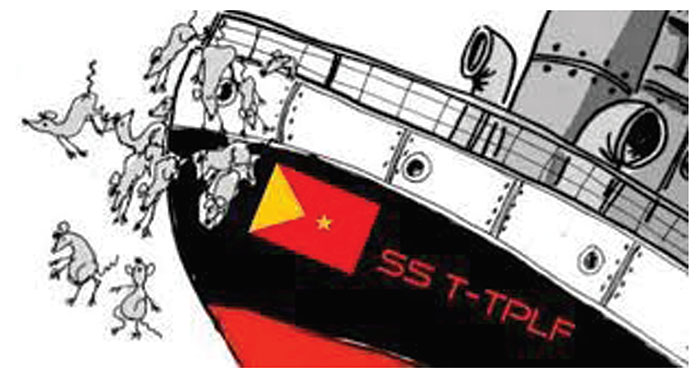 Since the launch of TPLF’s suicidal misadventure five months ago, citizens of the Horn of Africa region are observing with incredulity two intertwined reactions from some personalities, states, organizations and the corporate media. The first and much pronounced aspect is the attempt to create an alternate reality of the conflict. This goes in parallel with the publicly displayed melodramatic stages of grief that these entities are going through.

TPLF lobbyists in the garb of think tanks, NGOs, members of governmental and international organization bureaucracies have been working frantically to create an Orwellian reality using all the tools at their disposal. They want the world to believe that the junta who launched coordinated military attacks on 200 positions of the Ethiopia’s Northern Command and neighboring regions, indiscriminately fired missiles on cities in Ethiopia and neighboring Eritrea; to be seen as an innocent victim! The junta that committed well-documented massacres and unspeakable atrocities including in Mai Kadra, and on Eritreans interned in camps in Tigray; is portrayed as reliable informant on fictitious atrocities. They are resorting to punishing the forces that contained and defeated TPLF’s misadventures; while scrapping the barrel to resuscitate the criminal junta shunned by peoples of the Horn.

Simultaneously, they are going through the stages of grief over the defeat of TPLF. It started with denial. When TPLF was decimated in the battle field and went on the run; they held on to the belief that it was junta’s well-calculated move.

This was followed by anger. Once the TPLF leaders with whom they wined and dined, and who signed their checks or to whom they gave blank checks were caught and killed in battle; they went into a rage and blamed everyone but those who started the military confrontation. In the midst of their anger they resorted to scapegoating a neighboring country, Eritrea, for the disasters created by TPLF.

Five months down the road, they are yet to exhibit any semblance of accepting the demise of TPLF and having closure. It might not be easy to give up on their hopes and write off the huge financial, diplomatic, military and public relations support and investment they lavished on TPLF for three decades; or abandon their vision of the Horn with TPLF playing a major role; or discard their expectation for countries of the Horn to triangulate their regional interactions through the EU or US as third parties; or throw away their ploy of having Eritrea contained and excluded from the regional sphere.

Their vision for the region diametrically contrasts with the wishes of the peoples and Governments of the Horn of Africa. The way forward is for all the States to engage on equal terms for mutual benefits, consolidate the peace and create complementarity that benefits their citizens, engaging with countries near and far as equal partners.

In a military confrontation that it started, TPLF has crumbled into tiny pieces and got swept by the wind; with zero possibility of the pieces coming together again. The sooner the external actors accept this irrefutable reality, the better chance they have to salvage any opportunity of engaging the countries of the region in shaping a peaceful and prosperous Horn of Africa.

The personalities, states, organizations, and the corporate media who are laboring to create an alternate reality are invited to have closure, accept TPLF’s demise, cross the Rubicon, be a force for good in the Horn. The lobbyists will join you once the checks dry up.

Avoiding the Doctor: church mass a day keeps the psychiatrist away….Sort of!

Desert Locust Situation During March 2021 And Forecast for April 2021