A Witness of Massacres in Mai Kadra 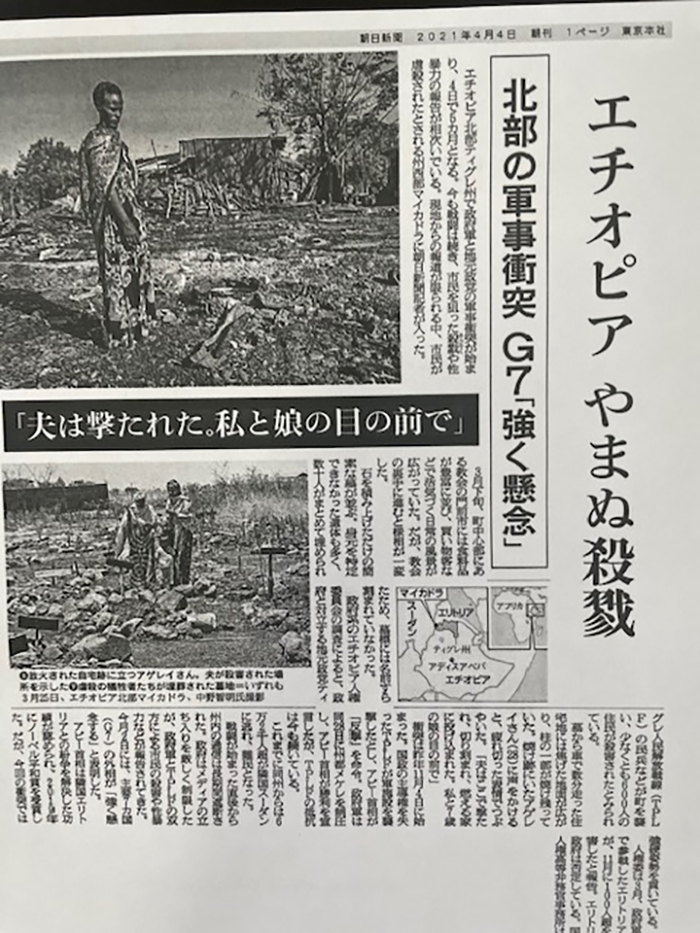 Asahi journalist visited Mia Kadra and interviewed a survivor of the massacre.

Ms. Agerey (28) told the journalist and showed the place of their burnt house found at the Mai Kadra town. She said:

The conflict started on 4 November 2020. PM Abiy ordered a “counter-attack’’ saying that TPLF, which lost its power in the national government, attacked government military facilities in the north. Government military forces subsequently took control over Mekele and declared their win but TPLF’s resistance continues.

More than 28,000 fled from this area and took refuge in Sudan.

Telecommunications in this area was shut down when the battle started and the national government strictly controlled media access but it is reported that killings and sexual violence were committed by both TPLF and Government sides. On April 2nd, Foreign Ministers of G7 expressed strong concern.

Abiy won Novel Peace Prize but he holds strong position on this conflict. Human rights committee reported that Eritrean army on Ethiopian Government side killed more than 100 in November. Eritrean Government denied it. UNHCR plans to do research about human rights abuse in the province.

The incident happened on November 9, just before Government forces went into the town.  According to Government Human Rights Committee, the Militia and Youth Groups (who perpetrated the crime) were mainly from Tigray. More than 600 people that were killed by them were mainly from Amhara.

“Armed with knives and machetes, they suddenly appeared in front of our house.  A group with guns also came. My family tried to run away from back yard but my husband was shot and died immediately. The group attacked the fallen husband with knives and threw his body into the burning house, which they lit with fire. The group visited one by one the houses and checked people’s language and IDs to find out Amhara and killed the Amhara”.

On November 10, when Government forces arrived in the town, the killings were already finished and the Tigray forces had run away from the town. The Mayor of the town says they killed many people as they left the town. According to AFP, TPLF denied committing the killings.