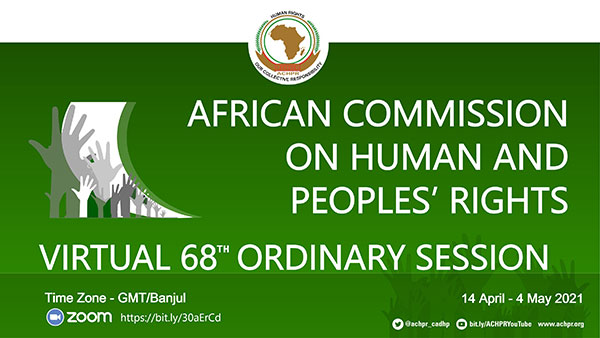 Statement by the Delegation of the State of Eritrea at the 68th Ordinary Session of the African Commission on Human and Peoples’ Rights (ACHPR) On agenda item 3, “Human Rights Situation in Africa”

It gives me great pleasure to address the 68th ordinary session of the ACHPR on behalf of the Government of the State of Eritrea.

At the outset, I wish to convey my Government’s condolences on the passing of a member of the ACHPR, Commissioner Ndiamé Gaye.

The AU Assembly designated ‘Arts, Culture and Heritage: Levers for Building Africa We Want’ as the theme for 2021. The theme has direct relevance to Africa’s renaissance, to the implementation of the African Charter on Human and Peoples’ Rights, and the Commission’s work.

The lofty ideals of human rights, development, democracy… are oftentimes framed as concepts that we copy from outside and transplant in our continent; sidelining Africa’s millennia-old culture and rich and diverse heritage. The theme brings to the fore the necessity of preserving our rich cultural heritage, using them as inspiration for our developmental visions, and situating our plans in Africa’s reality predicated on the national context, priorities, and human betterment ideals.

The theme resonates with the importance Eritrea gives to cultural heritage in the nation-building process. Eritrea’s National Charter adopted in 1994 outlines the vision of “[d]rawing on our rich cultural heritage and on the progressive values we developed during the liberation struggle, to develop an Eritrean culture characterized by a love of country, respect for humanity, solidarity between men and women, love of truth and justice, respect for the law, hard work, self-confidence, self-reliance, open-mindedness, and inventiveness.”

The COVID-19 pandemic continues to inflict considerable harmful impact globally. In Eritrea, thanks to the pragmatic approach and protective measures deployed, the degree of the transmission of the virus has been low. As of 22 April 2021, there were 3597 confirmed positive cases, out of which 3406 (94.7%) have recovered, with 10 fatalities. These figures, even though encouraging do not warrant putting our guard down. The Government and People of Eritrea are redoubling their efforts to contain the pandemic and minimize its adverse socio-economic impacts, including through providing assistance to vulnerable sections of the society.

Based on a careful assessment of the situation in the country, the lockdown measures are gradually being reversed in phases. Schools at all levels have reopened as of the beginning of this month. Similarly, public transportation services have restarted, and international flights have partially resumed. The resumption of the services is being undertaken with strict adherence to COVID-19 protective procedures.

The detrimental effect of the pandemic on the pace of progress in achieving developmental goals, and the economic impact of the protective measures notwithstanding, the people and Government of Eritrea are dedicating their time, energy, and resources to laying down the foundation for economic development and improving the standard of lives of the population by focusing on key productive sectors in accordance to the new national development road-map.

Unfortunately, the pandemic is not the only emergency that the Horn of Africa region has grappled with recently. Despite the emerging and promising progress that resulted from the Eritrea – Ethiopia Peace, Friendship and Cooperation Declaration and Agreement signed in July and September 2018, respectively, and with the promising implications to regional peace, security and development, a new crisis emerged in the Tigray region of Ethiopia. The crisis emerged during the harvest season in a humanitarian situation where a significant portion of the population depended on humanitarian assistance under the Global Safety Net and has become an urgent priority.

The fundamental issue is that the crisis erupted by the TPLF clique’s attack in early November 2020, on Ethiopia’s largest army contingent, the Northern Command stationed in the Tigray region. This was followed by missile attacks on a neighboring region in Ethiopia and several targets in Eritrea. The reckless attack, with the ill-intent to seize power in Ethiopia and eventually invade Eritrea constituted a threat to the national security of both countries with grave consequences to the emerging and promising progress in the revitalization of peace, security, and development in the Horn of Africa Region. It is to be noted that this clique, with the support of certain powers, has served as the main agent for the destabilization of the Horn of Africa region, while in power for 27 years since 1991.

Once the evil plan started to fail immediately, the TPLF resorted to an intensive propaganda campaign of defaming Eritrea. Disinformation through the cyber domain has remained the only weapon of the TPLF clique and pursued through desperate fabrications and recycling of fake news and photo-shopped images of events that never occurred. Certain media outlets, some of them hired by the TPLF clique, since its time as the ruling power in Ethiopia, continue to be involved in the propagation of the fake news, Eritrea being taken as a scapegoat and main target.

In this regard, the baseless allegations made against the Eritrean armed forces are alien and an affront to the history and culture of Eritrea, a country with a strong legal and institutional basis for respect and protection of human dignity in any situation. Eritrea’s strong advocacy and practice for adherence to international human rights law and international humanitarian law during armed conflicts including during the 30-years national liberation struggle is well known.

The allegations leveled by the TPLF clique and Eritrea’s arch-enemies highlighting the defamatory portrayal of sexual violence, looting, and crimes by the Eritrean army in the pretext of Ethiopia’s rule of law operations in the Tigray region of Ethiopia are thus baseless. These allegations are meant to deflect attention from the war launched and atrocities committed by the defunct TPLF. It is unacceptable that the same external entities who aided and abetted TPLF’s murderous reign in Ethiopia for almost three decades by providing financial, political, diplomatic, and military support, are now working desperately to cover up its crimes, give it a lifeline and use Eritrea as a scapegoat in the situation.

Ethiopia has been affected by the conflict launched by the TPLF clique and the humanitarian problems the attack engendered. The crimes of aggression, ethnic cleansing, war crimes committed by the TPLF are not limited to the past few months but span three decades, and go beyond Ethiopia to neighboring countries, including Eritrea. The impact of the TPLF’s clique war of aggression on Eritrea in the pretext of the border war and the protracted existential threats for almost two decades is a recent memory. No amount of deflection and propaganda can absolve the clique of the crimes it continues to commit.

In conclusion, it is essential to remind, that any attempt to deflect attention from the high crimes perpetrated by the TPLF clique and downplaying its culpability will not, indeed, serve the cause of peace and security, and human rights and development. This will also entail a historic betrayal of the ongoing effort of genuine peace, security, and development in the Horn of Africa. Furthermore, it is an outright denial of the unparalleled damage the TPLF clique made during its 27 years as a spoiler in the region. Any party motivated by human rights concerns and peace, security, and development in the Horn of Africa, shoulders the responsibility to condemn the TPLF clique’s crimes and hold the perpetrators accountable.