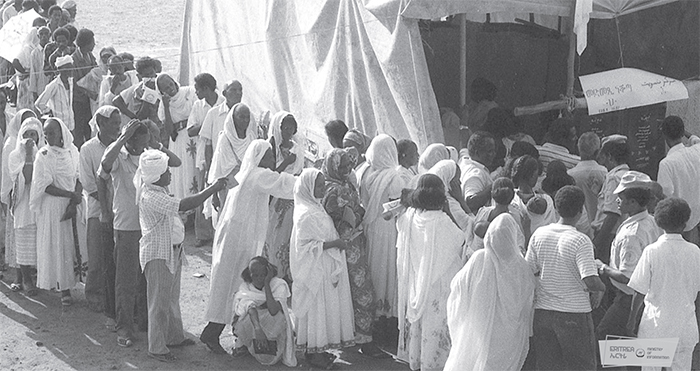 Exactly 28 years ago this week, the Eritrean referendum for independence was conducted. It was the culmination of a bloody, bitter struggle. The three-day, internationally sponsored and observed plebiscite took place during 23-25 April 1993, offering Eritreans residing in Eritrea, Ethiopia, Sudan, and in over 40 other countries including Canada, the US, across Europe, and parts of the Middle East, the opportunity to finally – and resoundingly – determine their future and exercise the rights that they had been denied for decades. Undeniably, that week was one of the proudest, most emotional moments in Eritrea’s long, eventful history.

On 16 December 1992, the UN General Assembly (UNGA), which had ignored the illegal, forcible and unjust annexation of Eritrea by Ethiopia in 1962 and then spent several decades overlooking Eritrea’s legitimate claims to freedom and independence, passed resolution 47/114 by consensus.

The resolution authorized the establishment of the United Nations Observer Mission to Verify the Referendum in Eritrea (UNOVER). In the resolution, the UNGA took into account that Eritrean authorities directly requested the involvement of the UN in verifying the referendum and expressed their commitment to respect its results.

Though Eritreans’ deep desire for freedom was clear and hardly ever in doubt, the victorious EPLF refrained from declaring outright independence in May 1991, when it had ultimately defeated Colonel Mengistu Hailemariam and the Derg. This was because it was keen to demonstrate the Eritrean people’s strong preference for independence, and it was fully aware that sovereignty, legitimacy, and membership in the international community were “predicated on a democratic and legal conclusion to the conflict.” In fact, for many years beforehand, the EPLF’s proposals that the UN conduct a referendum for the Eritrean people to decide upon whether to be independent had been rebuffed. In any event, quickly after the EPLF triumphantly rolled into Asmara in 1991, winning de facto independence and welcomed by ecstatic crowds, it began preparations to allow the Eritrean people to determine their political future through an internationally supervised referendum.

On 29 May 1991, the secretary-general of the EPLF and Head of the Provisional Government of Eritrea, Mr.Isaias Afwerki called upon the UN to “shoulder its moral responsibilities [to help conduct a free and fair referendum on Eritrean self-determination] without further delay.” In May 1992, Eritrea’s Referendum Commissioner invited the UN Secretary-General to send a UN delegation to observe and to verify the freedom, fairness, and impartiality of the entire referendum process which was to begin in July 1992 and end in April 1993. Following several fact-finding missions, consultations, and technical reports conducted by UN teams throughout 1992, the UNGA passed resolution 47/114 to establish UNOVER.

UNOVER was deployed to Eritrea in January 1993, opening headquarters in Asmara, with other offices in Adi Keih, Mendefera, and Keren. Inter alia, UNOVER, which was comprised of dozens of members from 35 countries, would help with the technical task of assessing the conduct of voter registration, campaigning, and polling, explaining the referendum process to the population, the launch of a civic education program to promote the right to popular participation, and the organization of international observers. The latter included representatives from: various UN Member States; UN special agencies; the UN Secretariat and the Economic Commission for Africa; and international non-governmental organizations. Other participants and observers included the Organization of African Unity (OAU, now African Union), the Arab League, and the Non-Aligned Movement, among others.

During visits to Eritrea and throughout their stay in the country, the international observers and teams were met with enthusiasm and welcomed with the utmost respect. Invariably, they expressed their appreciation and admiration for the people of the country. Memorably, the OAU delegation in Eritrea commented, “We admire the tenacity and courage of the Eritrean people. We saw people with their shirt sleeves rolled up engaged in the reconstruction of a war-ravaged country. The Eritrean people are very strong and Africa can learn from their courage and commitment.” 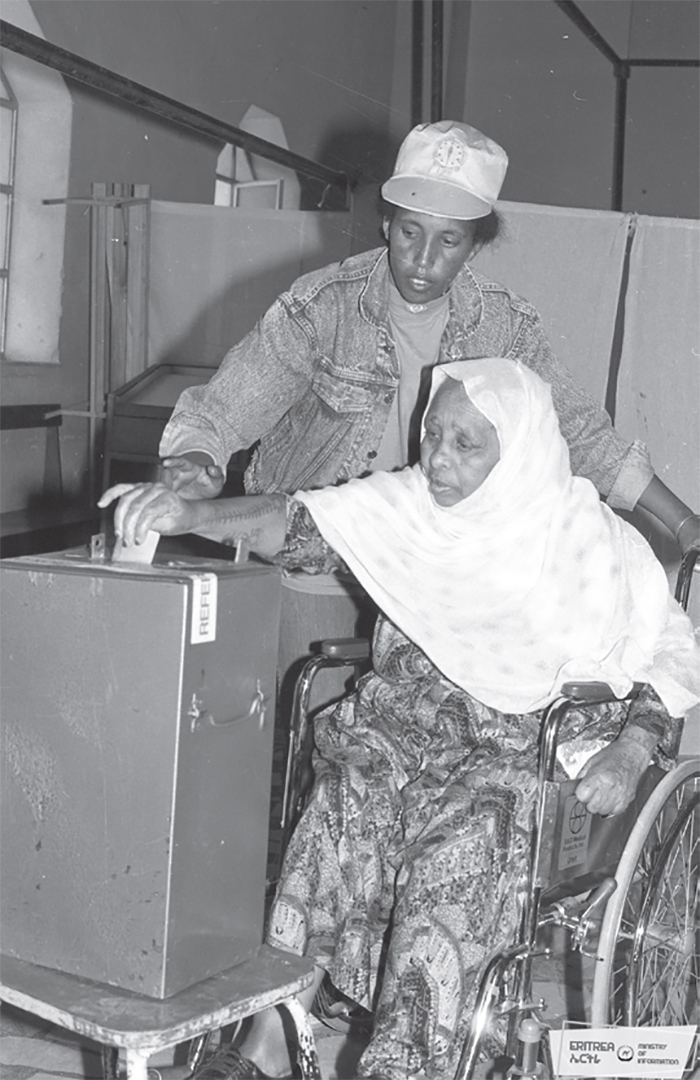 The actual conduct of Eritrea’s referendum was divided into three phases. The first phase corresponding to the registration of voters which began in mid-October 1992 and was completed on 1 March 1993. According to the Eritrean Referendum Proclamation (“The Referendum Proclamation, No. 22/1991”), any person having Eritrean citizenship and who was of the age of 18 years or older or attained that age at any time during the registration period, was qualified to be a voter. Eritrean nationality was granted on the basis of several distinct qualifications and conditions, which were defined and set out in the Nationality Proclamation issued by the Provisional Government of Eritrea (PGE) on 6 April 1992 (“The Eritrean Nationality Proclamation, No. 21/1992”).

Eritreans registered to vote: over 861,000 persons in Eritrea, slightly over 154,000 persons in Sudan, greater than 66,000 in Ethiopia, nearly 44,000 in Saudi Arabia, and about 76,000 in all other countries combined. Significant efforts were made to ensure that possible challenges to registration for some (e.g., illiteracy, cultural pressure against women’s participation, remoteness, etc.) were overcome. According to the UN and UNOVER, “the registration campaign was conducted smoothly”.

The referendum campaign, constituting the second phase of the referendum process, began on 17 February 1993 and ended on 21 April 1993, two days before the first day of voting. As a part of this phase, political rallies, public festivities, concerts, dances, and other gatherings were organized. Importantly, civic education initiatives were also developed, helping to explain voting procedures and techniques to as many of the electorate as possible. This included the production of public posters, voter manuals, and radio and television programs (in all languages spoken in the country). A number of mobile teams were also established in order to travel to distant regions to engage with remote, rural populations.

The third and final phase of the referendum process was the voting itself. On 22 April 1993, the UN Secretary-General’s Special Representative, Samir Sanbar, and Eritrea’s Referendum Commissioner officially announced the beginning of the referendum, which took place from 23 to 25 April 1993. In total, 1,012 polling stations were established throughout the country, operating from 7 am to 7 pm.

There was only one question on the ballot: “Do you approve Eritrea to become an independent sovereign state?” A total of 1,560,000 ballot papers were printed, numbered, perforated, and bound for official use. Each ballot paper, printed on an opaque brown paper in order to maintain privacy, had three detachable parts. Of the three parts, two were red and one blue. The first red part was numbered and retained by the voting monitor (so as to guard against repeat voting). The second red portion was a negative vote and the third blue portion was an affirmative vote. Inside the private booth, individual voters made their choice and detached one part. The part of the ballot paper corresponding to the choice made by the voter was dropped into the ballot box, while the other part was deposited into a disposal box in the booth.

The official results of the referendum were announced on 28 April 1993. A highly impressive 98.5 percent turnout was recorded. Remarkably, 99.81 percent of Eritreans voted for independence from Ethiopia, an emphatic result that many international observers explained they would not have believed had they not witnessed the entire process firsthand. Notably, the figures are even more striking when considered alongside those from the greater than 50 other independence referendums held around the world over the years: the average turnout and “yes” vote for independence is approximately 80 percent and 83 percent, respectively.

On the basis of the reports and observations of UNOVER and international observers, on 27 April 1993, the UN Secretary-General’s Special Representative officially announced that “On the whole, the referendum process in Eritrea can be considered to have been free and fair at every stage, and that it has been conducted to my satisfaction”. Speaking that same day, with the provisional results being shared, Isaias Afwerki, then the Secretary-General of the Eritrean People’s Liberation Front (EPLF) and the PGE, expressed that the referendum was “a delightful and sacrosanct historical conclusion to the choice of the Eritrean people,” and proudly announced that “Eritrea is a sovereign country as of today.”

Weeks later, independence would be formally declared on 24 May 1993, two years to the day after the EPLF had entered and taken control of Asmara, which had been abandoned by retreating Ethiopian troops. Subsequently, four days after formally announcing independence, Eritrea was admitted to the UN as its 182nd member by UNGA Resolution 47/230 of May 28, 1993. As well, the country established permanent representation at the OAU, joined the Intergovernmental Authority on Drought and Development (IGADD, renamed the Intergovernmental Authority on Development [IGAD] in 1996), and assumed observer status at the Arab League. Upon gaining independence, Eritrea not only became the first state in Africa to achieve independence from an African state, but it also had won the longest armed conflict in Africa’s history.

Exactly 28 years ago, Eritreans’ long-held dream, which much of the world had ignored, claimed was unattainable and impossible to achieve, or sought to extinguish, became reality. After decades of great struggle and sacrifice, Eritreans won their ultimate reward: freedom and independence.