How the horse-drawn carriage came back in Asmara during lockdown 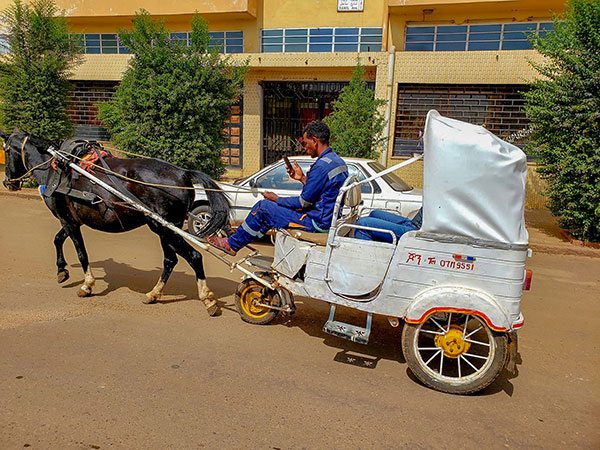 After a year of restrictions to prevent the spread of Covid- 19, we are now starting to see the country resume normal life. Schools are open, restaurants/ cafes are back to business and public transport has fully resumed. I never thought the sight of red buses and yellow cars can be so reassuring. How the roads of Harnet Avenue missed the company of whizzing taxis and red buses! It is a sight for sour eyes. But of course, the restrictions in most public activities and the prevention guidelines provided by the Ministry of Health has paid-off in controlling the spread of the pandemic in the country and keeping the public safe.

During lockdown and before the resumption of public transport this month, Eritreans had resorted to different forms of transportation. The bike was the number one mode of transportation chosen by Eritreans young and old, followed by the electric bike. And then you have the Carrossa, the buggy or carriage as it is known around the world. It is old and slow but reliable and eco friendly.

It is said the Carrossa from the Italian Carrozza (Carriage, coach) arrived with the Italians in 1890, the year the Italians occupied Eritrea, during which cars were rarities all over the world. The use of horse-drawn carriages to transport people and good was common.

The Italians made their way to Asmara from Massawa via Filfil ridding on covered wagons. In the 1920s in Eritrea, mules pulled heavy carriages laden with army supplies. Horses pulled coaches for people. The first Carrossas were four-wheeled carriages and were covered. You wanted to go to Adi Quala? Va Bene, Sali. Every ten kilometers a fresh horse waited along the road to be harnessed and gallop until the next tapa (Halting Place).

Gradually, the natives began to rent them and drive them. Then they owned them. The covering was taken off and the wheels reduced to two. Our Carrossa or buggy was on the making, an open one-horse drawn two-wheeled coach.

In the 1950s most of the coachmen were Eritreans. People used Carrossa to go to the hospital, to church, to the market, to visit relatives, and of course to reach home after work.

Besides, Carrossa transported cases of beer, cognac and araki bottles. And at times tourists would rent them to have some fun.

Back in the day, kids loved being sent by their mothers to fetch a Carrossa. Every child was eager to carry out such an adventurous task. It meant that they got a ride as they directed the coachman (be’al Carrossa) back to the house. The price was usually fixed but open to negotiation.

Sometimes, the Carrossa were used as a means to transport goods. Addey Tekea goes to the market to buy taff. She will have it ground at the mill. So it happened at times that Addey Tekea left the family’s supply of taff with the coachman (probably an acquaintance or relative) instructed him as to the location of her house and walked home. She was sure that the taff would arrive home safely.

In the fifties, since the number of those who could afford cars was small, Carrossa were used to transport brides, and the bridegrooms from Church to the das (tent pitched for the wedding reception).
As traffic became denser in Asmara, the buggies became a headache for city administrators and the traffic police. So it was finally decided to confine them the special areas of the city.

With the passage of time, their owners began to borrow money and buy taxis. My uncle was one of the few who kept his Carrossa.

“Why don’t you sell the carriage and buy a taxi like Aboy Tesfai?” asked Kibrom’s son one day.

“WHAT? Sell it? How dare you ask me such a thing? This carriage put clothes on your back and your siblings it also sent you all to school my dear son. I’ll not abandon a horse that has been so kind to me and m y family for a piece of metal. ” And that was the end of that conversation.

Now there are only a few buggies serving the public mainly transporting milk around different neighborhoods in the city while a few others are novelty carriages used for wedding pictures.

But the mighty buggy had to make a comeback. Everyone loves a comeback story. Fast forward to the year 2020, in the absence of public transport. The buggy had become one of the easiest and fastest ways to move from one part of the city to the other because the size of the Carrossa only allows one or two people in addition to the coachman, which also promotes social-distancing. Some became creative and put small cover roofs on their carriages to protect their customers from the scorching heat of the sun.

Just as in the 1950s people used the Carrossa to go to downtown, to visit relatives and the market. This time around it was Kibrom’s son who was driving the Carrossa. I don’t actually know what the criteria’s are to become coachmen though. Do you need a license for it? Do you have to learn how to make a U-turn or parallel parking?

Thirty years on the road of HRH development