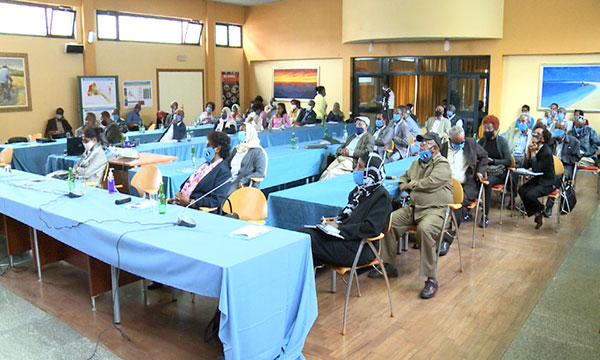 Asmara, 09 May 2021 – The Ministry of Health organized a two-day workshop on the progress of community-based sanitation programs at NCEW Head Quarters in Asmara.

Speaking at the opening of the workshop conducted from 6-7 May, the Minister of Health, Ms. Amina Nurhussien stated that effort is underway in line with world programs since 2009 with the view to ensure environmental health by introducing latrines.

Indicating that strong endeavor has been conducted to implement national declaration issued in 2018, Minister Amina stated that latrines have been introduced on about 60% of the nation.

Ms. Amina further noted that effort is underway in collaboration with partners in the implementation of policies to combat traditional and hazardous health practices.

Ms. Shaheen Nilofer, UNICEF Representative in Eritrea on her part stating the significance of the utilization of latrines in ensuring public and environmental health said that the program is yielding encouraging result in Eritrea.

Representatives of the Ministry of Health regional branches on their part delivered activity reports on various issues including Maternal and Child Rights as well as implementation of policies to combat traditional and hazardous health practices.

Participants on their part discussed on the reports delivered and adopted resolutions.