Asmara, 15 May 2021- The National Green Campaign Day, 15 May, has been observed in the Southern and Central Regions with planting tree seedlings.

Indicating that the tree seedlings planting was part of the program of the Central Region’s Green Campaign, Mr. Abraham Teklu, representative of the Forestry and Wildlife Authority, said that over one million tree seedlings are ready for distribution to various institutions for planting in the coming rain season.

Pointing out that green clubs have been established in 138 schools in the region, Mr. Abraham called on the clubs to play a leading role in the program. 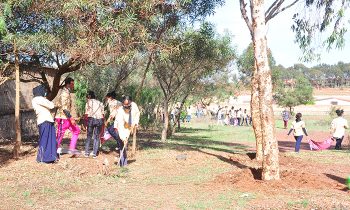 In the same vein, Mr. Tsige Woldegebriel, director of ‘Satreb’ school said that in the 2012/2013 academic year green clubs have been established at 12 schools in the Southern Region and that so far 2500 tree seedlings of 14 types have been planted and are in good condition.

Mr. Tsige also called on other schools in the region to follow the noble example of ‘Satreb’ school in establishing green clubs and promote the program.

‘Satreb’ school has been awarded in 2015 for outstanding performance in the greening campaign.