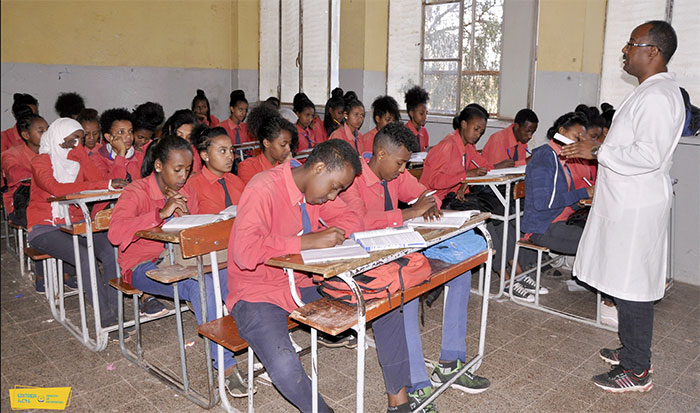 The Eritrean National Teachers’ Association’s (ENTA) main aim is to defend the rights and dignities of its members and preserve their privileges. It strives to create opportunities for the professional development of its members and assists them by giving, among other things, 20,000 Nfa for the family of a deceased member, financial support for members’ health care and loan for newly married couples.

Although the association’s freedom and independence was undermined by the Ethiopian regime following Eritrea’s annexation, the teachers remained united especially because most of them were Eritrean. Like their fellow Eritreans, many were active in the national struggle for independence, which was demonstrated by their joining en masse the armed struggle.

Eritrea’s National Policy of Education sees the provision of basic education both as a human right and a tool that raises the overall awareness of citizens. Anchored in this principle the Government has since independence been building schools and developing teachers to make education accessible all over the country. This has resulted in a dramatic increase in the number of teachers to meet the needs of the growing number of students. The association that had a few members when it was established in the 1950 had 6007 members in 1994. There are now 19,673 teachers in the country who are all members of the association. Mr. Simon said the association has chapters all over the country that convene every three years to elect the leadership.

In an effort to empower adults who did not have any schooling, the association stared a literacy program soon after Eritrea’s independence targeting freedom fighters based in different towns. For instance, many volunteer teachers engaged in teaching in their summer holiday of 1992. The association also taught disabled fighters at Denden Camp for one year in the academic year of 1992-1993. In addition to teaching, it gives financial support for different causes, including support for disabled fighters and families of martyrs, and material support to schools.

The ultimate goal of the teachers’ association is to build an educated generation. To make this a reality, Mr. Simon said, teachers should continue to play their critical role by teaching and leading by example. He also called on teachers to help strengthen the association and avail themselves of its services.