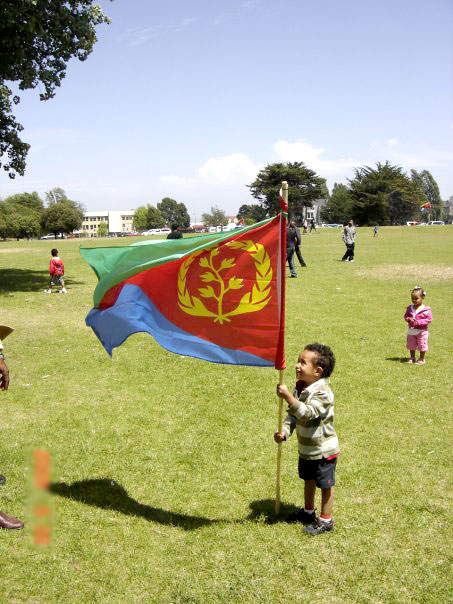 It was exactly 6.P.M three days ago when I reached around the 6th police station. Aside from me many people were walking up and down the street. That moment I heard a whistle. I stood straight at attention and gazed at the flag with deep respect and delight while the beautiful colors waved in the gentle breeze at dusk. Those who were driving also stopped and got off their cars.

A national flag is a human-made fabric that symbolizes a country. The Eritrean national flag is a symbol of the country’s history and its future. It comprises two triangles in blue and green with a red triangle pointing away from the hoist side. In the center of the red triangle are golden olive branches. The olive branches, which were adapted from the 1952 Eritrean flag, represent peace. The green color in the flag stands for the agriculture and livestock of the country, the blue represents the bounty of the Red Sea, and the red stands for the bloodshed in the struggle with the 30 leaves in the wreath representing the thirty years spent in the armed struggle.

Eritrean freedom fighters sacrificed their lives to accomplish their mission in the struggle for independence. There were over 65,000 martyrs and tens of thousands of disabled fighters during the 30 years’ war for independence. Moreover, thousands of civilians were killed. We have to show respect and express gratitude to all patriots who fought and continue to fight for peace and development.

When I was around six years old, my oldest aunt, a freedom fighter, used to tell me stories about the armed struggle in a way I could understand. A part of the stories that involved the role a camel played during the armed struggle grabbed my attention, and there is one particular incident that I can never forget. It was 1982. The Derg army was preparing for the biggest offensive since the beginning of the armed struggle. Its goal was to destroy the independence struggle once and for all. The freedom fighters, with the help of their people, started to take actions. Everyone was contributing as an Eritrean.

The peasants used their camels to transport ammunition. My aunt and other fighters were moving to the frontline accompanied by three camels. But on their way the camel that was leading the caravan stepped on a landmine, which killed the two camels and injured the third one. The third camel lost its eye and was badly injured. Nevertheless, it completed the journey and reached the front line.

The national emblem of Eritrea, the camel, was adopted on the second anniversary of Eritrea’s independence, 24 May 1993. The camel was a reliable means of transportation during the armed struggle. Since camels can carry heavy loads and travel long distances enduring thirst and hunger, the freedom fighters used them to transport ammunition, food supplies and wounded fighters. They were the best and most loyal servants of the Eritrean patriots for 30 years.

Another national symbol of a nation is the national anthem. A national anthem is generally a patriotic musical composition that evokes and praises the history, tradition, and struggles of its people, recognized either by a nation’s government as the official national song or by convention through use by the people.

“Ertra, Ertra, and Ertra” the national anthem of Eritrea holds a deep rooted history of the era before and after the 30 years of armed struggle.

The lyrics of the Eritrean national anthem were written by Solomon Tsehaye Beraki, and the music composed by Isaac Abraham Meharezghi and Aron Tekie Tesfatsion. A Certain etiquette is supposed to be observed when the national anthem is playing and when a flag is raised and lowered. It usually involves military honors, standing up straight, removing headwear, etc.

The national anthem is played at national holidays and festivals. It is also sung at schools during the flag hoisting and lowering ceremonies. Aside from that radio and television stations play the national anthem when they sign in in the morning and when they sign off at night. Every word stated in the anthem is either about the past or the future. The three mentioned above are the main symbols that represent not only Eritrea but also the sacrifice made for its independence.

May – A month of Dignity