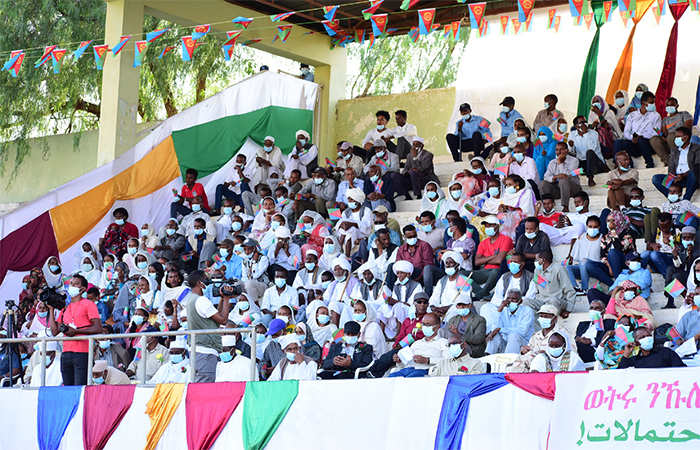 Eritrea’s Independence Day Anniversary celebrated on May 24, is one of the most important chapters in Eritrea’s history. After three decades of fierce struggle against, the then, one of Africa’s strongest armies, the valiant Eritrean liberation fighters triumphantly captured Eritrea’s capital, Asmara, thus heralding the total liberation of the country.

Besides, this day has a special meaning to every Eritrean because the nation’s right to independence and self-determination was denied by the superpowers through federation and later, annexation. Eritrea’s independence was not given in a silver platter; it demanded heavy sacrifice. It was independence brought through pure determination, immeasurable sacrifice, unabated commitment, patriotism, and unparalleled courage. Hence, Eritrea’s Independence Day in every corner of the country and abroad is celebrated in a patriotic zeal, in which Eritreans inside and outside the country depict the heroic feats of our fighters. For this reason, the 30th Independence Day anniversary was colorfully celebrated in all the six regions of the country and diaspora under the theme “Resilient as Ever”.

The celebrations of the Northern Red-Sea region were held in the port city of Massawa on May 20. Ms. Asmeret Abraha, Governor of the region, thanked the people for making the event a success despite the COVID-19 challenges. The Governor went on to say that Eritrea’s independence was achieved to lay a strong foundation to ensure social justice and to develop the academic and vocational capacity of citizens especially to the youth and added that everyone is working on it. At the event, winners of poetry and short story contests were handed out prizes by the governor.

In a similar fashion, the Independence Day celebrations of the Gash-Barka region were held in Barentu on 20 May at the regional level. Ambassador Mahmud Ali Hiruy, Governor of the region, admired the fortitude of the Eritrean people in achieving Independence and their toil in the nation-building activities. He also expressed his appreciation to everyone who participated in the coordination of the event for their careful planning to avoid the hazards of the COVID-19 pandemic. Various artistic shows that depict the importance of the day and the sacrifice it claimed were featured in the event.

Similarly, the Southern and Southern Red Sea regions celebrated Independence Day on 22 and 23 May respectively. In the southern region, the celebration was held in Mendefera. At the celebratory event held in Mendefera city on May 22, the Governor of the Southern Region, Mr. Habteab Fessehatsion said that a huge investment made in all sectors, as well as the integrated effort by all stakeholders over the past 30 years, have registered praiseworthy achievements.

Meanwhile, the Independence Day anniversary was celebrated in the Port City of Assab on 23 May at a regional level in the Southern Red Sea region. At the event, Ambassador Seid Mantay, Governor of the region, noted that in the past 30 years the Eritrean people have emerged victorious by foiling different hostilities and challenges and called on every citizen to strengthen participation and contribution in the nation-building process.

Anseba region and Sawa also celebrated the 30th Independence Day anniversary colorfully on 23 May with patriotic zeal under the theme “Resilient: As Ever” featuring various artistic performances. At the celebratory event held in Keren city, the Governor of Anseba region, Ambassador Abdella Musa, said that the heroic feat the people of Eritrea demonstrated as well as the noble values cultivated and nurtured during the armed struggle have played a significant role in realizing praiseworthy achievements in the last 30 years of Independence.

Likewise, at the celebratory event held in Sawa, Col. Debesai Ghide, Commander of Sawa National Service Training Center, stated that Eritrea has realized its independence and safeguarded its sovereignty thanks to the precious blood of its sons and daughters. In the event, many colorful and artistic patriotic performances were held. It was performed by students of the 12th and 13th round of vocational training center and a military parade was held by members of the 34th round national service.

The celebrations by Eritrean nationals in the diaspora also include events in Ethiopia, South Africa, Kenya, Kuwait, Republic of South Sudan, as well as Jeddah, the Kingdom of Saudi Arabia. The celebratory events featured cultural and artistic performances, sports competitions, and other programs in compliance with the guidelines issued in their respective countries of residence aimed at controlling the spread of the covid-19 pandemic.

At the celebratory event which was held in Kuwait, Mr. Humed Yahya Ali, Charge d’Affairs at the Embassy of Eritrea in Kuwait said that the Eritrean people in the past 30 years have stood in the face of hostilities and conspiracies against its independence and sovereignty. He also added that their bravery and hope finally paid off. Likewise, nationals residing in the Republic of South Sudan celebrated the 30th Independence Day anniversary on 23 May in Juba in the presence of South Sudanese friends of Eritrea.

In the same vein, the Eritrean community in Jeddah, Kingdom of Saudi Arabia, celebrated the 30th Independence Day anniversary by renewing their pledge to strengthen contribution and participation in the nation-building drive. The Eritrean Consul General in Saudi Arabia, Mr. Abdurahman Osman, congratulated the people and members of the Eritrean Defense Forces. He also added that the national development program will be successfully implemented through popular participation.

Last but not least, a celebration event was held in Sudan, Kenya, and in the South African cities of Johannesburg and Pretoria. At the celebratory event which was held in Sudan Mr. Isa Ahmed Isa, Eritrean Ambassador in Sudan congratulated every national in and outside of Eritrea for making their dreams of independent Eritrea come to reality. He added that commendable achievement has been registered with the view to realizing a self-reliant economy. Mr. Beyene Russom, Eritrean Ambassador in Kenya, also congratulated the Eritrean people and its Defense Forces and allied for renewing a pledge to reinforce participation in the national development endeavors.

Eritrean nationals in Italy, Ethiopia, and the cities of Johannesburg and Pretoria and their environs also enthusiastically celebrated the 30th Independence Day anniversary featuring various programs.