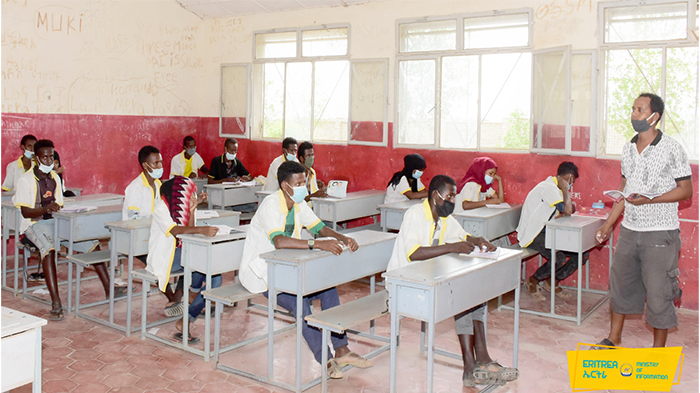 Thirty years ago, apart from some adult literacy campaigns that were carried out by the EPLF, there was literally no school to talk about. But today there are schools in 14 out of the 15 administrative areas of the sub-zone. In addition to kindergartens, the sub-zone has 34 schools, including primary and secondary, that enroll 4,000 students, 33% of whom are girls.

To make education accessible to all citizens, schools have been built in remote parts of the sub-zone. This is a major achievement but the enrolment of students has not yet reached the desired level. Mr. Osman Arefa, the administrator of the Foro sub-zone, said, “Although a promising outcome has been registered, the nomadic life continues to be the main challenge limiting the number of students attending schools relative to the availability of schools.”

Mr. Osman added that some students have not been able to go to junior schools due to the lack of such facilities in their vicinity. As an interim solution, the administration of the sub-zone is considering building boarding schools in areas where such problems prevail. The resettlement of communities living in scattered villages needs to be done rigorously to make social services easily accessible in the sub-zone.

A literacy program for adults was introduced with the opening of new schools in different parts of the sub-zone. Currently, there are 42 centers of adult education that are operated by the Ministry of Education.

The provision of healthcare services in the sub-zone is also commendable. Healthcare facilities in Foro, Robrobia, Erafayle, and Lehazien and newly constructed healthcare centers in Emule and Mahfide are giving effective services. The scattered nature of the villages and some highly mountainous places pose a challenge for the effective and easy delivery of health care. These places are reached through foot medics whose typical services include immunization, diagnosis, and public health awareness campaigns.

Mr. Mehari Kalab, the administrator of health facilities in the sub-zone, said that people who live in the sub-zone are aware of the benefits of healthcare services and collaborate with healthcare workers. He said maternity service has improved with more mothers now attending prenatal and postnatal services. He stressed, “As a result of years of hard work, the sub-zone has been able to make a significant reduction in the incidences of common diseases and death rates during childbirth.”

Mr. Mehari added that the role of healthcare professionals in raising awareness of people about various healthcare issues is so crucial that the sub-zone has shown encouraging results in the eradication of FGM and other harmful practices that affect women’s health. Health workers regularly travel to the remote parts of the sub-zone to give vaccinations, which resulted in 98% immunization coverage in 2020.

Transport has been one of the areas where major developments have been seen in the sub-zone. The newly constructed strategic Egila-Foro road has connected the villages that were scattered in the mountains and paved a way for improved access to different kinds of social services. With the opening of the road, people’s lives have been transformed.

Local communities are getting regular transportation services along the Massawa-Assab and Foro-Adi-Keyih routes. Other commercially strategic roads serving the people include Foro- Zula, Foro-Malka, Foro-Aligede, and Foro-Robrobia roads. Moreover, people in areas along the Massawa-Foro and Adi- Keyih-Omarkabre routes get regular transportation service while the other areas are served once a week on market days. Foro sub-zone has an extensive coastal area and many of its inhabitants make a living using the resources of the sea. Mr. Osman said that although they have abundant sea resources, they haven’t yet been able to exploit them to the maximum level. This is partly because the fishermen do not get good prices for their fish at the town market and the people’s eating habit doesn’t favor seafood. Mr. Osman advises residents of the sub-zone, particularly those who live around the coastal areas, to make maximum use of the marine resources. He added that their administration needs to do more to help the local communities become beneficiaries of locally available resources.

The water around Foro has high salinity due to its close proximity to the coast and affects residents of Kumhule, Mahfid, Arebto, Ruba- Hadas, Dnango, Gebgeb-Wasana, and some parts of Ayromale and Malka administrative areas. To address the challenge clean water from wells dug in remote areas is distributed at the center of the administration through water pipes. In the villages atop high mountains, water is stored in water tanks collected from a chain of water canals. This secures clean water for the inhabitants for some months and saves them the trouble of walking long hours to fetch water.

Foro sub-zone has a total of 8,300 hectares of fertile farmland which is cultivated using the rivers that flow towards Zula during the rainy season of the highlands and lowlands. And through soil and water conservation activities to enrich underground water and the construction of micro-dams and water tanks, so much has been done to make water available sustainably. Farmers in the Foro sub-zone grow maize, sorghum fruits, and vegetables.

Foro sub-zone, home to Adulis and Erafayle’s hot springs, is one of the ten sub-zones of the Northern Red Sea region. It borders Massawa to the North, Gelalo sub-zone to the Southeast, Ghinda’e sub-zone to the Northwest, and the Southern region to the West. The total area of the sub-zone is 2,770 square km that are grouped into 15 administrative areas. The population of the sub-zone is 44,000, most of whom, 89%, earn their living by farming and raising animals while 11% live on fishing and trade. The sub-zone is home to five ethnic groups: Saho, Tigre, Afar, Tigrinya, and Rashayda.