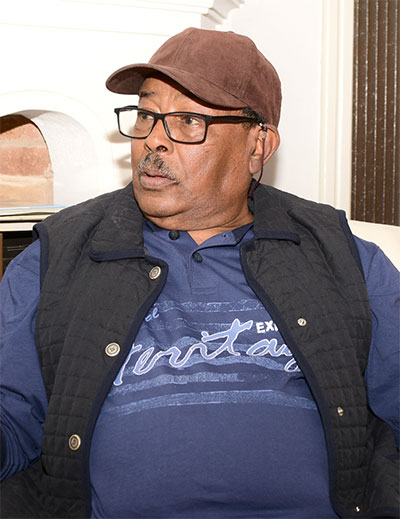 Engineer Asgedom Weldemichael, one of the Eritrean music legends, is here in Asmara to celebrate the 30th anniversary of Eritrea’s Independence at home. His fascination with the undying resilience and strength of the Eritrean people have been expressed through his music that touch every Eritrean’s heart. He performed at Cinema Roma in an event organized to celebrate the 30th Independence Day. Engineer Asgedom’s songs are everlasting having been leaving their indelible marks on generations of Eritreans since the 1970s. Some of his songs have been remixed by young artists.

Engineer Asgedom welcomed us into the warmth of his home for an interview.

Thank you. It is nice to be back home, especially at a time when we are celebrating our 30th anniversary of independence, united as a nation. This adds so much joy to my visit.

I haven’t been that active after that interview. I only did a song about the peaceful environment that we have been able to have with Ethiopia. It truly was a happy occasion for me and for all Eritreans across the world. It was clear that the “No war No peace” situation has affected our region negatively for so many years and to be able to close a dark chapter behind and move on meant the world to me. As a people we were in colonization for so long, that it was time to start an era where peace dominates.

Eritreans are and have been resilient throughout their history. By working hard in harmony, we were able to defeat enemies. Fighting for our rights and our land has never stopped even after we got our independence. It was 30 years of struggle in the fields for Independence and 30 additional years of struggle to keep our land stable and safe. Eritreans are the kind of people who think about and care for their fellow Eritreans, and that is the only way we were able to survive everything that has happened to us in the past. That is one of the qualities of being an Eritrean. Now, as a people, we stand tall and cherish our journey and freedom together, and that to me has more meaning than anything else.

Most members of the Eritrean community in diaspora have an amazing connection with one another. I am always proud to see youngsters born and raised abroad come together at events organized by Eritrean communities to celebrate and attend seminars on current issues about their homeland. Eritreans don’t forget their culture and identity wherever they go. It’s just something natural. Although I don’t think there has been that much of an activity because of Covid-19, the Eritrean diaspora have been helping out one another for all those years. Think about the festivals that used to be held at Bologna, Italy, where Eritreans from all corners of the world gathered around to express their solidarity to the struggle for the freedom of their country. I would say that the struggles the Eritrean diaspora have carried out is fantastic. Not only did they have a big role in the struggle for Eritrea’s independence but the younger generation is continuing the legacy of their parents.

I believe that we have very talented and skilled musicians. And I am always happy to see that we are going somewhere in the music industry. What I want to stress in this topic is that we need to know our culture and where we come from when writing music if you want to be recognized for something that is only yours. People won’t be interested if you are playing something they are familiar with. People want to see and hear something different. We have many traditional beats such as Emblta (traditional horn), Abangala (traditional stringed instrument), Meleket (traditional horn) Kirar (traditional stringed instrument). I am sure if we study those instruments and experiment with them, we can have our own brand that we would be known for internationally. The young artists are doing a great job. I advise them all to keep up the good job and focus on making great music with the support of our rich culture mixed with modern music.

Mixing the traditional and modern instruments does not mean you are changing the culture but experimenting with enhancing the music. This is something we can definitely do.

I have only had three people remixing my songs, for which I was asked for permission. And I like the remixes that have been made so far. I think it is a good idea to revive the old music and keep it alive. I only would like to ask that they don’t change the originality of my songs.

Just that we are at a time when we should be cautious. We have seen developed countries experience dreadful amount of deaths due to Covid-19, but that hasn’t happened to us. I believe that is because we are disciplined and care to follow the instructions given by the Ministry of Health. The world was forecasting that Africa was done for when Covid- 19 was declared a pandemic, but we have survived it. It is all because we care. Let’s all keep up the good job.

In Eritrea, I am sure a bright era is ahead of us. Let’s all work hard.