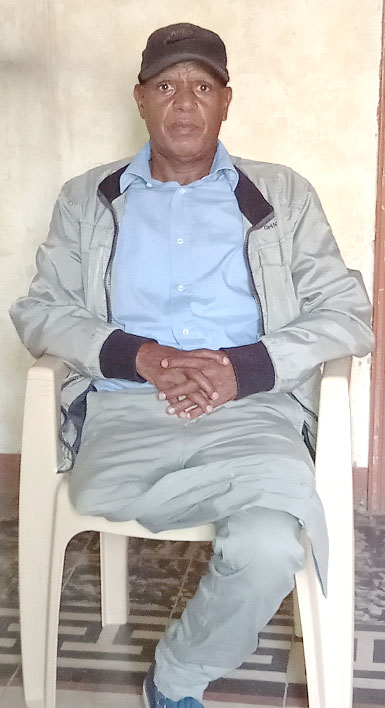 Mr. Solomon Drar is an Eritrean legendary artist whose immortal works have left indelible marks on the hearts of many people. He put his everything to his artistic works. He is a writer, a poet and a lyricist. Following is our brief chat with him.

Thank you for the invitation. I am Solomon Drar, born in 1956 in Senafe. I attended my elementary school in Embaseyas School and did my 6th and 7th grades in Senafe. After finishing 9th grade in Dekemhare city, I dropped out of school to join my peers in the liberation front. I joined the E.L.F (Eritrean Liberation Front) at the end of 1975. After staying with the E.L.F for about a year and half, I was involved in a movement known as “Falul” and joined the E.P.L.F (Eritrean Peoples Liberation Front) in 1977. I was with the combatant units until the end of 1977. At the end of the year, I was sent to a unit of the disabled as I got an injury on my leg. I stayed there performing different tasks until Eritrea’s independence. After independence, I was at first a member of the committee of the association of the disabled veterans and then worked for the P.F.D.J (People’s Front for Democracy and Justice) in its political affairs branch for so many years.

Well there are many works as you might know. I have published three books. You might have heard about one that is named “Ertrawyan Commando” and there is another one called “Echa hanti sdra”. During the struggle for independence, there was also “Mekete”, the only manuscript that was selected to be published by the EPLF from amongst 160 works submitted by the freedom fighters. There is also an interview of the president that is made into a book called “Mezekrn Merahn”. Some of the movies that I made are “Eten mehazut”, a television serial I made with Wedi Feraday, “Zban hgi’ba”, and “Emnet”. There is also a feature film “Trhas” that I made with two other people. I have written around 200 lyrics. Some of the popular ones are “Nkid tray”, “Adha”, “Adi mahla” and “Kikewnyu kemey zeykew”. I do also have poems such as the well-known “Aymoten Merhawi”, which was written in 1992. I have also written some 100 to 150 articles in different magazines. My life is basically connected with writing. Almost all of the contents of my works express nationalism and the love of country; of course, there are very few love songs as well.

I think the hardest thing is coming up with new ideas every time, but I wouldn’t consider that a hardship. For big days like the Martyr’s Day and Independence Day, you want to come up with a piece that is worth presenting on such a day and this makes you feel the pressure. Of course you need to shed sweat for your work and that is all part of the job. There are some pressures as people keep asking you here and there about your upcoming new works. But it all motivates you; so it’s fine. I wouldn’t say there are things that stop you from working.

I do get asked this question a lot by other people as well. But you can’t be precise in answering it because you need to conduct a thorough study to speak confidently. But generally speaking and in my opinion, our songs are not progressing as they are supposed to. We can see that the melodies of the songs are repeated over and over again. Artists keep imitating melodies and so it makes the songs a bit weak. Plus the advancement of YouTube makes it impossible to regulate contents. When we talk about films and drama, I personally think that the actors and actresses are incredible. You can see that they have a lot of potential as well. Directing, too, is going well. The weakness may be coming from the authors. You need a strong script for a strong movie. I think the authors need to do better.

To improve the art and for better progress, we need to take courses and should continuously evaluate our works by criticizing one another. That would make artists more aware and better at their works. The budget is also an essential part in making exquisite dramas and films. Therefore, we need a stable budget, smooth directing, capable actors and, most of all, a strong and rich content.

I can’t get the heroism and determination of all the fighters out of my memories. One scene that I can’t get out of my mind is the death of Tsegay Tekle, a combatant. He died at a time of a heavy strike from the enemy. I couldn’t forget it because when he was hit, I had to hold him on top of me for more than 12 hours. I shared his blood. We couldn’t make any move as the strike was on top of us. I just had to hold him tight for such a long time. I wrote the poem, “Aymoten Merhawi”, and the song, “Adha”, to memorialize him. I just cannot forget Tsegay Tekle. It felt like we were both dead for 13 hours…

We know how big and important our Martyrs’ Day is, and I hope we all remember and honor it. I would also like to express my gratitude for your invitation. Thank you!

Eritrean ‘Manjus’-Lioness of the Jungle