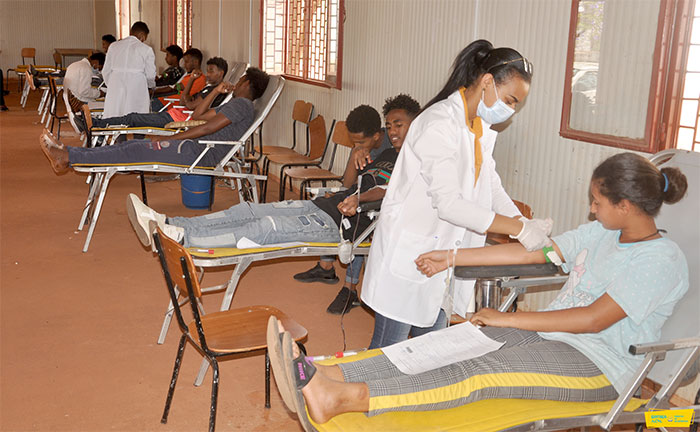 When I was in high school volunteers and medical staff from the blood bank would come and give us an insight into the importance of blood donation. There was some sort of a dictum they repeated constantly, “Donating blood is rather a self- serving act.” I never fully understood what it meant, and at the time I was not able to donate because I was underweight. Now that I am donating I know what “self-serving” implies; by donating blood you are helping not only others but also yourself as the act of giving can boost your own well-being. Also, every person who donates blood undergoes a simple physical examination and blood test before donating blood, which in itself is a reassurance of the person’s health.

The history of blood donation in Eritrea is known to have started during the struggle for independence in 1976 at the hospitals constructed by the Eritrean People’s Liberation Front (EPLF). In its early stage the EPLF did not have a facility to form a blood bank, but in 1984 a temporary blood bank was set up to give service at the front’s hospital called Arareb. A blood bank was also opened in Asmara in 1981, which mainly served war injured Ethiopian soldiers. After independence the main blood bank was set up in Orotta Hospital with smaller blood banks formed later in eight other hospitals.

In January 2002, Eritrea created the free-standing National Blood Transfusion Center (NBTC). At the beginning, the center, led by a medical director, had only a laboratory, blood donor and administrative services. Since 2007, however, divisions for important functions such as quality management service and data management system were included in the organizational structure. 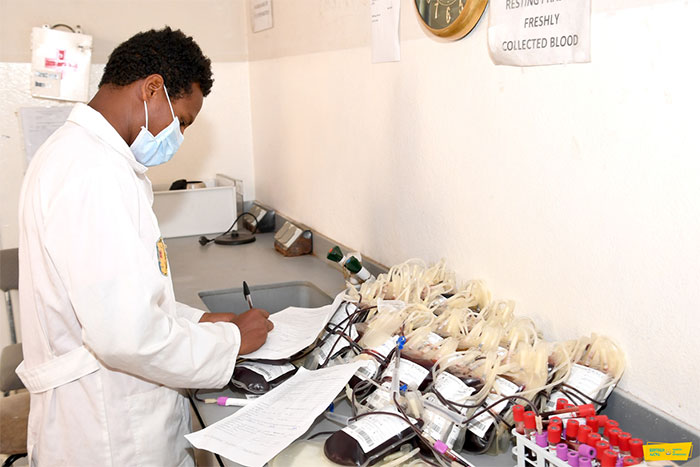 The blood donor service is the division responsible for conducting campaigns and collecting blood from volunteers. Under this division, there are sections that recruit donors and counseling services. Mobile teams are often assigned to remote areas to deliver services and relieve people from travelling to the centers. Since its establishment, the blood transfusion center has been striving to provide safe and adequate blood nationwide. Moreover, the NBTC separates blood components from a whole blood (WB). This means that a patient in demand of a blood component gets it separately, whether it is RBC, plasma or platelets, instead of being indiscriminately given WB. This is significant in that it prevents placing unnecessary pressure on the heart, allowing it to function normally.

The annual target of the NBTC is to collect 12,000-15,000 units from voluntary non-remunerated donors. The estimation of 12,000- 15,000 units is the number approved by the World Health Organization (WHO) and is calculated in relation to past blood usage, number of hospital beds, total population and medical facilities. The amount of blood the bank collects ranges from 80 to 85% of the target per year. According to this year’s report by the NBTC those percentages are not what they want to accomplish. Mr. Abraham Yemane, medical director of NBTC, said the reason for not reaching the desired percentage is lack of awareness about the benefits of donating blood although it is gradually changing. He said this gives them hope that in the coming few years they will get the amount of blood they would like to secure. He praises the regular donors, who are active in helping address baseline demands at critical times. Campaigns are executed every now and then through meetings, pictorial exhibitions as well as staged dramas to enhance the willingness of society to contribute blood. It is to their benefit as it may reciprocally be transfused to them.

The blood collected by the NBTC comes from regular individual donors, employees as governmental and private organizations, civil society organizations such as the women’s, youth and student associations, high schools and the National Volunteers Blood Donors Association (NVBDA). In 2006, members of the association that have the rare blood type, RH-ve, formed a club to help meet the need for easier access of the rare blood type. Similarly, in November 2009, members of the association with RH+ve formed a club, and in 2011, the two merged as lifesaving clubs. At their first meeting in 2013, they transformed their club into an association, NVBDA. The association has branches in five regions of the country, and its goal, which is allied with that of the blood transfusion center, is to help address the shortage of blood in the country and provide safe blood to people who need it. 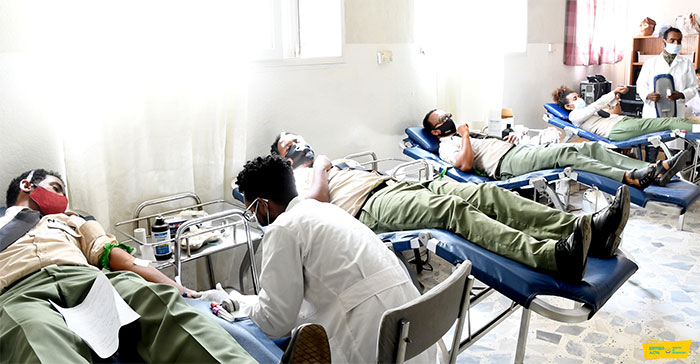 The Ministry of Health, through its clinical service under the medical department, arranges international relations to the center, if necessary. Swiss Red Cross (SRC) has contributed considerably toward the establishment of the NBTC, providing equipment and playing important roles for the blood bank to have its current status.

The quality management service is one of the best services of the institution. It follows standards to measure every activity within the center. It uses standards, quality manuals, Standard Operational Procedures (SOPs) and forms to assess the challenges faced and the service disruptions encountered as well as how well the activities are performed. Internal and external audits are done regularly to assess every division in accordance to its mission. The external audit is executed every three years by the WHO-recognized South African Bureau of Standards for blood banks. The auditors visit the center annually for surveillance audit and every three years for certification.

Each day, thousands of people need donated blood and blood products to keep themselves in good health or to be able to stay alive. Donating whole blood can help these people. The message of the bank to the people is to keep on donating blood.