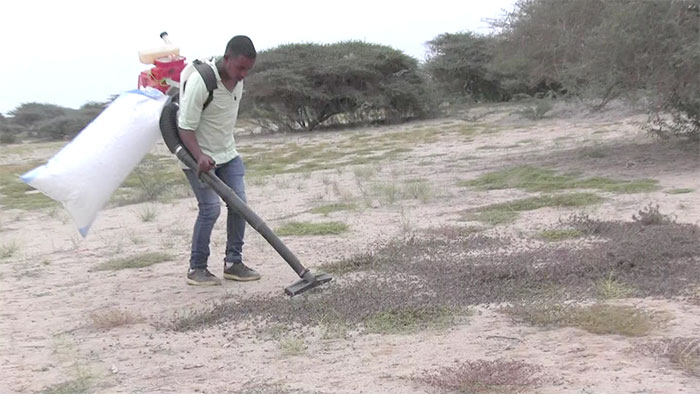 Eritrea is one of the frontline countries for migratory pests, in general, and desert locust breeding, in particular. Over the years, Eritrea has followed a preventive strategy that focuses on controlling locusts before they mature or start flying.

Recently, desert locust control operations have been reinforced through the participation of the Eritrean Defense Forces (EDF), local administrations and communities. As part of the control operations, over 1,200 experts, along with over 200,000 community members and EDF members have participated in practical training programs and workshops. These initiatives have focused on prevention, desert locust management, and information about safe use of pesticides.

Mr. Tedros noted that the adopted method of desert locust control in the country is a chemical- based control method. This method has been practiced for a long time in all the countries that are prone to desert locust breeding and infestations. A major problem of this method is the harmful effects of the chemical to humans, animals and the environment as well as the economic costs it requires. For this reason, the Ministry of Agriculture (MoA) has been looking for alternative solutions to minimize chemical use. Bio-pesticides and the harvest of locusts are considered viable options. An assignment was given to a group of engineers at the MoA to develop a new method of controlling locust invasions that could bring about positive economic, environmental and health effects.

As part of the efforts to control damages caused by the invasion of desert locust swarms, a group of engineers and plant protection experts from the MoA came up with an innovative pilot project of engine-operated desert locust sucker. The sucker uses a suction force, which is developed by an open impeller to suck the locusts while they are either on the plant or on the ground. The “Desert- Locust Sucker” is mounted at the back of the operator and can be used on locusts that are at different stages of their growth. The engine rotates the impeller to develop a suction force to suck the locusts along with the soil, and on the other side it blows air to remove the soil through the small openings of the collection bag.

After prototype of the machine, the group conducted a trial on the breeding area of locusts and came up with a concrete idea about the final design of the machine.

Engineer Abraham Habtemichael and Engineer Simon Kefela, members of the research and development team of the Desert Locust Sucker project, said that at present chemicals such as Emulsified Concentrate (EC) and Ultra Low Volume (ULV) are mostly used in controlling hoppers and adult locusts. They said the MoA initiated the idea to harvest locusts in the year 2020 to effectively utilise the locusts for economic and nutritional purposes, and they were instructed by their senior supervisors to develop a locust sucking machine.

“The main objective of the study is to develop a locust sucker which is suitable for the end user of the machine in Eritrea and abroad,” they said. The machine is designed to perform an efficient sucking and cleaning operation. It will also be easy to be maintained and operated by the users.

The engine-operated sucker is made by converting a motorized knapsack mist blower. The sucking force gently traps the locusts into a collection bag through the suction hose. The impeller, which is enclosed in a separate housing, is attached to the 1HP SI engine crank shaft. When the engine starts to run, it rotates the impeller to generate a suction force throughout the flexible hose, and the machine starts to suck locusts. While the engine is running, its speed is controlled by the operator until the sucking process is completed. The impeller rotates at the desired speed to maintain a uniform suction. This suction force can be adjusted for different sized locusts and has the sucking capacity of five kilograms per minute in a 0.36 meter square.

Airflow provided by the impeller picks up the locusts and soil together and delivers them to the perforated collection bag. The impeller of the machine serves as a sucker and a blower at the same time. The collection bag has an opening on its surface that releases the soil while leaving the locusts in the bag.

With their high feed conversion efficiency, locusts are capable of converting high protein diets and vegetation into body mass. As a result, they are quite rich in protein. They can transform low-value organic by-products into high-quality feed.

The project’s plan is to use locusts as poultry feed. Because of their sheer quality and their abundance in times of upsurges, animal feed industries should consider investing on harvesting hoppers and adult locusts on a massive scale as feed supplements.

Plans are underway for future modifications to increase the efficiency of the locust sucking machine and to improve its manufacturability. It will be made available in two types — engine-operated and 12v DC electric motor operated. The machine will be tested on locusts at different stages of growth and its economic feasibility and the nutritional content of the collected locusts measured to determine the adjustments and operating parameters of the machine to make it affordable for users.