The Ministry of Agriculture (MoA) is making considerable efforts to improve production of organic food through promoting bio-fertilizers (BF) and bio-pesticides (BP). Even though the MoA has carried out a number of interventions for promoting natural pesticides and fertilizers over several years, the impact was not promising until 2020. In early 2021, the MoA, along with the Ministry of Marine Resources (MoMR), began the process of introducing BF and BP. Relevant experts from various sectors, including the private sector, came together to establish a technical committee on February 11, 2021.

According to Mr. Dermas Sultan, chairperson of the technical committee and also a soil researcher at the National Agricultural Research Institute (NARI), the general objective of the initiative is to contribute to producing safe and nutritious food through environmentally-friendly, socially acceptable, and economically feasible agricultural production practices.

Mr. Dermas noted that the MoA has been working in various capacity development programs to introduce and expand organic farming and composting. Largely as a result of these efforts, the number of farmers who use compost and natural fertilizers has increased steadily. At the same time, however, since most Eritrean farmers utilize chemical fertilizers to improve their yield and have become accustomed to agro-chemicals to control plant pests, diseases, and weeds, the shift has been a bit challenging. Notably, after the establishment of the technical committee, fish by-catch and seaweed are being used mainly for BF and to some extent as BP.

Mr. Dermas, while outlining the general tasks of the committee, stressed on the following points; drawing the country’s potential map on the availability of raw materials; preparing BF and BP using locally available materials and testing the products in laboratories and carry out trials; producing promotional reference materials and guidelines; identifying potential farmers and institutions for piloting the BF and BP materials.

In a discussion about the committee, Mr. Dermas briefly described some of its progress, explaining, “The technical committee is divided into two sub-committees: the BF and BP teams. These sub-committees have conducted pilot tests with some farmers. Members of the committee have so far produced more than 200 litres of fish amino acid (FAA) and seaweed extract (SWE) and about 840 litres of neem-pepper-aloe extract. The extracts were distributed to farmers in four regions of the country for trials. 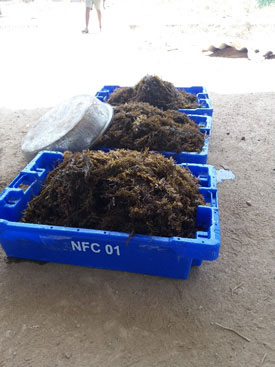 The BP group, which is responsible for promoting biological pesticides, has been working to identify resources and introduce pesticide production. According to Ms. Leula Mekonen, chair of the BP sub-committee and director of the Plant Protection Unit at the MoA, the core objective of the initiative is to promote Integrated Pest Management (IPM) and reduce the use of chemical pesticides. She asserts that the use of BP is not common in Eritrea, even though BP are made up of botanical and microbial elements commonly found in the country and could be a useful alternative to conventional pesticides. Notably, neem-based pesticides, widely used for agricultural pest management, are the most important and common botanical pesticides.

Ms. Leula further explained that introducing the new BP’s and promoting them to the farming community is one of the leading objectives of the BP sub-committee. She announced that around 840 litres of neem-aloe-chili pepper extract (botanical pesticide) have been produced as part of a pilot project and later distributed to four regions for demonstration in farmers’ fields. The plant materials were collected from Himbrti (Central Region), as well as Laelay Dengolo and Ghindae (both in the Northern Red Sea Region). The collected neem leaves of Azadiracta indica (from the lowland area) are used as a bio-pesticide in many countries. According to Ms. Leula, a reference manual that includes material on BP preparation and application methods has also been produced by the sub-committee. Furthermore, she noted that its shelf-life and rate of application are under study in NARI. When it comes to research findings, the concentration of the neem leaf extract has been found to be weaker compared to neem oil extract (neem seed extract). Since the quality and safety of BP products need to be standardized, a guideline for botanical BP registration was developed for commercial purposes in collaboration with the Regulatory Services Department of the MoA. Based on early assessments conducted in progressive farmers fields in four regions of the country, the use of BP on vegetables has shown effective insect and pest control, although further studies are required.

The prosopis tree, locally known as “temri musa”, is found in the lowlands of the country and can be used as an effective pesticide against fungi, bacteria, nematode, and insects from the extract of its leaves. As a result, the BP team collected prosopis juliflora leaves from Gahtelay, Northern Red Sea Region, and then prepared an extract from the material gathered. The product was pilot tested and applied on termites making mounds in Halhale (Southern Region) and Asmara (MoA compound), ultimately demonstrating promising results. 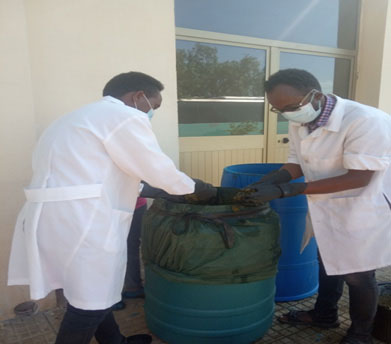 The BP team is also working on developing a garlic solution. Since garlic is a green, “completely organic” solution, it poses no serious health risks to human beings and does not kill beneficial bugs. When applied on crops, its strong pungent odor prevents the pests from attacking the plants and laying eggs. Two solutions of garlic with kerosene and vinegar extracts were prepared and their efficacy on whiteflies and other insects is under review. Although it is a bit early, promising results have been observed.

The BF team was established with the aim of increasing agricultural yields through production of healthy and sustainable organic inputs while at the same time cutting costs on procurement of chemical fertilizers.

According to Mr. Yosief Tewelde, coordinator of the BF team, several of the BF team’s major planned activities include: preparation of compost in solid and liquid forms; development of FAA and seaweed extract (liquid); development of bokashi (solid fertilizer), Indigenous Microorganisms, and Indigenous Effective Microorganisms in different forms and levels; utilization of biogas slurry; developing a national map of compostable materials and composting design under different environmental conditions.

The BF team began its work in March 2021 by assessing the status of composting across the country. Mr. Yosief also explained that samples were taken from different farms for laboratory analyses and documentation.

Working together, the BF and BP teams have been testing liquid fertilizers, compost, and a neem-pepper-aloe bio-pesticide on tomato and okra in farms around Asmara and the Southern, Anseba, and Gash Barka regions. Again, although testing is still at its initial stage, the results so far seem encouraging. According to Mr. Yosief, land preparation and layout designs for research on wheat and potato crops in the upcoming rainy season are also being completed.

In 2018, Ms. Adiam Rezene, an agronomy expert in the Central Region and a member of the BF team, headed for Japan to study the development of organic fertilizers. Based on her training and experience, she delivered a training workshop to the BP and BF teams about bokashi, Indigenous Microorganisms (IMO), and Indigenous Effective Microorganisms (IEM).

Production of organic liquid fertilizers: a promising approach to shift towards organic fertilizers

Preliminary trials for the production of organic liquid fertilizers, mainly FAA, were initiated by three agriculture graduates: Ms. Adiam Rezene, Mr. Million Tewelde, and Mr. Biniam. Teweldebrhan. The trials began at the end of 2019 at the Assab Green Nursery, Asmara. Ms. Adiam prompted the initiative, driven by her training and experience in Japan.

The small team began the trials by collecting 65 kilograms of shark discards from the Eritrean Marine Products Company. The shark discards are mixed with 20 kilograms of white granulated sugar and then left to ferment for about three weeks. This process produced the first FAA extract output, amounting to about 30 liters. 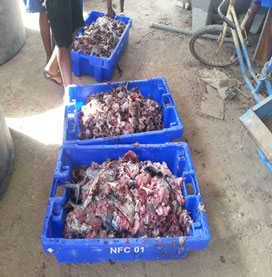 Following discussions with the MoMR, it was decided that the production of FAA could be more effective in Massawa. This was mainly due to the amount of discarded fish available and high temperatures in the region. According to Mr. Temesgen Gebremeskel, marine sciences expert and a lecturer at the Eritrean Institute of Technology, it was after successful FAA trials that the idea to use seaweeds casted on the beach as a source of organic liquid fertilizer was raised. This basic, yet profound, initiative garnered the attention of the MoMR for two important reasons.

Second, the MoMR has been relentlessly working on expanding the amount of living marine resources exploited sustainably along Eritrea’s Red Sea coast. According to Mr. Temesgen, utilizing the previously untapped living marine resources, such as seaweed, provides the MoMR with the opportunity to achieve its goals of distributing exploitation pressures, while also creating jobs for coastal communities.

Mr. Temesgen noted that production of FAA and organic liquid fertilizer began in February 2020 in Massawa. Although it was a limited quantity, it was enough to support studies on plants grown in pots.
Preliminary efficacy trials of the produced FAA and SLF were then conducted on green collards grown in pots in Massawa. According to Mr. Temesgen, “The limited, yet informative and rigorous, study allowed us to find a satisfactory solution that can be used as a liquid fertilizer.”

Parallel to these small-scale research endeavours at the MoMR compound, other trials on tomatos and carrots were conducted in Asmara, as well as on potatoes in Sheka-wedi-bisrat, Southern Region. The promising results from these trials led to up-scaling the production to more than 200 litres of FAA and 100 litres of organic liquid fertilizers. This is enough to perform field trials in four Eritrean regions.
Finally, Mr. Temesgen explained, “Currently, we are collecting feedback from farmers to gauge the efficacy of the liquid fertilizers, as well as its general acceptance among farmers.

Additionally, the MoMR is working on optimizing the production process by improving the biological fermentation phase and introducing locally designed and manufactured machines to facilitate the labour-intensive process.”

With this solid beginning on BF and BP, Eritrea is taking the road of achieving safe and nutritious food.