Improving maternal health: a commitment to rights and development 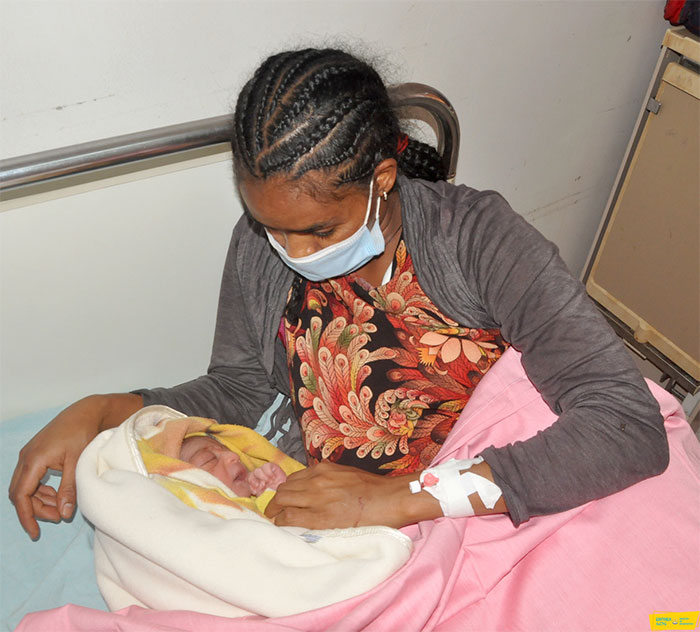 Two weeks ago the World Health Organization (WHO) announced the delivery of infection prevention and control (IPC) equipment to Eritrea’s Ministry of Health. According to reports, the equipment includes 12 washing machines, each with about 14 kilograms capacity. Worth a total of approximately 162,000 Nakfa, the equipment will be distributed to 12 maternity waiting homes in remote parts of the Southern Red Sea Region and is expected to significantly contribute to the effectiveness of IPC interventions in maternity waiting homes. (Recall that globally one of the greatest threats to the health of medical professionals and their patients is the failure to properly control the spread of infection in health or clinical settings.)

In addition to representing welcome news about a positive and encouraging development in Eritrea, the recent announcement also provides a useful opportunity to delve deeper into a highly important issue for Eritrea and the international community: maternal health and mortality.

One of the key global indicators of maternal health, maternal mortality refers to deaths that are due to complications from pregnancy or childbirth. Maternal mortality – and maternal health more broadly – is regarded as a matter of fundamental human rights. International human rights law includes fundamental commitments of states to enable women to survive pregnancy and childbirth as part of their enjoyment of sexual and reproductive health rights and living a life of dignity.

Additionally, maternal mortality is intertwined with development. It can trigger and greatly aggravate cycles of poverty, while a significant body of research has shown that maternal mortality increases the risk of children, especially girls, dropping out of school, and becoming malnourished. Of course, the UN Sustainable Development Goals (SDGs), a global set of goals for all countries – low-, middle-, and high-income – to meet by 2030 and covering a wide range of development-related objectives, also highlight the need for a reduction of maternal mortality as an important target to improving health and wellbeing. For instance, SDG Goal 3 calls for ensuring healthy lives and promoting well-being for all ages, while SDG Target 3.1 aims for reducing the global maternal mortality ratio (defined below) to less than 70 per 100,000 live births.

Over the past several decades, the world has made significant progress in improving maternal health and reducing maternal mortality. Despite this considerable progress, however, maternal mortality in many countries remains unacceptably high. According to estimates from a number of international health, development, and rights organizations, every day approximately 800 women in the world die from preventable causes related to pregnancy and childbirth. Moreover, millions of women annually suffer pregnancy-related injuries and disabilities. The vast majority – approximately 94-96% – of all maternal deaths occur in low and lower middle-income countries (predominantly in Sub-Saharan Africa [SSA] and Southern Asia). Also, young adolescents (those aged between 10 and 14) face a higher risk of complications and death as a result of pregnancy than other women.

In regard to Eritrea, maternal mortality has historically posed a great challenge. In fact, giving birth was one of the most dangerous things that a woman could do, and the country once had among the highest MMR’s in the world. Specifically, according to data from the Ministry of Health, in 1990, thus just one year prior to Eritrea finally winning its independence after 30 years of armed struggle, the country’s MMR stood at approximately 1700. Since that point, however, there has been substantial improvement in maternal mortality. By the year 2000, Eritrea’s MMR had been reduced to about 670, before being further improved to about 380 in 2013, and then 352 in 2015. Overall, Eritrea’s MMR was reduced by 79%, which was one of the best reductions anywhere in the world. Of note, this significant improvement meant that not only was Eritrea one of only a small handful of African countries that was able to achieve the UN Millennium Development Goal (MDG) related to maternal health, it had accomplished the feat considerably earlier than the final 2015 MDG target date. In April 2014, at a meeting in Luanda, Angola organized by the African Union Commission and the WHO, the African Ministers of Health acknowledged that Eritrea was one of the three African countries to have achieved MDG 5, related to maternal mortality. (The UN MDGs were the set of global development goals that preceded the current UN SDGs.)

What is also encouraging is that maternal mortality in the country continues to drop. For instance, while in 2000 there were about 990 deaths, this figure was reduced to about 650 in 2010, and then further improved to less than 500 for 2017 (the latest year for which data are available). For context, the MMR of SSA dropped from 990 to 510 between 1990 and 2013, representing a 49% percent reduction, while globally, the MMR for the same period was reduced from 380 to 210, a 45% decrease.

Eritrea’s improvement in maternal mortality is rooted in an array of factors. (As I have laid a lot of this out in greater detail previously and elsewhere, only some factors are listed here.) One important factor has been the establishment of maternity waiting homes, which are residential facilities where women living remotely may stay before giving birth at nearby health facilities. First introduced in 2007, primarily in order to better serve hard to reach populations, maternity waiting homes have now become an integral part of the national healthcare delivery system. In addition to providing a setting where women can be accommodated and receive vital services during the final weeks of their pregnancy, these facilities offer education and counseling regarding pregnancy, delivery, and postnatal care. (The significance of the latter should not be downplayed or overlooked, as the critical importance of the postnatal period is well established. Empirical work suggests that 50- 60% of global maternal deaths occur during the postnatal period.) Ultimately, maternity waiting homes have made a positive and significant contribution to reducing Eritrea’s MMR.

It is also worth noting that maternity waiting homes in Eritrea have promoted greater equity of access to healthcare for residents of rural and remote communities, who have historically been socioeconomically disadvantaged and faced with inequitable access to basic services. Accordingly, the facilities serve as a vivid illustration of Eritrea’s commitment to health, rights, equality, and social justice, as well as a clear reflection of the one of the pillars of the 2030 Agenda for Sustainable Development: the pledge to leave no one behind.

Other factors contributing to the nation’s improvement in maternal mortality include: high-level political commitment and prioritization; increased access to skilled care before, during, and after delivery; investment in the training of midwives and birth attendants; empowerment of women and girls; combatting HIV and provision of antiretroviral medications; improved transportation and healthcare infrastructure; increased school attendance and literacy rates among women and girls; comprehensive immunization, nutrition interventions, and control of communicable diseases including HIV and AIDS, tuberculosis (TB), malaria. Notably, these positive efforts have been led and carried out by Eritrea’s government and communities, alongside close collaboration and support from important global organizations, such as UNICEF, the WHO, the UNFPA, and the UNDP.

As a final point, while Eritrea’s progress in reducing maternal mortality is certainly positive and commendable, there is still considerable room for improvement. That means that moving forward maternal health and survival must continue to remain high on the country’s health, rights, and development agenda. The recent announcement on delivery of IPC equipment, which can help to prevent harm or adverse outcomes caused by infection to pregnant women and health workers in maternity waiting homes, is thus encouraging and significant.

Preconception Care Opening the Way to a Healthy Society