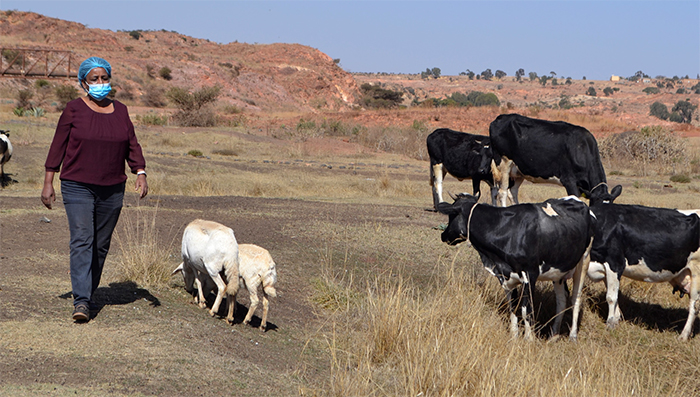 At a farm in Daeropaulos, Central Region, Mrs. Freweini is using her over 27 years’ worth of knowledge to empower young girls. The going has not always been easy, yet she has built a reputable brand in Eritrea.

Dairy farming is an enterprising business in Eritrea today, in part due to a substantial demand for milk and its associated products. Starting off in Elabered, Halhale, and Adi Seguedo as a preserve of Italian farmers during the colonial period, the business has grown to become a major source of income for many Eritreans. For nearly twenty years, FT Dairy, a family business, has been producing traditionally spiced and smoked butter and velvety cheese cream, best known by its Italian name Panna.

Returning home in Asmara in 1991 after 14 years in combat, Mrs. Freweini Tesfayohannes, a former freedom fighter, and a nurse by profession, then in her early thirties, founded the company. She turned her backyard and kitchen space of the house she’d rented then, into the seedlings that gave life to FT Dairy Products. At the time, her co-parent Mr. Temesghen Tekie was away on a national campaign to eradicate blindness caused by cataracts. In 1992, following the birth of their first child, the demand for a daily supply of milk for the baby took a toll on them. This saw them buy one cow to supplement the domestic supply of milk while selling the rest to boost their meagre. 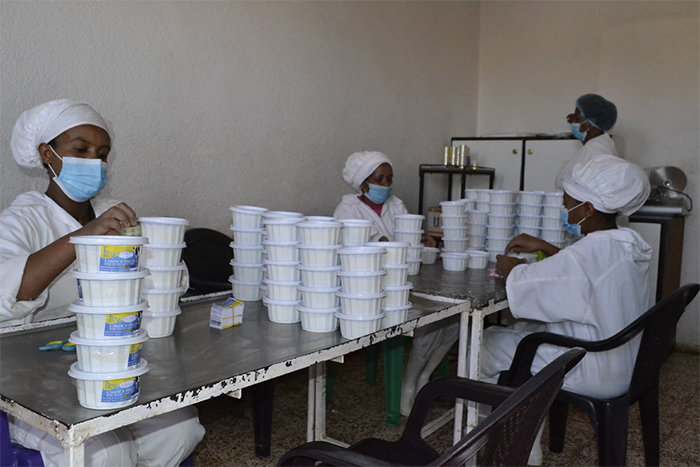 Their enthusiasm turned their kitchen into a laboratory where Mrs. Freweini learned and practiced milk alterations. Her husband, Mr. Temesghen, a Pharmacist by profession, was always a big helping hand as his knowledge of science and chemistry assisted his wife’s curiosity in understanding milk and the science in milk products. They read, studied, and practiced hard. Their limited knowledge of agriculture did not deter them from thinking big. Mrs. Freweini figured out that they could do better than they had been with only one cow and proposed breeding cattle as a business idea to her husband, an idea he supported.

In the beginning, the couple faced big challenges. They bought six cows, but only one was lactating and it died after a short while. They also faced opposition from the community. In 1996, the couple started the project as a cottage industry at the courtyard in their house. However, their courtyard was not big enough to accommodate many animals. A year later, Mrs. Freweini applied and enrolled in the Demobilization Program, which was aimed at assisting freedom fighters in their new ventures. Under the program, Mrs. Freweini quit her nursing profession and was assisted to start a mini dairy farm.

With a loaned initial capital, Freweini built up their first cattle cottage in Adi Seguedo. As the business picked, the couple was able to pay off the loans while selling milk in the neighborhood. Initially, Mrs. Freweini would make deliveries on a bike, however, as production increased, Lazza Farm Products started selling the milk to Asmara Dairy Factory.

In 2002, Freweini made more investments. At the time, she purchased Holstein cows from Elabered Dairy Farm. As time went by, she got better and better in cattle breeding and milk production. Over the course of time, she attended both short-and long-term training on farming, food (milk) processing, and other professions relevant to her business in Eritrea and abroad in Kenya, China, and the USA. At the same time, she represented her business in several conventions under the umbrella of the African Women Agribusiness Network (AWAN). A major breakthrough for the business was realized when the Ministry of Agriculture gave support and linkages.

In 2006, the plant was officially recognized as a milk-producing and processing plant. At that time, the company stopped selling milk and begun producing milk alterations for the market. As there was no mechanization at the time, most of the work was then done manually using traditional methods for many of the products. In the process, the National Animal and Plant Health Laboratory, under the Ministry of Agriculture, kept monitoring regular safety control tests to ensure the quality of FT milk products was upheld. In 2012, Lazza Farm Products underwent major changes introducing small-scale types of machinery. The plant was expanded on a 500-meter piece of land detached from the farmland. The transition was overseen by the Ministry of Agriculture and PUM. 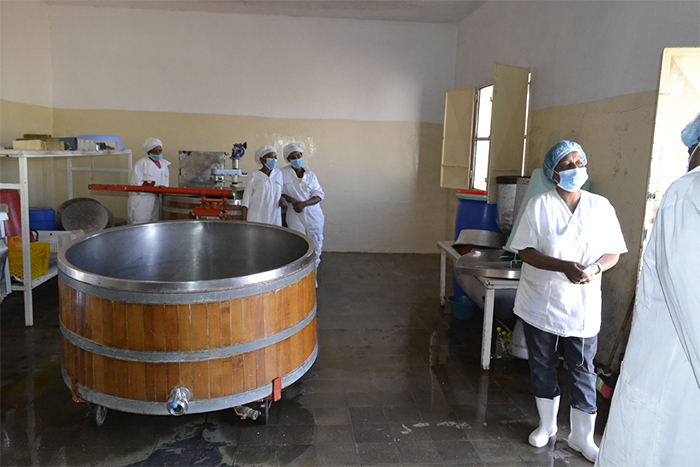 Since that time, FT has grown substantially. Starting with 350 liters of milk a day from their own cows and the 150 liters of milk from other farmers, the company now produces 1000 to 1200 pieces of 250-milliliter yogurt packs and above 10kg butter daily. In addition to yogurt and butter, they produce different types of cheese and cream. Due to its consistency in standards and quality, Lazza Farm Products was recently awarded a certificate recognition for its consistency in the quality of products.

The farm has extended to include cows, horses, and over a hundred sheep. Currently, there are at least ten full-time employees and over two dozen temporary employees. Mrs. Freweyni says her vision is to make milk products available in the whole nation at the lowest price possible. The Jeebna, for example, one of the earliest Lazza Farm Products cheese products, is widely appreciated in the lowlands of Eritrea. The price of milk in Eritrea is determined by the cost of animal feed. According to Mr. Temesghen, the company tries to solve this by making animal feed from byproducts that have nutritional value. The company has plans to make significant contributions to the national food security program.

Despite many false pitfalls faced by the company, Mrs. Freweini hopes to advance to modern sealing and packaging systems. In many ways, Mrs. Freweini’s life and success story best represent the spirit of a typical Eritrea woman. She was a young woman who devoted her youth and life to liberation, women’s emancipation, and social transformation. Then, as a mother, she worked tirelessly to sustain her family. And as a businesswoman, she now puts two principals at the core of everything: family and society. The reason why FT products have been loved for 20 years now is not only because of their quality but their fair pricing too. Mrs. Freweini makes her product with so much care, as for her, milk production has always been about ‘family’. One key pillar in the company is gender equality and empowerment. At the milk plant, Mrs. Freweini continues to empower young women, educating and sharing valuable lessons on milk production with them.