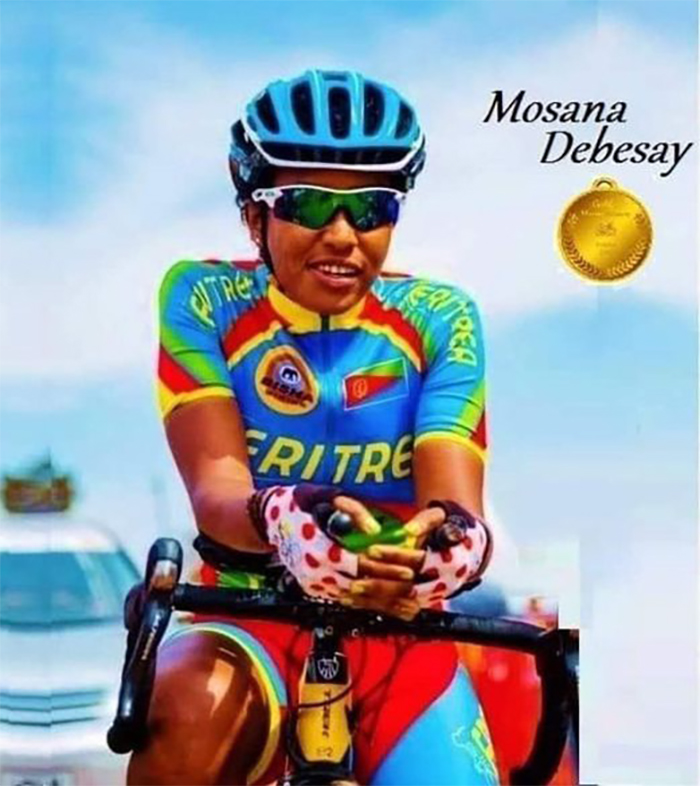 My name is Mosana Debesay. I was 14 when I first started riding a bicycle. I was in 8th grade then. One day a teacher popped into my class and announced that girls would be allowed to participate in cycling competitions. I used to participate in running races and soccer but it never worked out for me. So I took that chance and started cycling. There was another factor that pushed me to cycle. My four siblings are cyclists. Of course, my little brother started cycling after me, so my three older brothers influenced me. Whenever they won in a race and came back home with their medals, you have no idea how jealous I used to become. These feelings made me fall in love with cycling.

I remember when I was in high school I couldn’t concentrate on my schoolwork as I was busy thinking about training. I grew up training with a grassroots sports organization in Berik sub-zone. Then I officially rode the bicycle at a race organized by the cycling federation of the Central region in 2010 and finished second in the Eritrea Cycling Championship in 2011. I tested my ability in that race. In that same year, I went back to school to resume my studies which I had to quit for a while to compete at the championship. I completed a two-year course in accounting at a commercial school and went back to cycling in 2013. There were almost no teams recruiting female cyclists. However, in 2014, a team called Arag was formed and recruited female cyclists, and I became a member. I stayed with Arag until I joined the Italian team, Servetto Stradalli, in 2018. I signed with them for two years. Then I came back home from Italy in 2019 and joined Denden. In 2021, I signed with a Bike Aid professional cycling team.

The excitement I felt back then can’t really be expressed in words. Let me take you back to 2016. In 2016, I went to compete at the African Championship. For anyone won the road race, there was an opportunity to participate in the Olympics. I failed to get that opportunity. I was so mad at myself and decided to make sure to get this opportunity after four years. I made a promise to myself and said this: “I have to win in the upcoming race, if not I won’t race again in the African Championship.” I really can’t forget that day because I was really heartbroken, but it also gave me the motivation to get to where I’m now. Then in September of that year we participated at the World Championship. It was the very first time Eritrea participated with three female cyclists. The fact that we participated there motivated us and it was good enough for us as it was our first time. In 2019, I won 1st place at the African Championship held in Bahirdar, Ethiopia, which opened the gate to the Olympics. That feeling erased the sadness I felt four years before. I wouldn’t allow them to take the spot anymore. 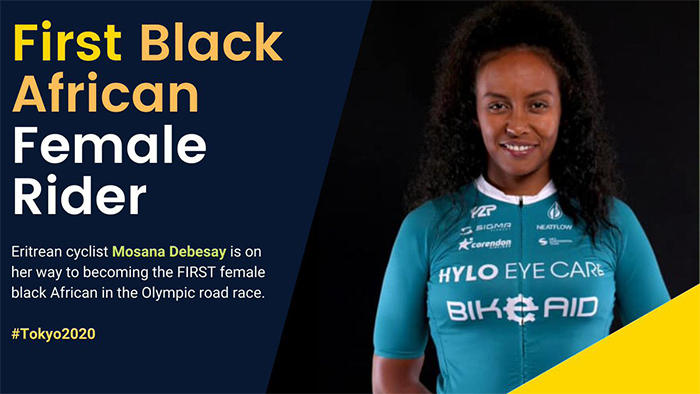 Wow. Actually, I really worked very hard and I knew this day would come one day. Now that I’ve got the opportunity I will really work hard for it. Of course, I will be very happy to win there. Until now I have been competing representing either my country or the team I’m with. However, now, I know I’m representing the whole continent of Africa and that every African is going to support me, which is filling me with excitement.

Knowing exactly what you want is by far one of the most important and powerful steps in life. So knowing what I really want and who I really want helped me a lot. As a matter of fact, my married life has never been an obstacle to my career. Of course, our tradition and life style is really not supportive to women, especially when they are sports women. You have to take care of your family and look after your kids. I did keep that in mind and figured out how to keep my career and married life side by side simply by negotiating with my partner and planning things out.

At first, when I got married no one expected me to continue cycling. The beautiful part of my life is that my husband can understand me so well. He knows what I like and what I hate. Not only that, he has always been my number one fan. Now, he is even willing to take part in cycling; he wants to be around me as a supporter or personal manager. We are a perfect match.

Well, I can’t say a lot because they have already become very competitive and ambitious, but there is one thing I don’t want to leave without saying. In cycling we all start with ambitions and we eventually start to get prizes and everything. That’s when many start to divert. Some start to feel so proud of their achievement that they don’t want to continue and strike bigger victories. They become complacent. That is not how it should be. The way we feel and think about things, including our beliefs and expectations about what is possible for us, determine everything we do and everything that happens to us. When we change the quality of our thinking, we change the quality of our life, sometimes instantly. So, they shouldn’t be stuck in the place they are. They have to strive for further and bigger achievements. That’s all I want to say to them.

This is the biggest race I have ever been to. So I will do my very best because this will be the pride for all Eritreans. I want to repay the people who have been supporting me till this very moment. My teachers who nurtured me back from 2008 till now, my parents, my people and the government. So, I will compete with all my might for these people.

Willpower is the driving force for actions that lead to success. Mosana Debesay, an Eritrean professional cyclist, has been able to get to the place she is now through her willpower. Born in 1993, Mosana started racing as a career in 2010 and last rode for the UCI Women’s team, Servetto Stradalli, in 2019. She is now going to compete at the 2020 Tokyo Olympics road race as the first female black African in the event.

The Cheat Codes to Living a long life