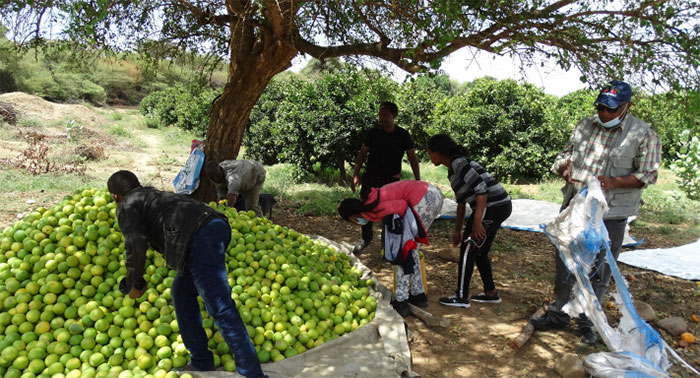 Although the yield of citrus in Eritrea is meritorious, the post-harvest management of products is not efficient. As a result a significant amount is lost during the post-harvest and marketing period. One of the ways to mitigate this problem is value addition to the products, and the MoA is working in collaboration with the United Nations’ Food and Agriculture Organization (FAO) on value addition of citrus.

The plantation of citrus fruits was introduced to Eritrea at the beginning of the 20th century with the plantation of rotondo and ovale orange varieties at small farms around Filfil, Elabered and the Durfo valley near Asmara. Subsequently other varieties were imported from Italy and planted in areas like Elabered and Mai Ayni. Sweet orange varieties are said to have been introduced to Anseba and Southern regions in the 1940’s by an Italian farmer named Denadai.

Although it can practically grow in all parts of the lowlands of Eritrea, the major citrus growing areas in Eritrea are Keren, Elabered, Filfil- Selomuna, Wina, Ghindae, Beareza, Maihabar, Alla, Mai-ayni, Logo- Anseba, Agurdet, Tesseney, Binbina, Shanbiqo and Adirosso. In 2020, there were 417 investors who grew citrus over 2,424 ha of farm, yielding an estimated i474, 040 quintals. 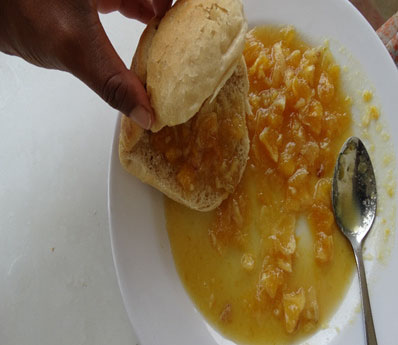 Citrus plants, which take five to six years to mature, stay for 30 years yielding approximately 50-80kg per tree in a season, and very well fertilized and maintained mature trees can yield up-to 184 kg per tree.

In the years from 1940 to 1960, citrus fruits were exported from Eritrea to Europe and Middle Eastern countries such as Saudi Arabia and Yemen. This came to a halt during the war for Eritrea’s independence due to the destruction of citrus orchards and the disruption of market chains. After Eritrea’s independence, however, to revamp the plantation of citrus fruits, the resistant varieties of root stocks and scions were imported from South Africa with the collaboration of the Ministry of Agriculture (MoA) and were distributed to farmers. The varieties of rotondo, taroki navel and sour orange mandarin are the most widely available varieties at this time.

The value addition on citrus is being conducted in Southern and Northern Red Sea regions, especially in Alla, Dekemhare, Mai-Aini, Ghindae and Beareza, areas where citrus fruits grow in abundance. The project mainly aims at giving training, which includes both theoretical and practical sessions, to the growers focusing on citrus product development.

Mrs. Harena Kibrom, the national coordinator of Citrus Value Addition project, said the training focused on making marmalades and juices using all the citrus varieties the farmers grow. The results of a study on consumer preferences focusing on marmalades and juices have been encouraging. So far 40 women and 32 men, including farmers, staff of MoA and members of Women’s association, have been trained. Mrs. Harena added that the trainees suggested that since the knowledge of the citrus growers about value addition is limited, it would be helpful to address issues regarding preservatives, storage and marketing.

Mrs. Harena noted that to further build the capacity of farmers, training on how to increase production in horticulture, generally, and how to add value on every product is necessary. Food processing machines that help in adding value to citrus fruits are being imported by the MoA. Mrs. Harena added that in the future when they aspire to carry out programs like these, the market information system should be designed for long period of time so that farmers or investors could be encouraged to engage in value addition of their products.

Mrs. Harena finally said that the experiences gained from the training will be applied to upgrade the capacity of young professionals, staff members of MoA and farmers who grow citrus fruits across the country. Those who benefited from the training are expected to share their knowledge with other farmers.