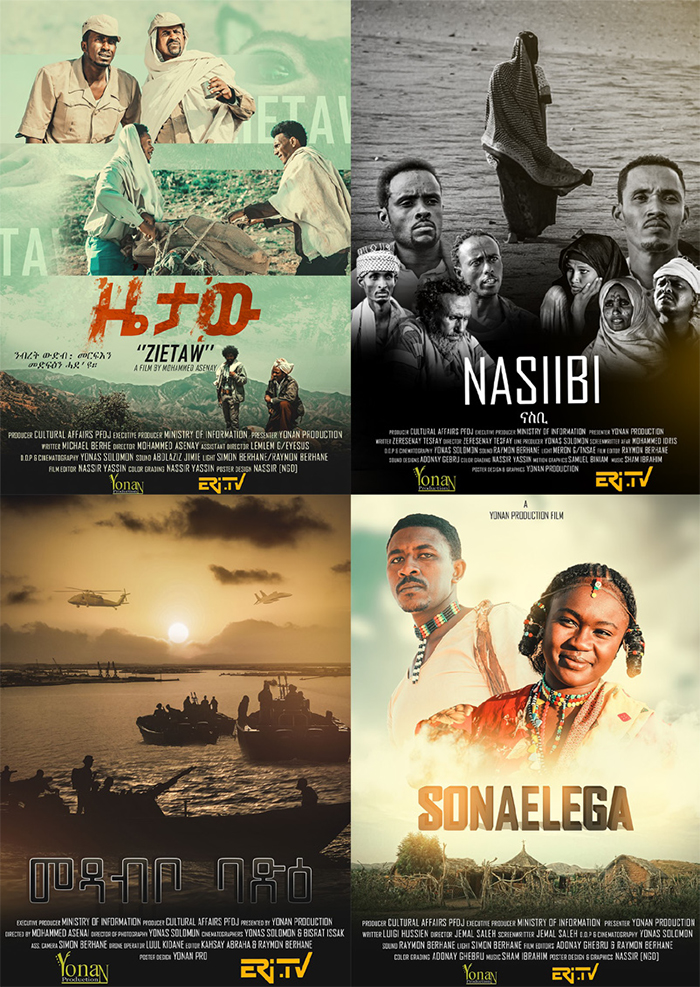 I walked in and found myself in a big compound. I moved my head left and right to check out what was around. I saw an open area covered in a green tent with chairs and a table inside the compound. Standing in front of the door that takes you to the rooms, I checked out the poster in front of me that had this inscription: “unbounding the boundaries.” The slogan made me wonder and pulled me to make my entrance through the door to find out the meaning behind it. I took steps to the nearest office that I found on the right side of the door. I met Yonas Solomon, the founder of Yonan Production Company.

We chatted and while Yonas was giving me a briefing about the company, something grabbed my attention and diverted my mind and my ears away from listening to him. There were young people coming in and out of the company carrying bags. They were young and make you wonder exactly what they were doing in there. Yonas noticed what I was thinking and brought some of those young people who are probably in their 20s and introduced them to me as the engine of the company. I found my angle and conducted an interview with them. Before we proceed to the interview, let me briefly introduce you to the company.

Yonan Production Company traces its history back to 2003 but was officially established as a private production company in 2006. It started with limited equipment mainly dominated by manpower. Today it has 25 employees and is operating using the latest audio-visual equipment which has made the company’s work easier than ever. For the last 15 years, it has produced more than 500 music videos of established and new singers, 20 commercials and promotional films for private and public organizations, more than 60 feature films, 100 sound recordings, and more than 20 documentaries, some of which have won big awards. “Anti brhan ayney,” a music video featuring Ghirmay Andom and Millen Hailu, received the East African music award in 2009, “Solomon,” a movie, received the Remy award in 2016, “Teref,” a short film, received the local Shamot awards in 2018, “Zey sger dob,” a movie also won the local Shamot awards in 2019. Now let me introduce you to some young people who are acting as the backbone of the company.

My name is Nassir Yassin and I’m the technical manager at the company. I’ve worked for four years at this company. I came with a dream to be someone different. I had an interest in arts, graphics to be specific. So I felt like this is the playground to lay down all my cards and show my inner talents. I found this place and the people in it very friendly and cooperative, which eased my nervousness as a beginner. Their friendliness alone was good enough as a reason to make me stay. Those people helped me to fill my gaps and progress in the field. I started my career by taking lessons for eight months without paying fees. Then the movie, “Georgio,” became the first project I worked on.

My name is Milka Yohannes and I’m working as an editor. I came to this house in 2017. I had limited experience with editing and arts in general. Looking back to 2017, I was a different person who lacks a lot of things. However, throughout the past four years, my friends here have given me hope and courage and supported me by correcting my mistakes. Just like the way you sow a seed and you look after it by watering it to make it fruitful, this place played a huge role in making me the Milka I’m today.

My name is Nahom Berhane and I’m a corporate manager in the company. I have got a background which is a bit different from that of my colleagues. I used to work as a cameraman and had experience with other producers. When I first came to work for Yonan Production, I never knew I had a side that would make me unique in my own way. What I mean is I was simply engaged with artistic works without realizing my specialty. However, Yonan Production has turned me into a whole new person. I started from the bottom and took the eight monthly lessons and now I’m here working as the corporate manager. Of course, Yonas mostly played the role of making me so. Another thing that made me feel comfortable about this place was that I never felt like I was in my workplace. The working environment, the people, and Yonas were so nice to make me feel at home.

Nassir— for me, this place is the hub of creativity and enlightenment. You just need to have ambition in the artistic work and this company simply helps you bring out your inner talents. It might seem an exaggeration if I say this place is a place where you realize exactly what your dreams are.

Nahom—it is unique as it has made us into one person despite our different personalities and backgrounds. I have my own way of handling things but when it comes to working, we work as a team and we rhyme perfectly as if we read one another’s minds. In simple words, it is a unique place that has turned us into one big pier which eventually became its backbone.

Milka— Wow, I don’t think I will finish by using few words. If I say he is a mentor, it would make our relationship look like that of a teacher and a student. However, that is not it. Yonas is not only a mentor but a teacher of life. I’m a girl and one day I will face the reality of life, which is marriage, and will find myself being a mother one day. He even gives me advice on how to tackle those things that might seem hard now. Not only did he talk to us about work but he has always been there in our good and bad times to support us and advise us on what’s best for us. As our model, he is the most respected mentor for me. 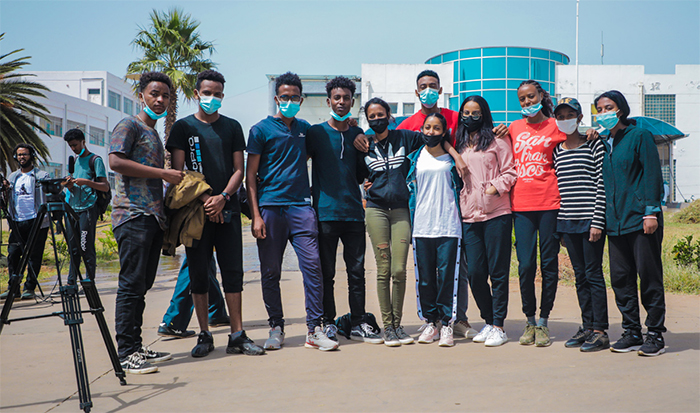 Nahom—Yonas? I would say he is like my big brother. Like a big brother who takes the responsibility to guide his small brother, Yonas has always been that kind of person in my life. He brought me from a rough and smoothened me throughout the years as if it’s his duty to do so. I’m so grateful for that and wish to show him what he made out of me in the near future.

Nassir— a teacher? No. a father? No. just like what Nahom said, he is also like a big brother who paddled beside me to get to where I’m now. I would love to call him my father. However, in our culture a son is supposed to always obey the father. That is not the case with our relationship with Yonas. So I prefer to call him my big brother with whom I could share everything.

Nahom—Until recent years we were working in few areas without discovering other parts of the country. An idea of exploring things that come from our identity, culture, and life came up. We simply started to think out of the box. So trying to explore beyond the boundaries we had is what our motto represents. As our motto says we started to work with different cultural films that became very influential not only in our country but also in the neighboring countries, such as Ethiopia and Djibouti. For instance; “Sonaelega” and “Nasiibi,” which are Kunama and Afar movies respectively, are the first of their kind in their nature and language. The film “Nasiibi” became the most-watched film and left its impressions not only on the Afar people living in Eritrea but also on those in Ethiopia and Djibouti.

Nassir— to sum up, this place has cultivated many young Eritrean artists who are capable of turning a new leaf. You come with nothing and leave with everything, but yet you can’t leave for good as if you are under spell. We do everything together. Once we had to paint the company, we didn’t look for someone who would do that for us. We painted it together. We hang out in the outdoors that you saw with a green tent. This is where our love begins. Trust me, it is very rare to see a company with its employees living the same lifestyle, hanging out together even on Sundays, and most caring endlessly for one another. The values of this company are teamwork and respect which are helping us walk at one pace. Another thing is that in 2003, this company started with children’s programs. Now we are bringing those programs in a different manner using 3-D.

Preconception Care Opening the Way to a Healthy Society