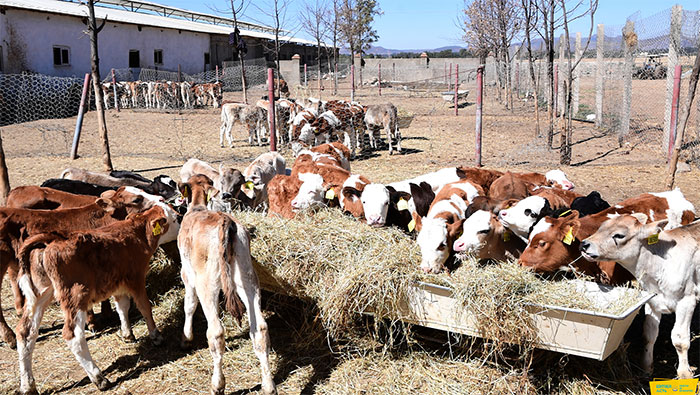 The journey Eritrea traveled so far in the construction of strategic dams, in addition to introduction and expansion of advanced irrigation systems across the country, is part and parcel of the development endeavors in which the GoE made huge financial and human resource investment to ensure food security as well as to improve the living standards of all nationals. Farm areas across the country have been making notable contribution in ensuring supply of fruits and vegetables in all seasons.

The Halhale Agricultural Dairy Farm is another big project that has started to flourish in a bid to contribute to the supply of dairy and dairy products, including the supply of meet. The project was initiated following an intensive research activity carried out before designated as a center for dairy farm. The site is 30 km south of Asmara, the Capital, and its climatic condition is highly favorable for livestock ranching. Its proximity to Asmara gives the farm an easy access to the market, while the power supply it gets from the Asmara-Mendefera main line is another advantage that minimizes cost. However, the project’s main strategic advantage is that the farm is surrounded by the Mslam and Logo Dams.

A pilot dairy farm project was initiated in the late 2017 with the importation of a total of 660 cattle, of which the nine were bulls. The number of the cattle was redoubled in a short period of time because most of the imported cows were with calf.

Yet, the human resource capacity was in short when the project was piloted but gradually expanded and developed with an increase in the number of experts over the last five years. At this time, each block is managed with Veterinary and Animal Science gradates at certificate, diploma and degree levels who are very busy 24/7 working in shifts in different sections of dairy cows, calves as well as agronomy.

The farm was expanded to cover about 570 hectares, of which the 23 hectares are for infrastructural development while the rest is for the cultivation of green animal feed. For the time being, the farm has been collecting animal feed from different farm areas administered under the Eritrean Crops Livestock and Corporation mostly from Gash- Barka and Southern regions.

Mr. Tekle Legese, Manager of Dairy and Dairy Products Development at Halhale Agricultural Dairy Farm, said that the dairy products from Halhale have contributed to the reduction of milk price by half but the envisaged goal of meeting the needed demand has not yet been materialized.

The project was initiated targeting various objectives that are aimed at introducing advanced diary processing system to the country, supplying quality and cost effective products and exporting dairy and dairy products to foreign markets and above all enabling young graduates from different colleges hone their skills through hands-on practices at the center.

What has been achieved so far is commendable which can be seen from the introduced modern milking machines that have a capacity of milking 60 cows at the same time, which in turn is expected to ease challenges of milking and creating comfort and bringing about much productivity.

The milking machine is very advanced and is managed with chips and transponders which helps in uniquely identifying cows that are in heat, that are sick and thus under veterinary treatment as well as in testing viscidity of milk and above all unregistered cows would not be milked by the machine. The collected milk is automatically tested for its quality and goes to the processing machine.

According to Mr. Tekle, the dairy cows imported from Germany are known for their high quality milk. In addition to the supply of milk, the dairy farm project has also been sending fat bulls to the butchery in a bid to ensure supply of meat. The dairy farm set its objectives to finally keep 10,000 dairy cows but there has been equal number of new born male and female calves which has delayed reaching the targeted goal a bit more.

Accordingly, the Halhale Agricultural Dairy Farm at the time has 3000 cows, while the infrastructural capacity has been expanded to accommodate more and more dairy cows. The center has also been empowered with human resource and is now ready to be expanded to other areas of the country as more and more graduates have gained the required technical know-how that enables them to run similar projects independently.

The manure of the dairy cows is daily collected and used as compost to give additional fertility to the animal feed farms in Halhale and Adi-halo as well as Adi-Guadad. 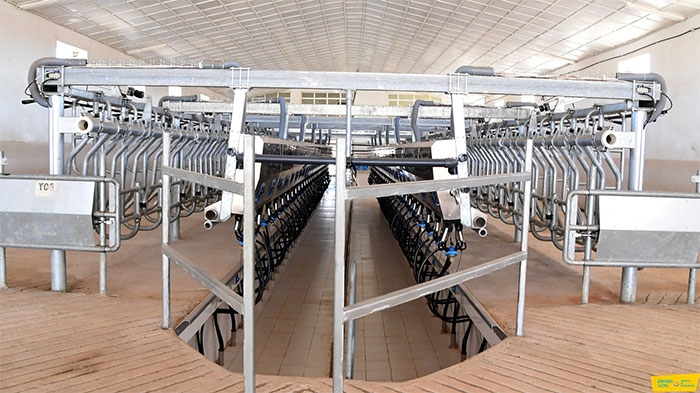 The farm is in a good status and its way forward is ensured with the provision of material, technical and infrastructural developments that have been steadily implemented within the five years of its commencement. Mr. Tekle indicated that the Center is now looking ahead to redouble production and the farmers in the environs of Halhale have been assisted with improved bull species as part of the effort being made to involve communities in bringing sustainable supply of meat and dairy products in the local markets.

The investment being made in this project serves as a viable training college for young graduates and what is more is the experience that has been gained to date. It is a stepping stone to achieve the envisaged goal of ensuring food security. The future of the center is highly prospective and the young graduates are very committed to running all activities of animal husbandry, veterinary services and production of animal feed.