In the 21st century when food production remains a challenge and a cause of malnutrition, conflicts, migration, and other problems to many countries in the world, the Government of Eritrea gives food security top priority in its macro-economic policy. And the critical need for increasing food production is through employing mechanized farming.

More than 60 percent of the Eritrean population engages in agriculture and its allied fields for income and employment. Therefore, since most people earn their living from agriculture, improving the economics of agriculture is the way to development and poverty reduction.

Insufficient food production in Sub-Saharan Africa induced by environmental and policy failures is making them depend on food imports or food assistance, which cripples their economy and productivity. Unable to feed their own people they are being immersed in a vicious circle of debt often failing to assert themselves in the international arena despite their immense resources. But the people and Government of Eritrea took food self-sufficiency as one of the top priorities and have long sought to free themselves from food insecurity by upholding the principle of self-reliance and wise use of natural resources.

The primary goal of Eritrea is to guarantee food security by introducing modern technology, irrigation, terracing, and soil and water conservation, instead of depending solely on rain-fed agriculture.

Modern and commercial agriculture was introduced in Eritrea by the Italians. During the subsequent colonial administrations the agricultural sector was ignored and what was left of the Italian investors was largely destroyed. After Eritrea’s independence, however, commercial farming has been practiced to meet the demands of the urban population, supply local industries with raw materials, and export hard currency. There are few areas in Eritrea where integrated mechanized farming is being practiced. These include the farms of Aligidher, Hamelmalo, Afhimbol, and Elabered.

Elaborated Estate, which is operated by the Crop and Livestock Corporation, is located in the Anseba region and is about 68 km northwest of Asmara. It was established in 1893 by an Italian entrepreneur on around 12 Ha growing vegetables, tobacco, sisal, etc. It later grew into a complex agricultural area with the Italians’ intensification of industries. The farm was heavily damaged during the war for independence and was rebuilt in 1998.

Since Eritrea’s independence, the estate has followed a dual approach to agricultural development. They are the “improvement” and “transformation” approaches. The improvement method is meant to bring gradual improvement in farming methods at the estate. The transformation approach aimed at rapid increase in production through modern methods. The estate has two divisions: cultivation and livestock.

Captain Hagos Meles, manager of the Elabered Estate, said that one of the major attractions of the Estate is that it uses the Anseba River as its main source of water through diversion systems and other mechanisms which make the production cost low. The estate utilizes a mechanized type of farming which are watered from a chain of dams.

The estate covers a total of about 1,200 ha, of which 350 ha is under cultivation, 22 ha is presently occupied by ponds, dams and canals, while the remaining 570 ha is primarily steep, covered with trees and other plants. Of the 300 ha of arable land about 84 ha is covered with perennial crops while 86 ha is mainly covered with vegetables and fodder crops. Portions of the remaining irrigable land have recently been developed while the rest are unutilized primarily for the sake of crop rotation and future expansion of fruit and vegetable farms. Out of the 570 ha, about 100 ha is covered with grass during the rainy season.

Mr. Hagos said the estate has five sections: vegetables, fruits, crop disease prevention, livestock, and dairy products and animal food branches. Products of the estate such as fruits, vegetables and dairy products are daily transported to Asmara to help meet the needs of customers in the capital city. The milk processing plant at the estate produces milk and other dairy products which are sold locally in Elabered, Asmara, and Keren at a fair price. The tomato processing plant at the estate, which is being renovated, is expected to use as its main input tomatoes grown around Elabered. 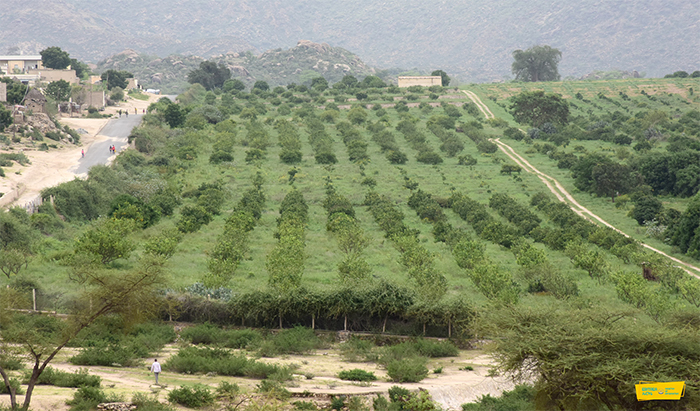 At the estate, they are growing vegetables, orange, coffee, olive, lemon, papaya, mango, guava, and avocado as well as animal feed such as Alpha-Alpha, Columbus, and cereals. The estate is currently working with a focus on livestock reproduction. It is raising 900 pigs, 300 cows (around 200 Holstein, 100 Barka), and 86 sheep. The byproducts of these animals are used in the estate as fertilizers, helping the estate reduce the cost of production by recycling existing resources.

The development of agriculture cannot be carried forward without paying attention to markets. The main goal of the Elabered Estate complex is to stabilize the market prices of agricultural products such as vegetables, fruits, and dairy products. For this reason, it supplies fresh products to markets around the estate and Asmara all year round. The estate works in cooperation with agricultural institutions in the country, whose graduates are the main actors at the estate.

The agricultural research institutions and testing centers were either renovated or re-established following Eritrea’s independence to work closely with farmers and relevant organizations. They include the Ministry of Agriculture, Hamelmalo Agricultural College, and the National Agricultural Research Institute of Halhale which are playing a vital role in the development of agriculture. To increase productivity, the Government has established seed banks, research stations and laboratories and contacts with international research institutions. In order to increase their knowledge of entrepreneurship and farm management, farmers nationwide are given vocational training periodically.

The beneficiaries from the Elabered Estate are the farmers and other staff alike. The estate creates and facilitates new business and employment opportunities for hundreds of the local communities who live around Elabered.

To enhance its production capacity, the Elabered Estate is equipped with horticulture and animal science specialists who graduated from Hamelmalo Agricultural College. There are 37 specialists in animal and veterinary science currently working at the estate.

The agro-food sector of the estate offers significant potential for expansion. Vegetables can be grown all year round, with four harvests of lettuce and 12-14 cuts of Alfa- Alfa per year. The introduction of modern irrigation technology such as the drip and sprinkler and farm mechanization would enable the estate to save water and intensify its production, which the estate is working to obtain.