Every Thing You Can Imagine is Real 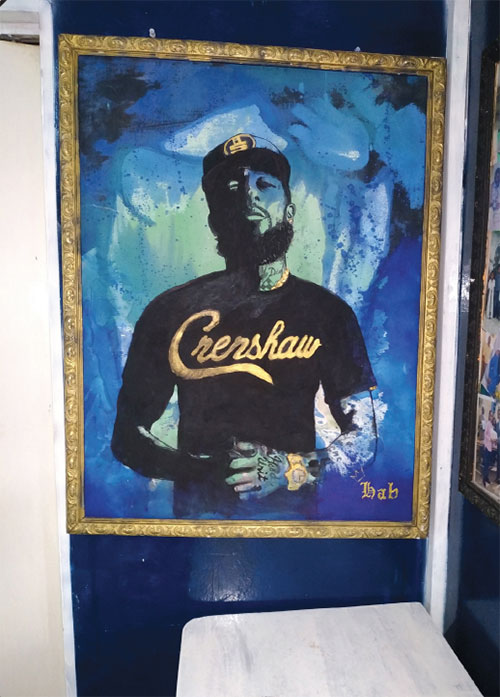 People who accomplish anything worthwhile in life begin with a big dream or a vision of what is possible. They rise above their current surroundings, their existing limitations and problems, and imagine themselves living the kind of life they would like to live in the future. Habtom’s passion and determination allowed him to achieve a lot of spectacular works. As a self-taught person, he does one thing and then looks to do other things. His passion and the will to achieve bigger things can be a motivation. He is striking for three things at a time. 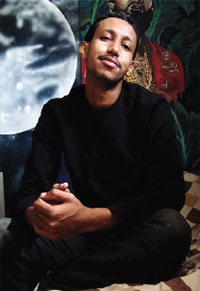 My name is Habtom Tekle. I’m 28 years old. I have always en­joyed playing with colors as a kid and for some reason that thing became a hobby and eventually turned out to be part of my life. Then I took it seriously as a ca­reer.

I started painting when I was seven. Just like any kid I used to love animation, especially spider man, a lot. I used to watch the movie and I started to think how about I draw him and put him be­side me. All this began because I was so much in love with that character. So I started to draw the spider man with a pencil. It turned out to be good. Later on, when I turned 11, I had the courage to draw on the black board standing in front of my classmates. I drew a horse with shadows. My teacher saw it and was really surprised. He praised me for that which was a good thing for me. Then a few days later my homeroom teacher asked my dad to come to school. While discussing my grades and my overall performance at school, my teacher talked about the picture and told my dad that he had to motivate me. The very next day my dad bought me a toolkit for drawing. That boosted my morale. Later on I took a four-month course and participated in a competition where I stood 3rd. I made progress through practice. That is how I started painting and I’m still working on it.

I started interior designing when I laid my hands on the tool called compressor. It is quite dif­ferent from any other drawing brushes. That specific tool brings life to my paints.

I started it when we were in lockdown due to covid-19. I read a book and watched mov­ies and was quite bored. Then I was lying down on my bed and looked around my room which I found to be quite simple. An idea popped in to my head and I said, “Why don’t I paint something and make it look quite unique?” When I picked up my brush and started painting, I found myself painting Nipsey Hussle. It was some art and through that I dis­covered something about myself — that I can paint on walls too. So I started to think out of the box and tried to combine brush painting with compressor. When I finished painting the picture, I was really surprised at myself. I was very much encouraged and motivated. Then I started to paint another thing on the other side of the house. As a kid I always wanted to be an astronaut and was very curious about the outer space. I used to ask myself how it would have been had I got the chance to travel to space as an astronaut. That’s when I started to draw on the wall the unknown astronaut who has always been on my mind. I added some stars on the wall with some glows and painted the rest of the wall with color. When I finished painting, I turned off the lights and, liter­ally speaking, felt like I was out of the earth. ‘What a sight!’ were the first few words I uttered. I felt as if I fulfilled my childhood dream. After that work I was able to produce my best work, a pic­ture of Henry the soccer player, with a compressor. Then I started painting with both brushes and compressor which made my work unique.

My base was Yonan Produc­tion. They called me in to work with them and that paved a way for me. At first, my job was sim­ply to sketch the characters and draw them. There are steps to make a cartoon character and an animation. It all starts with sketching. Then illustrations and you give them the characters. Fi­nally you edit the whole scene. As an artist I love animations. So I was curious and eager to know what the process behind making animations was. I took one step forward to illustration. Finally I started to draw it, illustrate and give them character myself. Hon­estly, it gets harder when you start to up­grade. However, if you love what you are doing you really enjoy no matter how diffi­cult it is. That is how I got into animation. 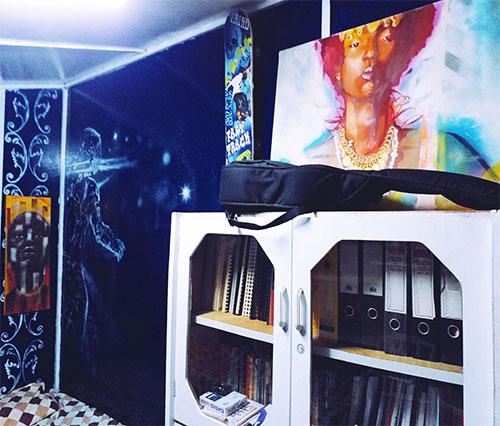 Regarding the interior design, I’m thinking about forming a tea — some of them do the designs for the curtains, some the lights and bulbs and I paint on the wall. I can do it all but two hands are better than one. Having someone who can help you is really im­portant as it conserves time and energy. As for the animation, I’m thinking about producing more and more, especially if I can get someone who would help me fi­nancially. It is quite demanding financially. Now I’m working on an animation video clip. It will soon be released. About painting? I will do some sort of exhibition to introduce my works to people. There is a quote that I really like. “Everything you can imagine is real.” I am living in what I have imagined once.