In Eritrea, formal veterinary services date back to 1902. The Italian administration in Eritrea established a technical commission to study and resolve problems created by rinderpest. As per the recommendations of the commission, a specialized institute was established in 1903 to study and develop prophylactic and curative treatments, as well as to implement control measures. (The old building of the specialized veterinary institute still stands at the Villagio area of Asmara.) Despite these promising beginnings, many of the early gains in the veterinary services and livestock development were lost due to political unrest and extended conflict from 1952-1991.

Delivery of veterinary services in the post-independence years

Mr. Ghebreamlak Aregay is a senior radio journalist at the Ministry of Information. In 1996,

he interviewed Mr. Kifle Adal, a livestock herd owner in the Gash Barka Region, Molki sub-zone. In the interview, Mr. Kifle explained, “I had around 600 cattle before independence. At that time, I went to the Tigray region in northern Ethiopia, to vaccinate my herd against rinderpest. However, I couldn’t get any service and I returned home. Despite my best attempts to save my large herd I lost almost all of them due to rinderpest… I was left with less than 60 cattle. Right after independence, thanks to Hzbawi Gnbar (the Eritrean People’s Liberation Front), we had access to regular vaccination programs. Now, I own more than 500 healthy cattle.”

This brief story illustrates how veterinary services in Eritrea quickly began to recover shortly after independence.

According to Dr. Yonas Weldu, director of the Animal and Plant Health Division in the Ministry of Agriculture (MoA), and Chief Veterinary Officer (CVO) in Eritrea, during the past 30 years the MoA has strengthened its organizational capacity and delivered quality veterinary services to farmers and pastoralists across the country.

During the early years of independence, the challenges were mitigated at field level through the assignment of graduates and para-professionals to field positions. Besides, the government and some development partners developed initiatives to improve veterinary services.

Over the past three decades, the progress of the veterinary services has been commendable. Dr. Yonas detailed how a considerable number of training courses for para-veterinarians were conducted while many veterinary clinics and other infrastructure were established in all sub-regions throughout the country. Importantly, veterinary service providers, to a large extent, are able to access adequate equipment, vaccines, and drugs to perform clinical services.

Currently, there are around 70 veterinary centers in the country. Veterinary experts with different levels of experience and expertise diagnose and treat infectious and parasitic diseases, as well as vaccinate animals. 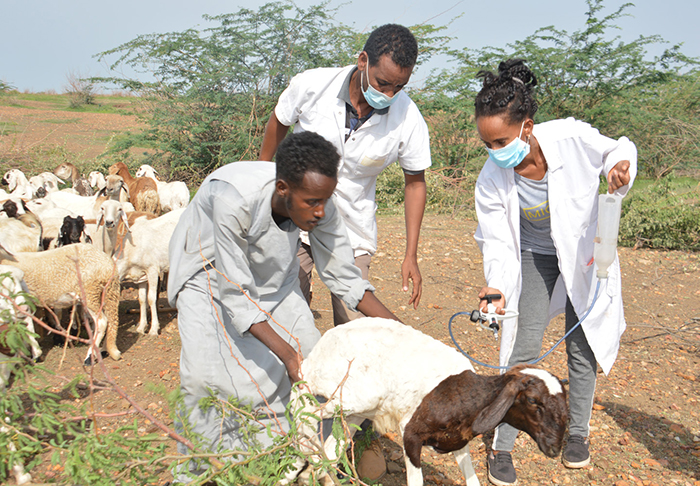 Until 1991, many serious animal diseases were common in the country. To reduce their incidence and spread, the MoA has developed emergency preparedness plans for rinderpest and highly pathogenic avian influenza, control plans for brucellosis, tuberculosis, foot and mouth disease, lumpy skin disease, sheep- and goat-pox, and control and eradication plans for peste des petits ruminants (PPR) and rabies in dogs.

Dr. Yonas further elaborated that disease prevention, control, and eradication are carried out through compulsory vaccination programs and the provision of clinical services. It is worth noting that vaccination coverage in Eritrea is commendable and international development partners, including the Food and Agriculture Organization (FAO), have described the country’s vaccination program as comprehensive, quick, and effective. Since the beginning of the compulsory vaccination program (which is also free) in 2003, around 2.5 million livestock have been annually vaccinated for major animal diseases. Overall, during the past three decades, more than 53 million livestock have been vaccinated against major livestock diseases. Furthermore, since 1991, numerous therapeutic treatments for internal and external parasites have been conducted, with greater than 105 million livestock being treated.
Finally, Dr. Yonas noted that, to date, the prevalence of major animal diseases has been reduced by over 50 percent, with large-scale outbreaks of epidemic proportions no longer occurring. Generally, outbreaks have been sporadic and limited in scale.

Generally, by the end of August 2021, more than 2.1 million sheep and goats have been vaccinated against PPR throughout the country.

Between 1991 and 1997, a rinderpest mass vaccination campaign was carried out and the disease was put under control. During the course of those years, more than 500,000 cattle were vaccinated annually across the country. In 1998, mass vaccinations were put on hold in order to identify the presence of remnants of rinderpest in cattle and to reduce confusion when blood tests were conducted (since vaccinated cattle produce exactly the same serological reactions as infected animals).

This was a tremendous achievement for Eritrea with regard to livestock development and has laid the basis for control and eradication of other major diseases. 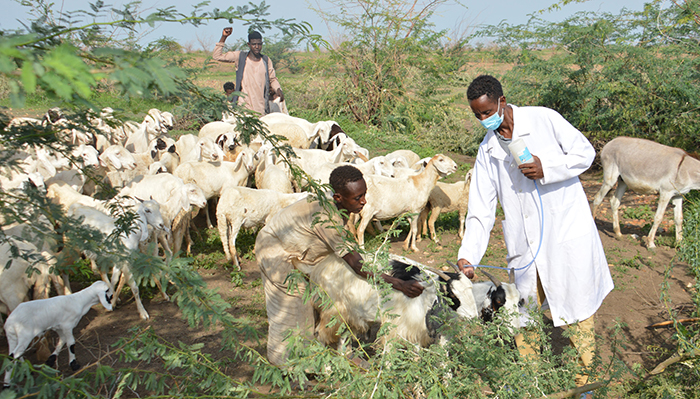 PPR is a highly contagious viral animal disease affecting all small ruminants. Once introduced, the virus can infect up to 90 percent of a flock and the disease can kill anywhere between 30 to 70 percent of infected animals.

PPR was first observed in Eritrea in late 1993 when outbreaks occurred in sheep and goats around Tsorona, located in the Southern Region.

Between 2015 and 2018 mass vaccination campaigns against PPR were carried out in all regions of the country. Consequently, geographic distribution and incidence level of the disease was considerably reduced.

The MoA, in collaboration with the FAO, is conducting a comprehensive PPR vaccination program to eradicate the disease before the globally set deadline of 2030.

The MoA’s Public Relations Division visited some regions of the country to collect public opinions about how the vaccination programs to eradicate PPR are helping communities.

This region is the major hub of livestock production in Eritrea. The government has invested greatly to boost animal health and production.

Ms. Shashey Mesfin, a veterinary officer at the Barentu Animal Clinic, explained that the clinic conducts disease diagnosis and regular annual vaccination campaigns against various diseases, including brucellosis, PPR, and rabies, among others. It is to be noted that in the past two months, the vaccination campaign (mainly targeting PPR) in the region has reached 893,200 livestock.

Mr. Kerar Osman, who lives in Haykota, is engaged in the cultivation of crops and rearing of animals. Through the vaccination campaign, 500 of his small ruminants were vaccinated against PPR all free of charge. “I have vaccinated my livestock for the last two years,” he noted and adds, “Thanks to the vaccination programs, I have increased the number of animals in my herd.”

Mr. Michael Tesfaslasie, Unit Head of Animal Health in Anseba Region, explained that the region possesses favorable conditions for livestock production. It is estimated that around 500,000 livestock are in the region. Mr. Michael explained that in order to improve the health of animals in the region, several animal health clinics have been established and nearly 40 experts deliver veterinary services.

The annual vaccination program covers major animal and zoonotic diseases, including sheep-pox, lumpy skin disease, PPR, and rabies, among others. As of mid- August 2021, free and compulsory vaccinations against PPR and rabies were provided to around 324,200 small ruminants and 4,000 dogs.

Mr. Gebru Hamde, a farmer living in Megarh, Keren sub-zone, explained, “We get annual vaccination services from the MoA for our livestock. This month, I was able to vaccinate 33 of my goats, along with 2 dogs. Thanks to our government and its commitment to animal vaccination, our livestock are now healthy. Most importantly, the mortality rate has greatly reduced and the size of our herds has grown.”

Mr. Mahmud Omer, also an inhabitant of Megarh, cultivates various crops, including millet, sorghum, and groundnut. Like many others in the region, he also rears animals. He described the support from the MoA, explaining, “We get proper clinic services and vaccination from the animal health clinic around us.

For instance, I am able to vaccinate 20 small ruminants and one dog. Unfortunately, I have noticed there are still some farmers who do not fully understand the importance of the vaccination programs. I urge all farmers to vaccinate their livestock in order to prevent and eradicate animal diseases.” He also encouraged the MoA to conduct more awareness raising campaigns to promote public understanding of the importance of the vaccination programs.

This region has diverse climatic and geographic conditions, as well as two rainy seasons. Animal grazing through nomadism is a common agricultural practice.

According to Mr. Mohammed Ahmed, a veterinary officer in the sub-zone of Ghindae, the animal health unit provides clinical and vaccination services and also conducts disease surveillance on a regular basis. Moreover, the unit also focuses on raising public awareness of zoonotic diseases. Mr. Mohammed explained that Ghindae has suitable climatic conditions for rearing animals. For this reason, many small ruminants migrate to this area from the Southern, Anseba, and other regions. This free movement of animals makes vaccination programs in the area very challenging. In the past month, around 49,000 small ruminants have been vaccinated against PPR in Gindae Sub-region. Had it been in the favorable season, the number would have likely been much larger, he added.

Mr. Osman Ali is a farmer living in Adi Roso, Ghindae sub-zone. He is one of the beneficiaries of the free and compulsory vaccination programs. He mentioned that his 40 sheep and goats received the PPR vaccine and underscored that the program is very important to the community as their livelihoods depend on rearing animals.

Ms. Nasra Ahmedin, a farmer, came from Agombosa area to have her livestock vaccinated. She stressed the importance of the vaccination program to ensuring healthy herds. She recommended that the MoA schedule the vaccination campaign in the period February to March so that all livestock in the region could be vaccinated.

Generally, 422,200 sheep and goats have been vaccinated in the Northern Red Sea Region.

Mr. Habtemiariam Abraham, Unit Head of Animal Health in Southern Red Sea Region, explained that animal clinics in this region actively provide diagnostic services for various diseases as well as regular vaccination programs against major diseases. He briefed that, “Starting from mid July, a free and compulsory vaccination against PPR was conducted for around 70,000 sheep and goats. Awareness raising campaigns focusing on the importance of PPR vaccination and its ways of eradication were held in all stations during the vaccination programs. As a result, the vaccination program was very successful.”

Mr. Ahmed Redo lives in a village of Mebrah, Sub region of Central of Denkalia. He explained that their lives mainly depend on livestock rearing and their village has a large number of livestock. He further noted that many pastoralists come from different villages for their area possesses favorable environment for livestock grazing. Referring to the vaccination program, which was concluded in the past month, Mr. Ahmed Redo said, “I really comment our government for providing us free vaccination services. Especially, we are very pleased with the free vaccination of our sheep and goats against PPR. In addition, I would like to remind the Ministry of Agriculture to reinforce and continue the treatment programs against internal and external parasites”

The Diverse Biodiversity of Eritrea is a National Treasure