The Diverse Biodiversity of Eritrea is a National Treasure 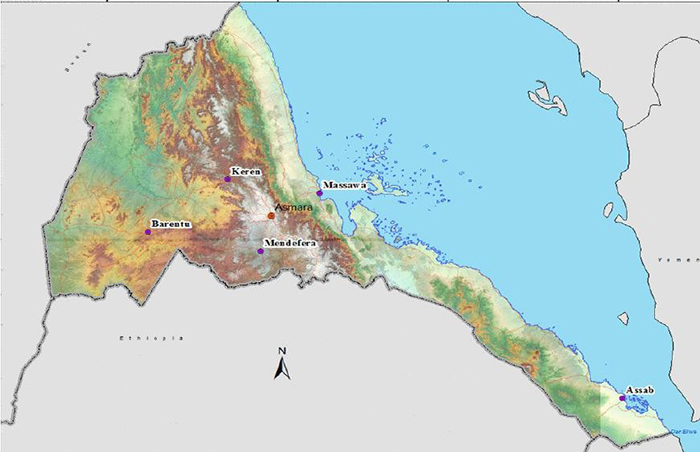 Large animals like the elephant, African wild ass, leopard, and ostrich are recognized as important animals that are well known to Eritreans. Small animals are also part of the biodiversity of Eritrea and most people are not aware that some of these small animals were first described scientifically from Eritrea as long ago as the 1830s. Several species are found nowhere in the world except Eritrea and are thus “National Treasures” that must be protected, studied, and appreciated.

The Ministry of Agriculture, the Ministry of Marine Resources, the Ministry of Water, Land, and Environment and other governmental organizations continue to conduct wildlife surveys in each of Eritrea’s six Zobas so that all Eritrean wildlife can be identified and protected from potentially harmful human activities.

In December 2019 the 6th National Report to the Convention on Biological Diversity was issued by Ministry of Water, Land and Environment. 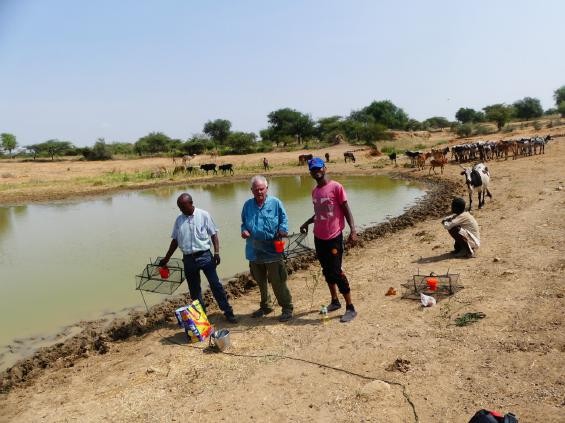 Since Eritrea’s independence, conservation, environmental protection, and respect for wildlife have been national policies.

Eritrea does not allow hunting or logging of natural forests. The Ministry of Energy and Mines requires environmental impact studies before mines are allowed to operate. The Bisha Mine in Gash-Barka
Zoba and the Zara Mine Anseba Zoba have on site environmental staff to ensure wildlife protection
Here are photos of four species of amphibians and reptiles that were first scientifically described from
Eritrea. 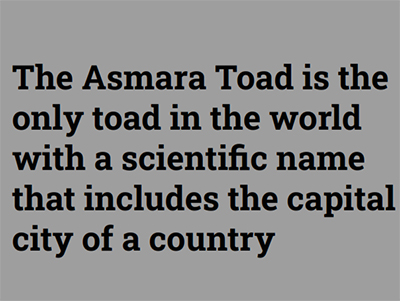 The Asmara Toad is the only toad in the world with a scientific name that includes the capital city of a country. These toads were first described in 1982 from a pond on the edge of Asmara. They are a common species that is found at many places in the Eritrean and Ethiopian highlands. Toads are very
beneficial to farmers because they eat insect pests including locusts.

The Eritrea Clawed Frog was described in 1898. The species is named after Paolo Clivio, an Italian veterinary surgeon. He collected some specimens at Segeneiti and Adi-Keih and sent them to Italy. They were described as a new species by a scientist at the University of Torino. There are 29 species of clawed frogs found in Africa south of the Sahara Desert. The name clawed frog refers to tiny claw-like finger and toe tip. All species are aquatic. Most people are not aware of them because they usually stay on the bottom of ponds and lakes.

The Eritrean Side-necked Turtle was described in 1835 from specimens found in a stream in the hills west of Massawa. These turtles were not found again until 2016. They were thought to be extinct. When I started collaborating with the Forestry and Wildlife Authority in 2016 we set traps baited with sardines in streams and small rivers along the road from Massawa to Asmara. We were very excited to 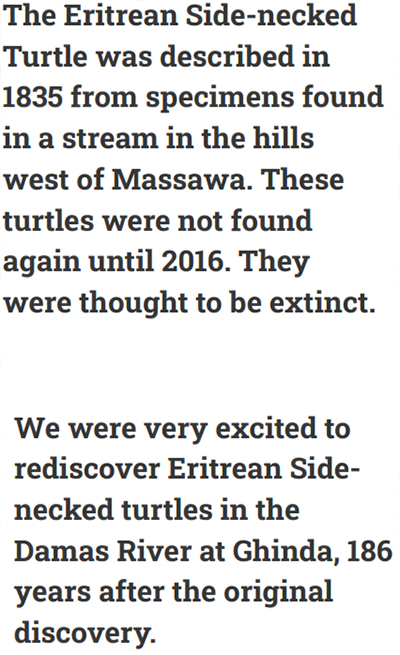 rediscover Eritrean Side-necked turtles in the Damas River at Ghinda, 186 years after the original discovery. Additional surveys have now documented these turtles in rivers and ponds in Anseba, Gash-Barka, and Northern Red Sea zobas. There are several other species of sidenecked turtles in Africa. These turtles have a long neck and when they pull their head in to the shell, they turn the neck to one side so their head can fit into the shell for protection.

The Eritrean Rock Agama was described in 1885 from specimens collected at Keren in Anseba Zoba. This species is now known to occur in other parts of the south of the Sahara Desert. Eritreans and other visitors to Eritrea can see these lizards basking in the sun on large boulders along the highway from Keren to Argodat. They are common in rocky hills across the road from Keren War Cemetery. They live in scattered colonies where a dominant male watches over several females and juvenile lizards and chases away other males lizards that may try to take control of the colony.