Commemoration of 60th Anniversary of armed struggle for independence

Asmara, 09 September 2021- Eritrean nationals in Great Britain, Australia, and New Zealand commemorated the 60th anniversary of the beginning of the armed struggle for Eritrea’s independence with patriotic zeal.

At the commemoration event the Eritrean community held in London on 4 September, Mr. Estifanos Habtemariam, Eritrean Ambassador in Great Britain and North Ireland, gave a briefing on the significance of 1 September in the history of the Eritrean people as well as on the objective situation in the homeland.

The event was featured with cultural and artistic programs as well as an exhibition depicting the heroic feat the Eritrean people demonstrated during the armed struggle for independence. 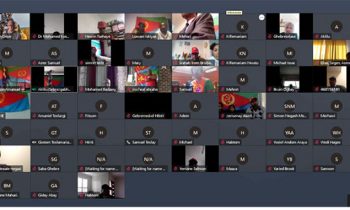 In the same vein, the Diamond Jubilee of the beginning of the armed struggle for Eritrea’s independence was commemorated in various cities of Australia and New Zealand in which nationals participated in-person and virtual formats in compliance with the guidelines in those countries to control the COVID-19 pandemic.

Mr. Mehari Tekeste, General Consul of Eritrea in Australia, gave an extensive briefing on the objective situation in the homeland and the region and called on nationals to strengthen organizational capacity and participation in the national development drives.

At the event, chairmen of Eritrean communities and national organizations, and associations delivered speeches in a virtual format focusing on the significance of the Day in the history of the Eritrean people.

Culture: A Trade-off in Public Diplomacy Activities of the Eritrean Diaspora