Culture: A Trade-off in Public Diplomacy Activities of the Eritrean Diaspora

Eritrea’s history is as old as humanity and is characterized by the convergence of old and new amenities which took shape over millennia. Embarking from these premises, I surmise around vital archaeological and/or historical records to emphasize that its visibility in the international arena can be fertile ground to foster understanding and respect. Central to the conception of public/cultural diplomacy, or whatever semantic features are attached to it, and I strongly feel that platforms can be forged to effect inter-cultural dialogue around themes of Eritrea’s archaeological heritage. In this respect, I provide a sketch to touch upon elements of the country’s bounties to the extent that their resonance in the spectrum of public diplomacy will help us explore ways of interaction than perhaps often resorting to orthodox avenues of diplomacy.

Located at the juncture of the so-called “Afar triangle,” Eritrea’s Danakil Depression is one of the world’s fossil gold mines. Eritrea’s map in the growing spectra of paleontological and paleoanthropological ventures across the globe has been delimited thanks to the discovery of a million-year-old hominid remains and the mammalian fossil record (picture on the following page). This research has attracted international scientists to the fore. The integration of the state-of-the-art in these research projects will broaden our knowledge of human and mammalian evolution in the context of African and Euro-Asian parallels.

Themes around common human ancestry, ecological and climatic challenges, and resource exploitation strategies amid these barriers are explored from different points of view, and further help instill knowledge on multi-culturalism, peaceful coexistence, and global responses to human challenges and catastrophes.

Efforts are harnessed towards integrating these into school curricula and disseminating them via media channels in the country and thus contributing to nation-building. Yet, these values transcend beyond national frontiers, and the visibility of these values in the international arena is vital towards ensuring peace and stability in the Horn of Africa. Conversely, while room should be given to advancing the scientific advancement of research around these themes, peace, and stability in the region are critical for these endeavors. Therefore, public diplomacy activities should consider this trade-off, which is bestowed in Eritrea’s archaeological record.

On a similar account, exploring the history of religious harmony and its tenets takes us to appreciate the advent of Christianity and Islam in Eritrea. The country’s location on the Red Sea provided a gateway to both religions in the Horn of Africa. Their peaceful coexistence over millennia helped shape the present values of tolerance, human respect and dignity, and religious harmony. The preservation of paleo-Christian churches at Adulis, the Sahaba Mosque in Massawa (perhaps the earliest Islamic sacred edifice in the African continent), and several historical mosques throughout the country, well preserved early monastic traditions in the highlands of Eritrea, and archaeological records of the height of Islamic civilizations in the Dahlak Islands on the African Red Coast provide a massive repertoire of the early forms of these civilizations.

The social capital built upon the values of early Christian and Islamic civilizations is distinctive of peaceful coexistence in the society where diversity is instead a blessing than a source of conflicts. In a similar vein, preserving traditions, where religious festivities accommodate pilgrims, no matter their faith, cannot be overlooked when humanity is tested in its history by acts of global terror and fundamentalism. In summary, the ideals of the Eritrean society on tolerance and mutual coexistence exemplify the very notion of the rights of a fellow being as an individual and his/her place in the society, a vital attribute of the different codices of customary laws in the country. It transcends beyond communal or national frontiers to imply that the local notions of respect and coexistence also resemble the ethos enshrined in universal conventions. These old amenities survive the test of time, and preserving this aspect of cultural heritage in Eritrea is central to building institutions of law and order. In this respect, a broader understanding of the Eritrean society should dwell on these premises, which are also reflected in the activities of the Eritrean diaspora, to make visible the very core of these values. The wider resonance of these ethe should also serve as the conduit for inter-cultural dialogue key to building para-diplomatic engagements. One such possible future in public diplomacy involving the Eritrean diaspora thus may lie in diplomacy stressing the commonalities around these themes to better approach regional peace and stability in the Horn on the one hand and build a shared understanding of global issues with their host countries.

Similarly, Eritrea owns a rich culture of modernity as perceived in the architectural ingenuity of the late 19th and 20th centuries. Eritrea’s capital, a world heritage site, is a haven for a unique urban environment, where an experiment of modern architecture of the early 20th century mingled with indigenous African realities. The physical and social context of Asmara phenomenologically instilled a seed of cosmopolitanism, and this spirit of the city is still intact in the 21st century. Music, art, cinema, and the like that took shape in a constantly evolving urban fabric provide a façade to Eritrean realities.

When visible in the international arena can be fertile grounds for building and fostering intercultural dialogue and exchange, a diplomatic enterprise can eventually stem from these ventures. It can be said that the Eritrean diaspora has a lot to offer along these frontiers to engage in building constructive dialogue based on cultural exchanges actively. 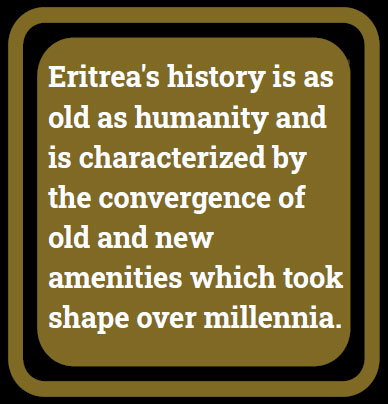 Finally, I would like to make a statement by touching upon the ethos of the armed struggle for the independence of Eritrea, in which monumental remains of the struggle bear testimony to the sacrifices paid to ensure human dignity. The struggle was a sheer response to narratives of hegemony built on myths and historical fallacies in the Horn, which denied the region’s peoples their plea for a peaceful existence.

The nation-building process that begun after the independence of Eritrea, on the other hand, to a great deal is a stride to build a proper representation of history that has been marginalized for a long. Research on archaeological heritage should foster peaceful coexistence, and the archaeological bounties in Eritrea offer a plethora of venues that contribute towards these ends. Peace is vital for these endeavors that transcend borders in the Horn of Africa. The international community should give credence to these efforts by supporting inter-state dialogue in the Horn. Recognition of the sacrifices made by the people for dignity and peace in the past thus should be made visible in the international fore as an act of public diplomacy and help build long-lasting peace in the Horn. The Eritrean diaspora stands for this cause, and its plight for peace through public diplomacy is a manifestation of the premise that a proper representation of history and understanding of the challenges in the current times is integral to finding solutions to problems in the region. Such efforts, thus, beg accommodations in foreign policy corners through intercultural dialogue.

Commemoration of 60th Anniversary of armed struggle for independence