Celebrations of “Kudus Yohannes” in Eritrea 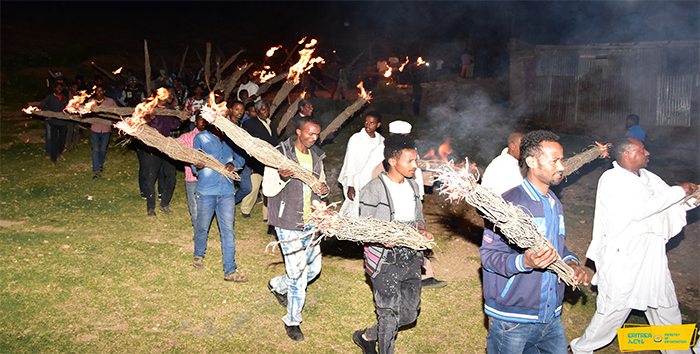 Two little kids came toward me chanting “hoye hoye” holding burning torches made of dry wood sticks. They laid their torches on the ground so that I could jump over it three times. I did wishing for the upcoming year to be a year full of health and wealth. I said “thank you” and took few steps forward. One of the kids stretched her hand. I took out money from my pocket and gave it to her as a tip. While I was standing there, their friends joined them with their drums and started singing songs praising me in exchange for some cash. They took me back to when I was their age singing songs on the eve of the “Kudus Yohannes” also known as “Geez New Year” to passersby.

“Kudus Yohannes” marks the approximate end of the rainy season and the start of a new season, a season of blooming flowers, sunny days, and pleasant weather. People leave behind the rainy season full of thunder and clouds and move on to better days. Once every September, there is a unique thing that happens that can be a reason for the holiday to be on that month. In this month the number of daylight hours and nighttime hours happen to be exactly equal across the world. During this time of the year, the sun and the moon each have 12 hours before setting on. This holiday is also represented by a perennial Leucanthemum vulgare flower, also known as “gelgele meskele” or “gift of jewel” as the flower grows densely in its full maturation during this month.

What makes this holiday unique is the fact that it is a week-long  holiday (Pagumien) full of dance, songs and bathing in holy water. People believe that everybody of water is blessed which is why they take a bath every morning in those bodies of water. Although it is not as common as in rural areas, the bathing is also seen in urban areas, especially in churches. In the urban areas, girls in particular also go to wells and sing after taking a bath. Their songs include “Thitseba do?” a word for “are you going to wash?” They do this early at dawn before people wake up and when the water is still pure and not foretasted by animals.

In the urban areas in the afternoon and evening hours, girls sing praising songs to people passing by, especially men, in return for some tips. They encircle the man and sing a song. They say, “hases indo belo jubaka” a word for “search for some cash in your pocket.” If the man gives them money they praise him saying, “ayay werki seatu drib merebiatu” a Tigrigna word for “man with a golden watch who owns two houses”. It is meant to flatter the man and get some money from him. If the man doesn’t give them some money, then they say “aya kisto ta’irifa zeytmelso” telling him he is “stingy”. So, most of the time men give the girls tips to avoid the embarrassment. There is another tradition of going house to house praising the women in the house in return for anything that might be useful for the holiday, including groceries to make some dish for kudus Yohannes. The girls sing songs like, “nwedsen nwedadsen abbey alewa nsen” meaning “where are they (women of the house), let’s just praise them”. The women being praised may give them some food such as cereals; but if they don’t, the girls tease them by saying, “abti qofo zelo awxiyo telo” meaning “bring out the cereal that is inside the bin”. This way the girls collect money and some food for their one-week holiday in the urban areas.

Boys go out to collect sticks to make a torch for the eve. Making the torches and burning them indicates the transition from rainy season to a year with sunshine bountiful harvest. On the eve, they prepare a ceremony with a traditional food named “Qatenia” made with injera (flat bread) sprinkled with melted butter and pepper. The girls wait for the boys in the center of the village until they make their round with their torches on. The first place they go to is the church. They line up and go rounding the church chanting “hoye hoye” three times. Eventually they come to the central part of the village where the girls are waiting. They dance, sing and play games till dawn. Some of the songs played include, “thambeleye tehambeleye kemzia ilna bhburna aynfelale” indicating their unity and love. Another popular song is “Nxawet emo ntehawawese zemen kmlese” meaning let us just play so that the good times would come back. They have fun from dusk till dawn.

On “Kudus Yohannes” families usually gather for meals. The feasts are magnificent and there is so much to eat and drink. As a kid I remember visiting my grandmother in the evening hours to eat chicken stew and have coffee with her. Just like my family, most families visit one another on this day giving gifts and having delicious food. In the morning, the first thing you see in every household is a sheep, a goat or a hen being slaughtered for the holiday. The males in the household take care of the slaughtering of the animal while the girls cook. After that what remains is for the family to wear new clothes and gather around for a meal where you sometimes see the family members feeding each other as a way of showing affection and love. This is followed by the beautiful event of the day–coffee ceremony. Served with popcorn, candies, biscuits, and fruits and accompanied by the pleasant frankincense aroma the ceremony goes on till everyone gets tired and goes to bed. The holiday ends after a week-long celebration.