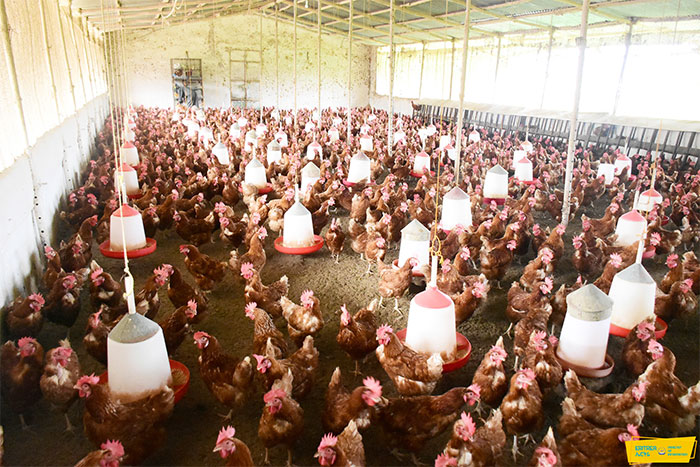 Adal Poultry Enterprise was established more than 20 years ago at the outskirts of the town of Keren. “Good things come to those who are prepared to work hard on their goal,” says Mr. Omer Yessuf, the acting manager of the firm. We have conducted a brief interview with him, and the excerpts follow.

The enterprise was established in the year 2000 with a 600 thousand capital, which has now grown to more than five million Nakfa. Initially, poultry farming was perceived as an impracticable and difficult enterprise considering the losses farmers were experiencing. However, determined to grow and expand in this sector, Adal Poultry Enterprise has been exemplary in the commercial poultry farming sector.

“Initially we started the business with around 2700 chicks bought from private hatching enterprises at small poultry houses. Currently we are operating with around 18 thousand chickens. The chicks were originally imported from countries such as Holland, Germany and Hungary. But with the advent of the bird flu we are limiting our sources in line with the Ministry of Agriculture’s (MoA’s) plan to control diseases. As a result, the diseases have become known and easy to administer,” says Mr. Omer.

Animal feed for the chicken come from different sources. From 2001 to 2011 it was bought from plants such as Dibarwa Animal Feed Plant. But since 2011 the enterprise has been producing feed for its own use. The price of chicken and eggs is greatly influenced by the price of feed at the market. When the enterprise started to produce on its own, it became possible to store feed for a longer period of time and therefore avoid the market price instability, which indirectly influences the price tag of their produce. They also buy milled fish from the Department of Marine resources and calcium from Ghedem Gement Factory.

This has enhanced their ability to manage the content of feed which is tested in a laboratory. Accordingly, they feed the chicken 18 percent milled fish, 12 percent byproduct of sesame, one percent calcium and 70 percent sorghum. They utilize chopped straw from their farm to bed the chicken. The chicken are always locked inside and they must check the floor continuously. Mr Omer says “the floor has to be dry always and if it gets wet it’s an indication that there is an issue”.

Mr. Omer said that during the on-going COVID-19 crisis, the enterprise made big profits as the supply of chicken was very limited and the chicken they produced fetched more remunerative prices. Presently, the firm is earning around one million Nakfa before tax. In the coming year they have a plan to expand their ventures to include chicken production intended for meat. Mr. Omer says this will be very lucrative because these chicken are ready for sale within 45 days.

Mr. Omer holds a firm opinion that any work that began with enthusiasm and zeal bears the fruits of success. In the present scenario, he calls on farmers not to depend only on one type of activity but to add various supplementary enterprises to the existing one to raise the farm’s income and attain the government’s aim of achieving food security. “When we started as a small scale poultry farm for meat and egg production, we also included dairy farm. Currently we have more than twenty cows,” he says.

Moreover, in the context of the enterprise they are operating, Mr. Omer is of the opinion that sanitary practices are key to the success of poultry farming as it minimizes the incidence of diseases. If you can keep the chicken disease free, you can make profit. “After starting the business and we experienced a lot, we have acquired more knowledge on how to keep chicken. We always learn from our mistakes. We have experienced diseases in the past and incurred enormous lose on our business. This was because it takes time to identify the diseases and apply the necessary medication,” says Mr. Omer. In order to avoid this they follow cautious procedures in the feeding system, poultry housing, ventilation and the chicken’s exposure. They also vaccinate the chicken regularly. Though they have no particular vet that they work with, when there is an issue they are helped by experts. Under normal circumstances, all of the feeding and vaccinating is supervised by him. The chicken begin to be vaccinated right from their early age.
Mr. Omer said that they have a plan to expand the capacity of their poultry farm to 50 thousand egg producing and ten thousand chicken intended for meat production step by step in different phases. 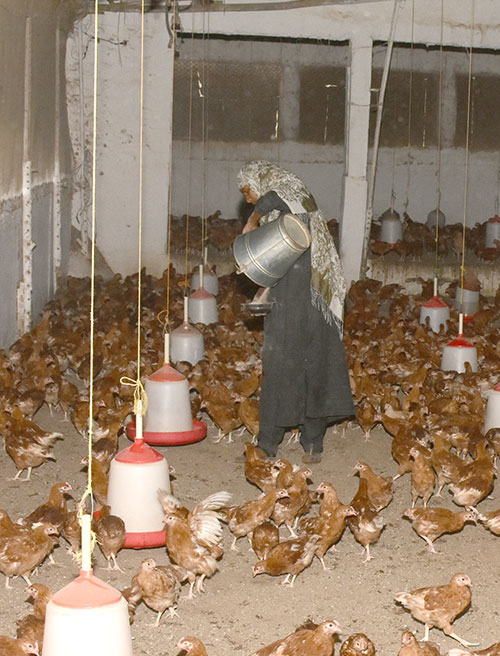 When asked why in phases, he said they will invest their savings from the enterprise itself for expansion without financial assistance from other sources. He also said he wants the MoA to launch innovative programs for small scale poultry farmers. He is happy that the government has now initiated programs to assist small scale poultry farmers and interested households which he envisions will further help in the expansion of poultry farms in rural areas.

Mr. Omer offers his advice to interested start-ups who engage in poultry farming. He says that the imported chicken are different from the indigenous chicken which are more resilient. Those who want to invest in poultry must first learn how to manage chicken and consult experts. This will help them avoid unnecessary and unexpected losses.

Mr. Omer concluded by saying that their enterprise is a proof that if one is determined, success is inevitable even under the most adverse conditions. He has high expectation from the government to provide subsidy on the purchase of chicks and feeds for small scale poultry farmers. Besides, he hopes to see a hatchery established for the production of good breed of chicks suited to the different climate conditions in the country.

Adal Poultry Enterprise, which has given job opportunities to around 50 workers, has outlets in Keren and Asmara where eggs are sold at fair prices.