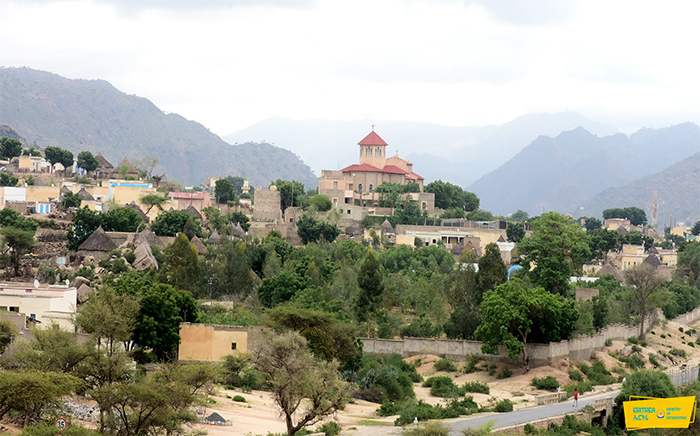 There is a general consensus that basic social services are the building blocks for human development. Indeed, they are now accepted as fundamental human rights. The lack of access to basic services is measured by the human cost: the lives lost, children out of school, and people without access to safe water and sanitation because they lack basic social services. The Government of Eritrea has pursued a cautious path to avoid this problem and invested heavily in remote areas. As a result, the rural-urban development gap has gotten very narrow over the years. Today, we will take you to Elabered sub-zone and look at the development initiatives.

Elabered sub-zone is one of the eleven sub-zones in Anseba region. It is bordered by the sub-zones of Gheleb in the north, Adi-tekelezan in the East, Logo Anseba in the West, and Hagaz in the South. It is inhabited by around 37 thousand people in 14 administrative areas. Elabered sub-zone covers an area of 63,590 hectares, of which around six thousand hectares are suitable for agriculture. Though the topography of the sub-zone features mountainous areas, it is endowed with fertile farmlands and there are places where intensive agriculture is practiced along the river banks, the Elabered Estate being a primary example. Agriculture is the main practice of the people and mainstay of their socio-economic structure, while a small portion of the people in the sub-zone is engaged in trade and other activities.

Farmers grow a variety of crops, cereals, fruits, and vegetables. Elabered and its vicinity are one of the top vegetable-producing areas in the country. The product is supplied to surrounding markets and Asmara. This season, farmers of the sub-zone are expecting a bumper harvest thanks to the good rainfall.

Mr. Seltene Gaim, Head of the Ministry of Agriculture (MoA) branch in the sub-zone, said that agriculture experts from the MoA carry out regular extension activities to enhance the production capacity of farmers. Some of the commonly seen problems among farmers were the practice of mono-cropping, unwise use of pesticides and herbicides, planting the same vegetable in one season which leads to market oversupply and eventually cheap price for the product which exposes the farmers to unnecessary post-harvest losses. The farmers are now advised to apply compost fertilizer because the artificial fertilizer could increase the salinity of the farms in the long run.

Mr. Meharena Tekleab, Administrator of the sub-zone, says it is evident that education is important in reducing poverty and enhancing the overall quality of living. In Elabered sub-zone, there are 41 schools that range from primary to secondary level. In the previous academic year, around ten thousand students were enrolled in all of these schools. A new school for Down syndrome students has also been opened last year. According to documents from the Ministry of Education (MoE) branch in the sub-zone, this year alone, more than 500 inhabitants attended a crush program as part of the campaign to eradicate illiteracy and support the students who were unable to start education at proper school age.

The participation of females is increasing compared to the previous years. This year, females comprised 42 percent of the enrolled students. The Ministry of Education branch in the sub-zone works closely with all related stakeholders to tackle problems related to enrollment of female students by raising awareness on the importance of education in boosting social and economic development.

Similar considerations apply to access to health care. There are four health stations and one community hospital in the sub-zone. Mr. Alazar Haile, Medical Director of the Ministry of Health (MoH) in the sub-zone, indicated that there are areas where additional health facilities are needed, the quality of health service delivered is being improved from time to time. All of these health institutions were built over the last independence years and this locality was one of the areas that were deprived of basic social services.

The remote areas are reached by barefoot medics and through outreach campaigns. Elabered sub-zone is one of the areas where the malaria disease was very common due to its location in the lowland area. The MoH has been able to control the prevalence of this disease by training the barefoot medics and unremitting awareness-raising campaigns.

Access to clean water was a big challenge in the sub-zone for some years. Currently, 13 of the 14 administrative areas have access to clean water supply which are powered by generators and solar energy, and some are operated by hand pumps. Various water-conserving schemes have been implemented and the overall water scarcity problem has been solved. Continuous work is also being carried out to clear up the water reservoirs filled with sediments. Due to its location along the Asmara – Keren route, the transportation services to and from the subzone are very good. The villages around are connected through dirt roads and the local inhabitants in collaboration with the administration often engage in renovation activities whenever they get flood eroded. Electricity is available in all six administrative areas and the town itself and work are underway to expand to the local villages that are yet to be connected to the national grid. Telecommunication service is largely available except in small pockets. The expansion is underway to reach inaccessible areas.

The famous Debresina Monastery which was once the site of the first Holy Communion prepared in the Eritrean Orthodox Church, by the 4th-century bishop Aba Salama, is found in this sub-zone. The monastery is also a site of a pilgrimage each year in June.

Elabered sub-zone has a very strategic location and with the growing access to the necessary services, it could be a hub for agriculture and tourism of the Anseba region.