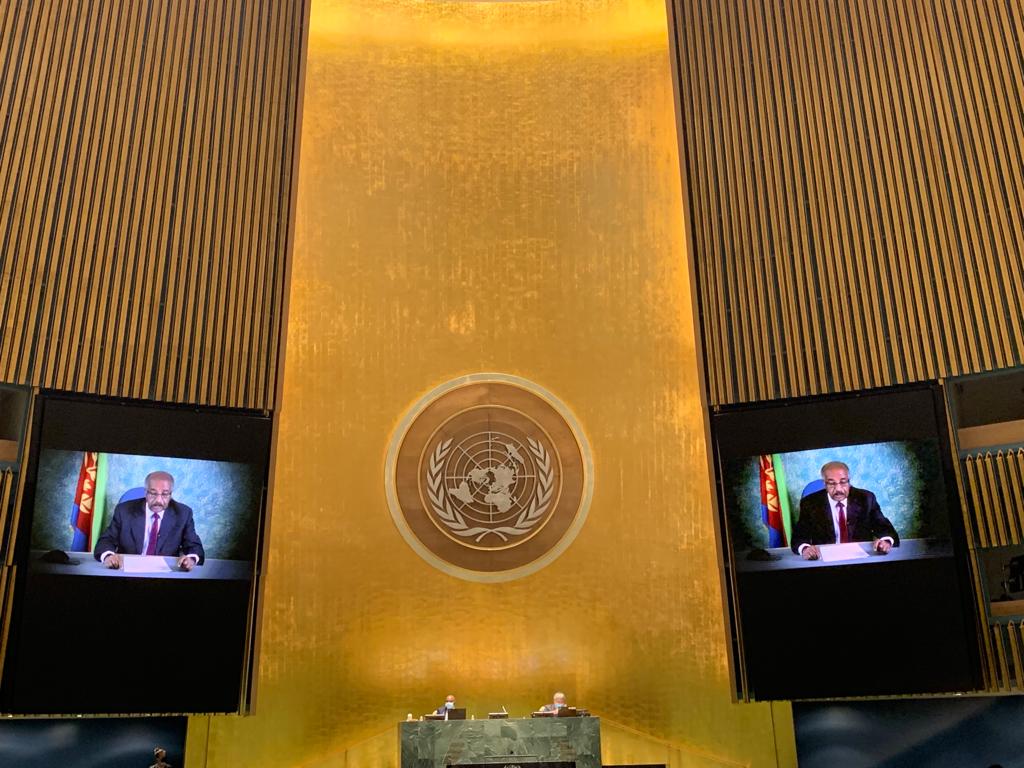 President of the General Assembly;

Secretary-general of the United Nations;

It is an honor for me to address this august Assembly of States – albeit virtually – on behalf of the President of the State of Eritrea, H.E. Mr. Isaias Afwerki.

In this regard, allow me to congratulate Your Excellency, on behalf of the Government and People of Eritrea, on your election as the President for the 76th Session of the United Nations. You have our full support as we are aware of the enormity of your responsibilities.

I also wish to express our deepest gratitude to your predecessor, His Excellency Volkan Bozkir, for his astute leadership and successful conclusion of the 75th session.

These are crucial, and in many respects, unprecedented times.  Our global community is facing triple challenges of enormous gravity; i) the COVID-19 pandemic whose deadly virulence continues unabated in many places; ii) spiraling climate change that threatens our very survival; and, iii) growing risks of dangerous international rivalry and commotion rooted on dynamic changes in the global balance of power.

These grave challenges have accentuated some basic truths.  They have amplified the flaws and inadequacies of conventional wisdom on certain economic models. They have exposed structural deficiencies in the parameters of global and domestic governance hitherto portrayed as universal and unassailable both in terms of their universal validity and applicability.

Leaving aside the deleterious consequences of the Cold War, misguided policies pursued in its immediate aftermath by Special Interest Groups in the US and Europe to maintain and consolidate a Uni-Polar global order did not usher in a period of international stability and prosperity that would, as it was argued, cascade down to different parts of the world to promote steady social and economic progress.  As it happened, even in advanced countries, income disparity between the rich few – less than 1 percent of the population – and the majority of other citizens has become ludicrously huge and morally reprehensible with unhealthy social ramifications.

At the international level, heavy-handed policies of containment and encirclement to forestall healthy strategic competition and mutual progress based on symmetric, equitable, and rules-based international system has, and is stoking, a climate of confrontation and instability with all the risks that this may entail in the period ahead.

In the event, it is incumbent on all of us to climb down from our high horses and ponder on these issues in a holistic manner; with requisite earnestness and sincerity.

As I intimated above, our world is still dealing with a deadly pandemic. The theme for the 76th Session, “Building resilience through hope – to recover from COVID-19, rebuild sustainably, respond to the needs of the planet, respect the rights of people, and revitalize the United Nations” is, in this sense, apt and optimistic.  But as you know well, the realities facing humanity today are dire and many.

Let me take the opportunity to convey my condolences to and express my solidarity with all Member States and all the families of those who have lost loved ones due to the COVID-19 global pandemic.

Whether meeting internationally agreed development goals, combating the growing threat of climate change, or responding to the range of threats to international peace and security, the enormity of today’s global challenges call for a stronger United Nations that is more representative, transparent, and most importantly, effective.

As we stated last year, the pursuit and ideals of enduring global peace, stability, and prosperity are squarely predicated, and can only flourish, on the edifice of a robust global organization that can measure up to all these challenges. This indelible fact is more evident than ever before.

In the event, allow me to renew our call for the strengthening and revamping of the UN system whose authority and efficacy have been corroded in past decades. Unfortunately, multilateral institutions have been rendered impotent, due to the unilateral actions of a select few.

In the Horn of Africa, economic problems due to the COVID pandemic have been compounded by a dangerous conflict that stems from decades of misguided policies by certain major players as I will elaborate later.

To this, one must also add growing tensions we have witnessed in the past months in the wider region on issues of the border dispute and the Renaissance Dam.  In Eritrea’s view, these are not intractable problems beyond direct resolution by the parties concerned through political goodwill and good-faith negotiations to advance mutual and long-term benefits to all the principal stakeholders.  In regard to the Renaissance Dam, in particular, acrimonious and internationalized forums will likely hinder an enduring and comprehensive arrangement that addresses the requirements of the principal riparian States – i.e. Ethiopia, the Sudan, and Egypt –   within a framework of robust and long-term cooperation and available technological options and solutions.

As Your Excellency will recall, the Joint Declaration of Peace and Friendship that Eritrea and Ethiopia signed in July 2018 had ushered in a new epoch of hope and optimism.  The significance of this historic achievement was vividly visible in the massive euphoria that it generated among the peoples of Eritrea and Ethiopia.

But the TPLF group could not accept and fathom the present realities.  It thus embarked on multiple acts of subversion both to scuttle the Eritrea-Ethiopia peace process and to regain power in Ethiopia through forceful means.

In Ethiopia too, the TPLF resorted to various illicit subterfuges to roll back the positive process underway through a popular will.  And as a culmination and dangerous escalation of its subversive measures, it unleashed a massive War of Insurrection against Ethiopian’s Northern Command with the express aims of neutralizing this biggest contingent, confiscating its weaponry, to thereby forcefully seize power in Ethiopia.  TPLF’s aims included subsequent military acts of aggression against Eritrea.

The grave danger that these reckless and illicit acts by this rogue group to Ethiopia, Eritrea and the Horn of Africa region as a whole is too evident to merit further elaboration.  But what we find inexcusable is the position of certain countries, notably the US and its European allies, to defend the TPLF’s illicit and dangerous acts of insurrection and mayhem and marshal all the tools at their disposal to rehabilitate it at any cost.  I will not waste your time here to recount the false narratives they have floated to create a moral equivalence between the principal culprit and those compelled to take deterrent and reactive action warranted by international law and established State practice.

This act in itself underlines the structural inadequacy of the global governance system that I intimated earlier in my speech. Eritrea has suffered enormously by similar previous acts.  These should not recur again.   The injustices meted on Eritrea by powers who feel they can trample the sovereignty of nations and peoples at their whim must indeed come to an end.

“Our actions are our future. Better production, better nutrition, a better…