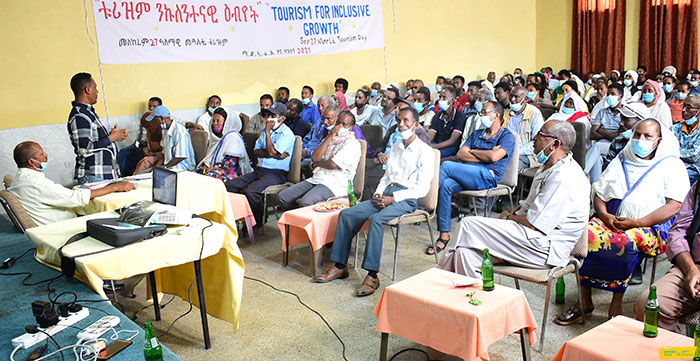 Asmara, 27 September 2021 – September 27, World Tourism Day 2021 was observed at a national level in the Anseba and Southern Red Sea regions under the theme ‘Tourism for Inclusive Growth.’

In the commemorative event that was held in Keren, Anseba Region, a number of owners of social service provision institutions, heads of the Ministry of Tourism branches, representatives of the Municipality of Keren, and other stakeholders took part. Participants conducted extensive discussions on strengthening the Anseba Region Tourism Service Provision Association.

Speaking at the event, the Chairman of the Association, Mr. Fikreyesus Berhane stating the tourism services the member institutions provide and the employment opportunities they create, expressed conviction that the Association will strengthen effort in promoting tourism potentials.

Mr. Fessehaye Habte, head of tourism resources research and supervision branch at the Ministry of Tourism branch in Anseba Region on his part stated that the people and Government of Eritrea are working on promoting Eritrea’s tourism potentials and making the country a tourist destination.

The Director-General of the Department of Tourism in Anseba Region Mr. Salem Ali Salem on his part commending the effort the Regional Association of the Tourism Service Rendering Institutions conducted during the era of the COVID-19 expressed conviction that the department will exert effort to alleviate challenges the association is facing.

In a similar commemorative event held in Assab, Southern Red Sea region, Mr. Abdela Hizam, from the Department of Tourism in the region highlighted the significance of the tourism sector in the overall development task and underlined the collective efforts need to be exerted so as to take Eritrea’s tourism sector to a higher level of standard.