Developing China and Benefiting the World 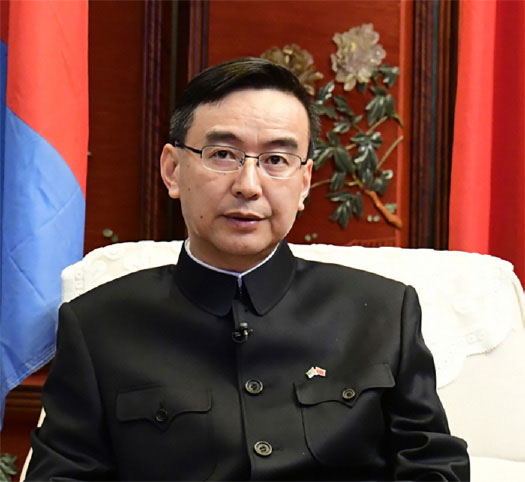 China will celebrate the 72nd Anniversary of the founding of the People’s Republic on October 1st, 2021.

After 72 years of continuous struggle, China has created two miracles: rapid economic development and long-term social stability. In 1949, China was poor and blank, with a per capita GDP of less than 70 U.S. dollars and an average life expectancy of 35 years. Today, China has become the world’s second largest economy, largest industrial manufacturing country, and largest goods trading country. China’s output of more than 220 industrial products ranks first in the world. The total number of scientific research personnel and patent applications for inventions of China also ranks first in the world. The Communist Party of China (CPC) has led the Chinese people to realize the First Centenary Goal of building a moderately prosperous society in all respects. All the rural population has been lifted out of poverty as defined by the existing standard. The world’s largest social security system has been built. Through the arduous efforts of people of all ethnic groups across the country, China has achieved economic growth and maintained social stability and development while fighting the COVID-19 pandemic.

In the past 72 years, China has always been a builder of world peace, contributor to global development, defender of international order and provider of public goods. China is the largest contributor to peacekeeping operations among the permanent members of the UN Security Council. With contribution of more than 30 percent annually to world growth and as the largest trading partner and largest export market for more than 130 countries and regions in the world, China has become the main anchor and powerhouse in the world economy. Taking active steps to combat global climate change, China has fulfilled its international commitment to reduce carbon emissions by 2020 ahead of schedule. In addition, it has pledged to peak carbon emissions before 2030 and achieve carbon neutrality by 2060. China has also announced it would step up support for other developing countries in developing green and low-carbon energy, and would not build new coal-fired power projects abroad. China is also making outstanding contributions to world public health security. Since the outbreak of the COVID-19 Pandemic, China has been providing timely assistance to the international community. By now, it has provided medical supplies to 150 countries and 13 international organizations, dispatched 37 medical expert teams to 34 countries, provided close to 1.2 billion doses of finished and bulk vaccines to over 100 countries and international organizations, and will step up efforts to provide a total of two billion doses to other countries in the course of this year. In addition to donating 100 million US dollars to COVAX, China will donate 100 million doses of vaccines to other developing countries in the course of this year. At the same time, taking an open and scientific attitude, China will continue to support and engage in global science-based origins tracing, and stands firmly opposed to political maneuvering in whatever form, to the so-called report compiled by the U.S. intelligence community and to U.S. slandering and attacking China on this issue.

First, the CPC always serves the people wholeheartedly. Putting the people first and firmly relying on the people, the CPC has united and lead the people to achieve great achievements one after another.

Second, the CPC works tirelessly to realize its ideals. By insisting on proceeding from reality in everything and leading the people to explore and move forward with unrelenting courage, the CPC has pioneered a path of socialism that is distinctively Chinese, which has refuted the myth that modernization can be achieved only by following the capitalist model.

Third, the CPC is of robust leadership and strong governance ability. Centralized leadership by the CPC serves the best interests of the Chinese people, suits China’s national conditions, and conforms to Chinese history and traditional culture. The CPC has won widespread support from the people.

Fourth, the CPC has always maintained its vigor and vitality by self-reform, self-purification and self-innovation. The CPC takes resolute measures against all phenomena that may undermine its integrity and progressive nature, exercises effective self-supervision, practices strict self-discipline in every respect, strengthens checks and scrutiny over the exercise of power. The CPC has allowed no safe haven, left no ground unturned, and shown no tolerance in fighting corruption, preventing or punishing any action that creates barriers between the Party and the people or infringes on their interests.

Fifth, the CPC contributes to world peace and development. The CPC is a political party that seeks happiness for the people and progress for humanity. Taking a clear-cut stance against hegemony and power politics, it adheres to the path of peaceful development, firmly upholds the international system with the United Nations at the core, promotes democracy in international relations, presses for a new model of international relations based on mutual respect, fairness, justice and win-win cooperation, and promotes the building of a global community of shared future. At the General Debate of the 76th Session of the United Nations General Assembly, President Xi Jinping noted that, right now, COVID-19 is still raging in the world, and profound changes are taking place in human society. The world has entered a period of new turbulence and transformation. It falls on each and every responsible statesman to answer the questions of our times and make a historical choice with confidence, courage and a sense of mission. He also stressed that mankind must beat COVID-19 and win this decisive fight crucial to the future of humanity, must revitalize the economy and pursue more robust, greener and more balanced global development, must strengthen solidarity and promote mutual respect and win-win cooperation in conducting international relations, must improve global governance and practice true multilateralism.

China and Eritrea enjoy profound traditional friendship. Our two countries have always respected and treated each other equally, supported each other on issues concerning each other’s core interests and major concerns, and jointly safeguarded the common interests of our two countries and international fairness and justice. China cherishes the traditional friendship with Eritrea, admires the development progress achieved by the Eritrean people, understands Eritrea’s difficulties, respects Eritrea’s policy of independence and self-reliance, supports Eritrea’s efforts to safeguard national sovereignty and efforts made for social and economic development, and opposes sanctions or threat of sanctions against Eritrea. China is willing to continuously deepen and expand bilateral friendly cooperation in various fields for the benefit of our two peoples. Chinese and Eritrean peoples were, are and will always be good friends, partners and brothers helping and supporting each other.