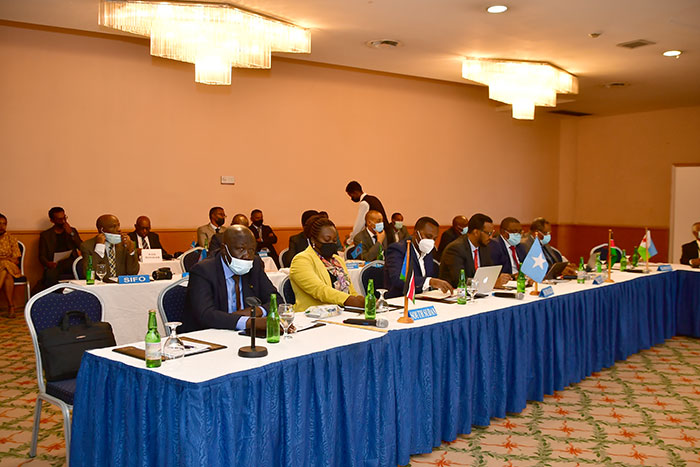 On October 4, 2021, the Ministry of Agriculture Eritrea (MOA) convened the 66th Regular Session of The Executive Committee of the Desert Locust Control Organization- East Africa (DLCO-EA) at Asmara Palace Hotel.

The five-day conference was scheduled to be held in Asmara in 2020, but was postponed due to the COVID-19 pandemic.

Since its establishment in 1962 in Ethiopia, Addis Ababa, the Organization has set out to fight the damages that are posed by desert locusts and other mandated pests; that is, Tsetse fly, African Armyworm and Quelea bird.

Hence, the major objectives of the DLCO-EA are promoting the most effective control of the desert locust and working to coordinate and strengthen national action against desert locusts in the Region. In addition, it works to encourage pest control operations and forecast methods against infestations of the Desert Locust and other migratory pests especially the African Armyworm, Quelea Bird and the Tsetse fly.

Desert locusts and the mandated pests are either migratory or locally bred at a very shocking speed and can eliminate a given farm land in a very short time. This makes the threat something that cannot be faced individually. It was in realization of the advantages of collective efforts that the East African countries initiated the idea of combating this destructive natural challenge by joining hands.

According to the opening speech of the Director General of Agricultural Inspection at the Eritrean Ministry of Agriculture (MOA), Mr. Hirui Asgedom, East Africa is one of the areas in the world that is prone to locust and pest attacks. And Eritrea as a front-line country is faced by annual Desert Locust infestations.

Mr. Hirui said that Eritrea has an area that totals to 7 million hectares which is conducive for summer and winter breeding of Desert Locust in varying intensity.

The desert locusts and its likes are not controllable with sole efforts and the DLCO-EA, in spite of its challenges has been striving to combat the natural hazard since its foundation.

Mr. Hirui pressed on the devastating desert locust invasion of the year 2019-2021 that extended for two seasons in the region. He said that some of the countries encountered such invasion after more than seventy years and it was quite a disaster.

The 66th Regular Session was held in two parts: it started with the Executive Committee annual session on October 4 and continued with the Ministerial Meeting on October 7, 2021.

Mr. Hirui then presented a report on what strategy the MoA used to control last year’s invasion and recommended a way to revise the prevention and control strategy of the DLCO-EA to properly assist the member states.

The Eritrean Minister of Agriculture, Mr. Arefaine Berhe, also in his remark on the Ministerial meeting on October 7, 2021, welcomed the committee in the name of the Government of Eritrea and addressed key incidents of the past two years.

The Minister also reported on the general Eritrean desert locust control strive and current updates regarding the issue at hand.

The report was accompanied by a short video of a success story that clearly illustrated the 2020-2021 infestation in Eritrea and how the MoA has put it off with minimal loss. He said that though the attacks had a severe damage in many parts, Eritrea had managed the upsurge with relevant preventive and ground control strategies and dedicated support of the youth and community at all sectors of the nation.

“We are holding this session in the aftermath of a terrible locust upsurge that has caused huge damage on crops and range-lands in our region and the COVID-19 pandemic that is still prevailing.”

“This experience and those before dictate us to put our best practices together in order to effectively win the battle against DLCO’s mandated pests in general and desert locust in particular”, added Mr. Arefaine in his speech.

He also said that crop loss due to pests and diseases accounts for 30% of all the total crop loss in the world. That is why countries need to work in organization to save as much food as they can and combat drought and famine, which is one of the Sustainable Development Goals (SDG) for which the whole world is called to action.

Dr. Stephen Njoka, Executive Director of the DLCO-EA, in his speech also said that the concerned bodies of the affected countries with regional organizations have been working in coordination to train desert locust officers, organize survey and control teams and deploy ground and aerial logistics to curb damages.

Dr. Njoka, in his interview with the Eritrean media applauded the efforts of the Eritrean government and the success it has achieved so far in combating the desert locusts and the other three pests. He simply put it as, “Thumbs up! Eritrea”

Though a lot of material, man power, chemicals and many other resources was invested and mobilized by the member states, the threat is still an ongoing issue in some places. That is why Dr. Stephen Njoka called for all the member states to strengthen their engagement and keep fighting by integrating their resources, information flow and work on capacity development and preparedness to combat upcoming surges in desert locusts.

After reporting on the current situation of all the mandated pests, the committee discussed the major funding, finance, current material capacity and pending aid, management, administration and other intra-organizational issues. Moreover, the Chairman of the Executive Committee, Mr.Collin pressed more on the ongoing challenges of the organization and some recommended patterns of engagement inside the organization and with external partners.

“Take One Step and the Other Foot will Follow”  Dr. Eden Tareke