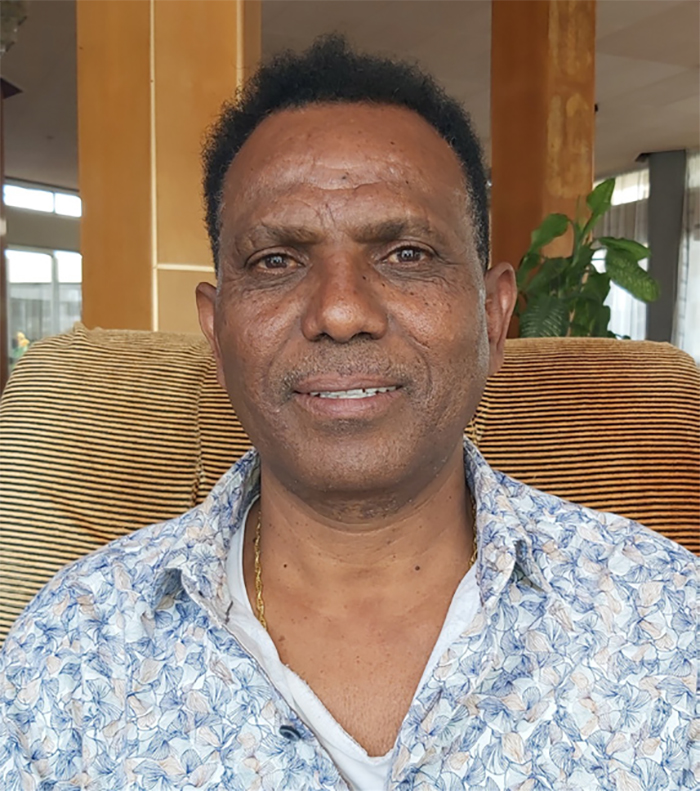 Andom Ghebreslasie (Wedi-Khesi) is mostly known for his popular song titled “Embatat Adey”. In his early childhood, he learned a great deal of oral literature from his family members. Playing the “Kirar,” a traditional stringed musical instrument, helped him join a cultural troupe during the struggle for indepen­dence. He believes that Eritrea’s modern and traditional songs of the 1960s were inspirational for his artis­tic works. He spends his spare time reading books, which, he says, takes him to another sphere of imagina­tion. The accumulated experience in writing and producing songs enabled him to think about giving an account of his experience and that of his comrades in the battlefields in a book written in Tigrinya titled ‘Toff,’ roughly translated as ‘Errand.’ The book has recently been translated into English and is expected to be inaugurated on 23 October in Asmara. Mr. Andom has donated 10% of the income from the sales of the Tigrinya version of the book to martyrs’ trust fund, 10% to the Association of War Disabled Veterans, and 5% for initiatives dedicated to the empowerment of the youth.

During the struggle for independence, poetry, music, and literature, in general, that were flourishing in the 1980s and the mastery I had in playing the Kirar in 1983 was the motive behind all my work in music. The struggle enabled me to strongly believe that nothing is impossible. The day-to-day activities in the trenches and throughout the battlefields were filled with exceptional happenings. Every moment was a platform for a practical learning experience and a school for my artistic works. I also used to write poems; some were depictions of post-independence Eritrea.

‘Filmawit Selam’ was my first album published in 1995. After the referendum was held in 1993, in the period between 1993 and 1995, the military unit I was a member of helped me in all my musical works. For me, ‘Embatat Adey’ was unique. The song was about trenches and mountains of heroic feats. Names of the mountains mentioned in the song were extracted from the annual calendar published by the EPLF. The year 1998 was a turning point in my career as a musician. I released my second album, ‘Jentra’ and ‘Genet Eye Fqri’ (love is heaven) was my third album. I’ve also released around 52 singles in connection with Martyrs’ Day. I was mostly interested in music but I found it very hard to present details of historic facts in songs that each last five minutes. That is why I started writing.

Our songs have been stolen and our history has been rewritten using false narratives. I read some books in Amharic language that twist the true narrative of our heroic deeds and our perseverance against all odds. Eritrea’s 25th Independence anniversary was a turning point for me as far as my interest in writing is concerned. There was an event I attended in connection with the 25th anniversary and the recommendations forwarded on the occasion were wake-up calls for freedom fighters to write accounts of their experiences using whatever resource they have at hand.

It is sad that a number of freedom fighters have passed away without writing a single account of their experiences. At the very beginning, it was really hard for me to write a book based on the true stories of freedom fighters and to select an appropriate title. I also thought various themes had already been reflected in many literary works and music. Therefore, I decided to write about Toff, an errand to and from different command posts of the EPLF. The errand men and women had to travel, often on foot, days and nights to deliver critical military messages and at times they would fall into the enemy’s trap and at other times might be devoured by wild animals. There were freedom fighters who delivered such decisive messages more than 100 times. Toff for the EPLF was more like DHL. I wrote Toff on my mobile phone after attending a writing course in Norway.

Writing, publishing, and distributing a book abroad is very challenging. You are away from home and you don’t have much time to spare to be able to write and publish. But the strong support of my wife and the encouragement I received from Eritrean communities around the world helped me to write and publish the book. Many people participated in the making of the book. The book was first inaugurated in Eritrea and the ceremony was quite amazing. I was accorded warm support from the Eritrean people. After all, the book belongs to the people and I was right in my decision to donate around 25% of the income from the sales of the book to the people.

There were concerns from my friends and my fans that I may get lost in writing books. But I decided to keep the balance. I still work in music and I also give lyrics to artists. 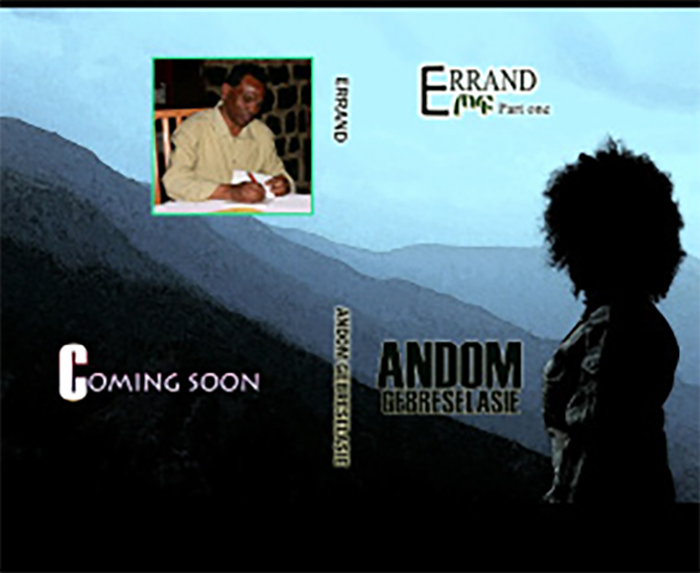 The book is based on true stories. Being an errand man or woman during the struggle for independence was considered by the freedom fighters a rare opportunity. The idea in writing the book was to develop the theme through actual stories of errant men and women. The martyrdom of married couples while performing their duties in errands, the fight against nature, and the fight against wildlife and against all odds are reflected in the book. The stories are developed with factual images, factual stories of freedom fighters, and factual political situations. Difficult-to-believe heroic deeds of freedom fighters, particularly that of the errands men and women, are the major contents of the book. The stories of the errands will be represented better in the second volume of the book, ‘Toff 2.’

For many Eritreans abroad the expressions, proverbs and some words used in the book are quite difficult to comprehend. So, these Eritreans repeatedly asked me to translate the book into English, which I did in response to their requests. The translated version is likely going to be more accessible to Eritrean communities around the world. It took around two years to complete the translated version of the book.

The essay was written in 1988 after the war that liberated Afabet and during the battle for the liberation of Keren. Independence was inevitable in the hearts and minds of all freedom fighters. But we were not sure who would remain alive to see Eritrea’s independence. We were also certain that not all freedom fighters would be soldiers in the post-independence period as most would be in other professions of their interest. This is the idea reflected in the essay, that post-independence Eritrea would provide multiple opportunities for all Eritreans.

The English version of the book was sent to me and I was very surprised to see the accuracy, which is a reflection of the dedication and professionalism of its translators. Despite the challenges they faced in understanding and translating some expressions and proverbs into English, they managed to translate them without affecting the flow and vitality of the core ideas. Writers in the English language who read the translated version are appreciative of the work done. Some diaspora Eritreans actually told me the book is more readable in English than in Tigrinya. Some native speakers of English also said that the book is well written. 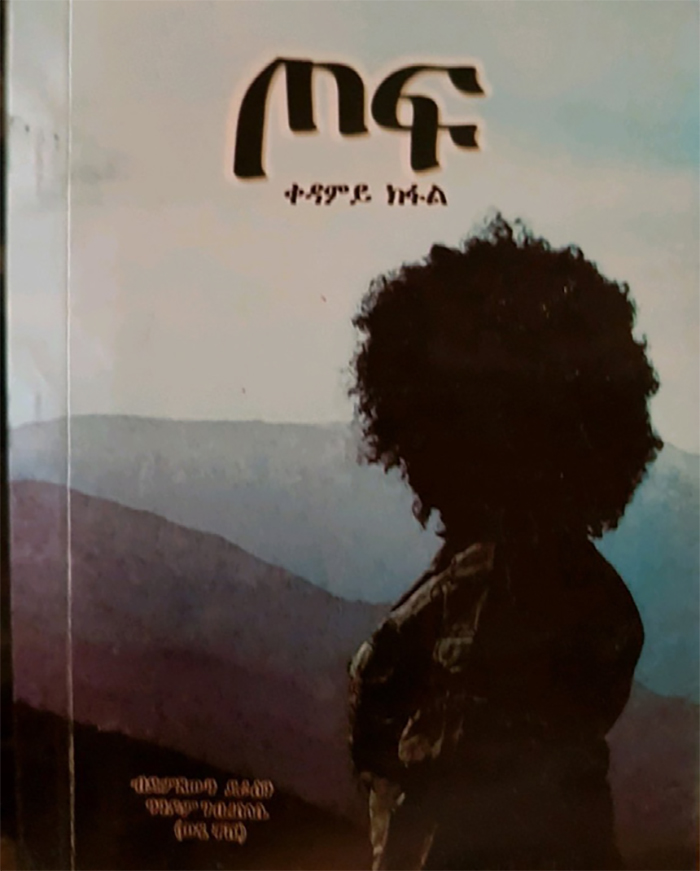 Yosief was a great help for me in both the Tigrinya and English versions of the book. You can hear from him about the translation process.

The translation of the book was teamwork that started later in 2019. The expressions and proverbs the writer uses in the book were very challenging to translate. The outbreak of COVID-19 was also another challenge. But the commitment of Rahwa Dawit, Kisanet Haile, and Aster Mehari in translating the book made it possible to publish it within two years.

The book is about Eritrea and its owners are the Eritrean people. The stories presented are the history of the Eritrean people and the noble values portrayed there belong to the people. That is why I decided for the inauguration of the translated version of the book to be held in Eritrea. I would like to use this occasion to call on all freedom fighters to document the miracles of the struggle for Eritrea’s independence before it is too late.